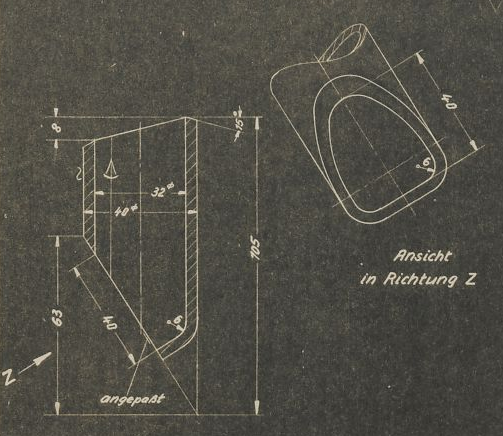 The part above is from 1944 V2 plans which I am using as real world practice examples to teach myself 3D modeling using Inventor LT 2021. Therefore there is no original designer/engineer I could got to for clarification.

I started out by drawing up the section on the left in a 2D sketch and then added some cutting shapes. 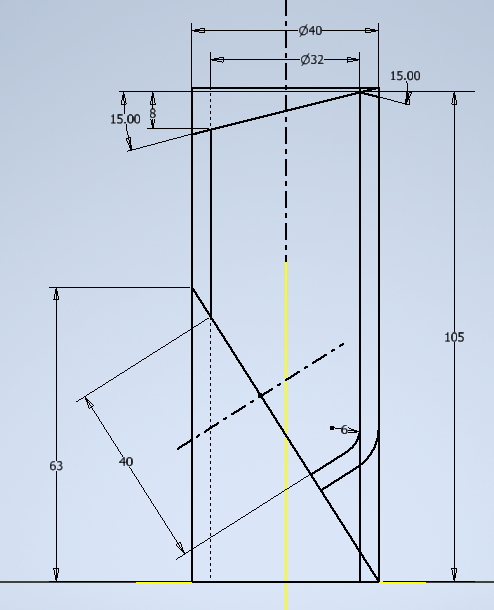 I then revolved the large rectangle on the right side to generate a section straight pipe. I followed this up by extruding triangles at the top and bottom to generate the angled cuts.

I then proceeded to create a work plane on the face of the lower cut and proceed to added two shapes. The first to be essentially a plate to be extruded into the remaining pipe. The section a bounding box the extrude and remove material from the lower pipe that does not belong. 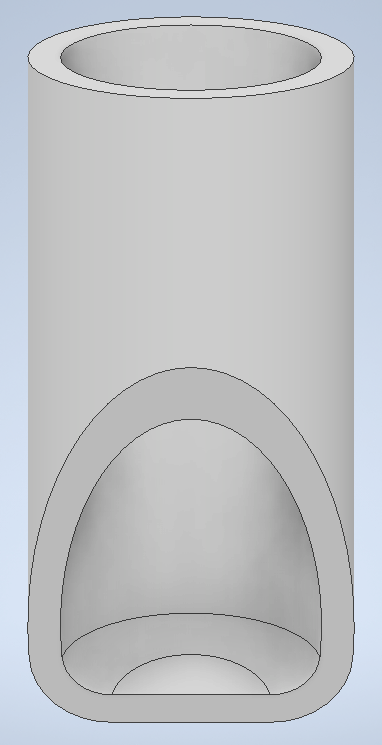 The problem is the last and final step of applying a 15 degree chamfer to top face of the pipe.

I tried applying a chamfer using the tool which was probably the closest result I got but it had a problem. The tool requires either fixed distance on both faces or a fixed distance on one face and an angle from that face. The problem is the width of the top face varies ever so slightly due to the angled cut through the piped. Since the 15 degree angle is relative to the horizontal plane, the depth along the side of the pipe also varies. Below is an endview of the problem.

I also tried creating triangle to cut out the required shape. I initially was going to revolve it, but that does not work as the path it need to follow is not circular. Then I thought about using the sweep tool and selecting the inside edge and tip of the triangle. However the resulting cut from that was not good at all. It was as if the triangle did not remain in its original horizontal position but got twist as it followed the path.

Setting up using the sweep tool

The blue line is the 15 degree from horizontal line from the sketch at the low end. Sweep has some serious issues relative to the desired output. 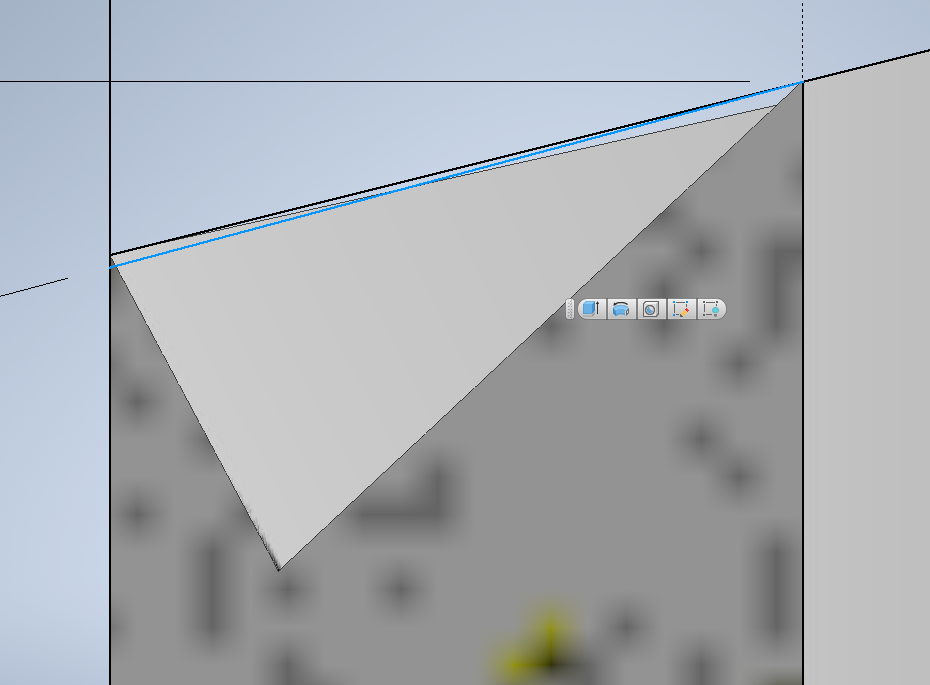 So the last thing I tried was loft. I made 4 sketches, one at each quadrant, and selected closed loop. The result were not good. The resulting shape did not follow the radius of the pipe when viewed on end. I even added a rail of the inside edge which improved things but still had problems.

I just forgot, I also tried a helix (coil) cut, but the path of the helix is not the same as the angled cut through the pipe.

Is there another way of generating this chamfer or removal?

Sorry, no Inventor available here, I use freeware. but I can show one idea:

Cut with a surface which is a blend between 2 lines which both are tilted 15 degrees from the horizontal. The edge of the pipe end is the blending path. Or instead of cutting extrude the blending result and subtract.

Here's the cutting result - only half a turn done, the orange (=selected) surface is the original tilted pipe end for a comparison: 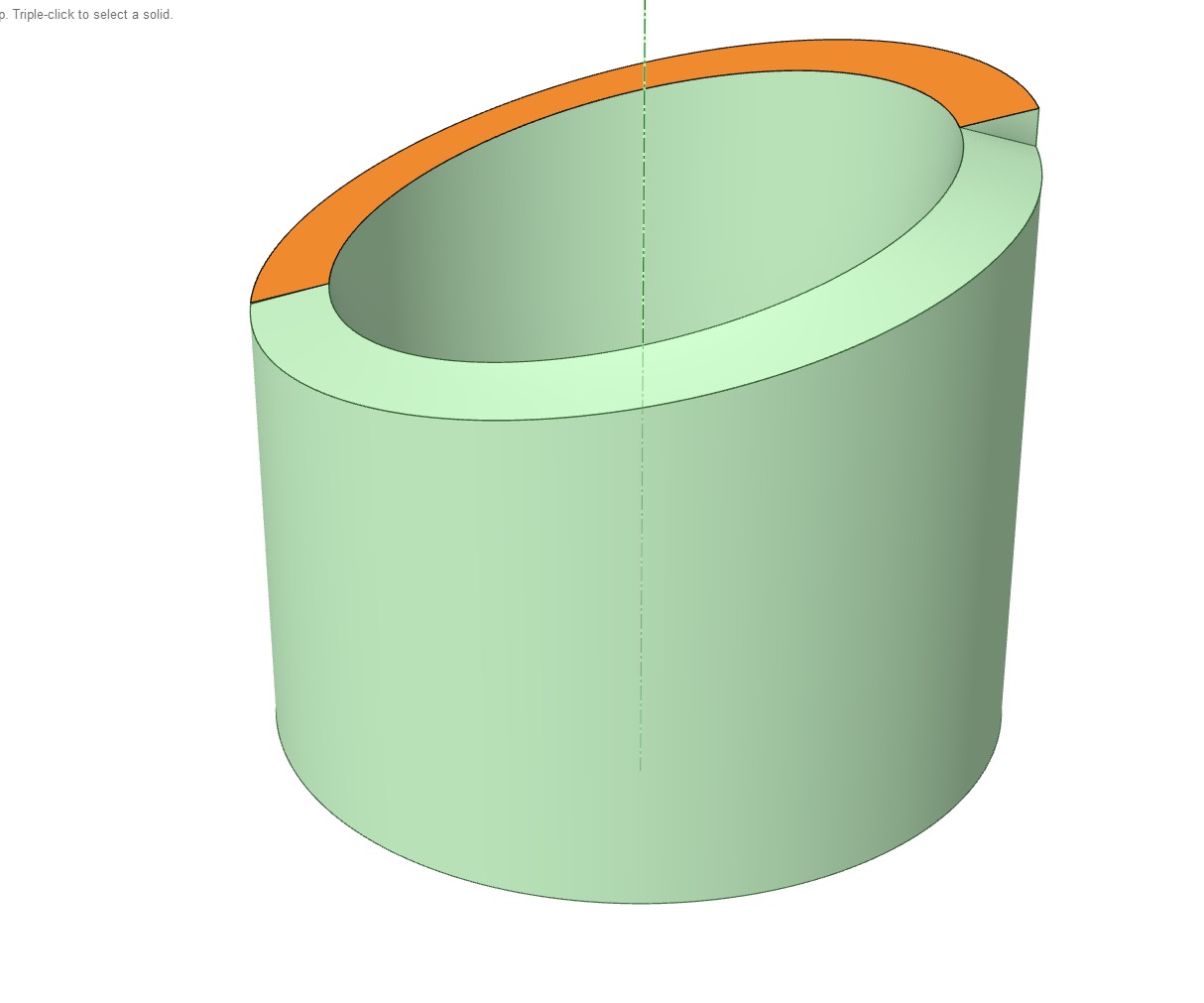 Here's the used blending under construction: 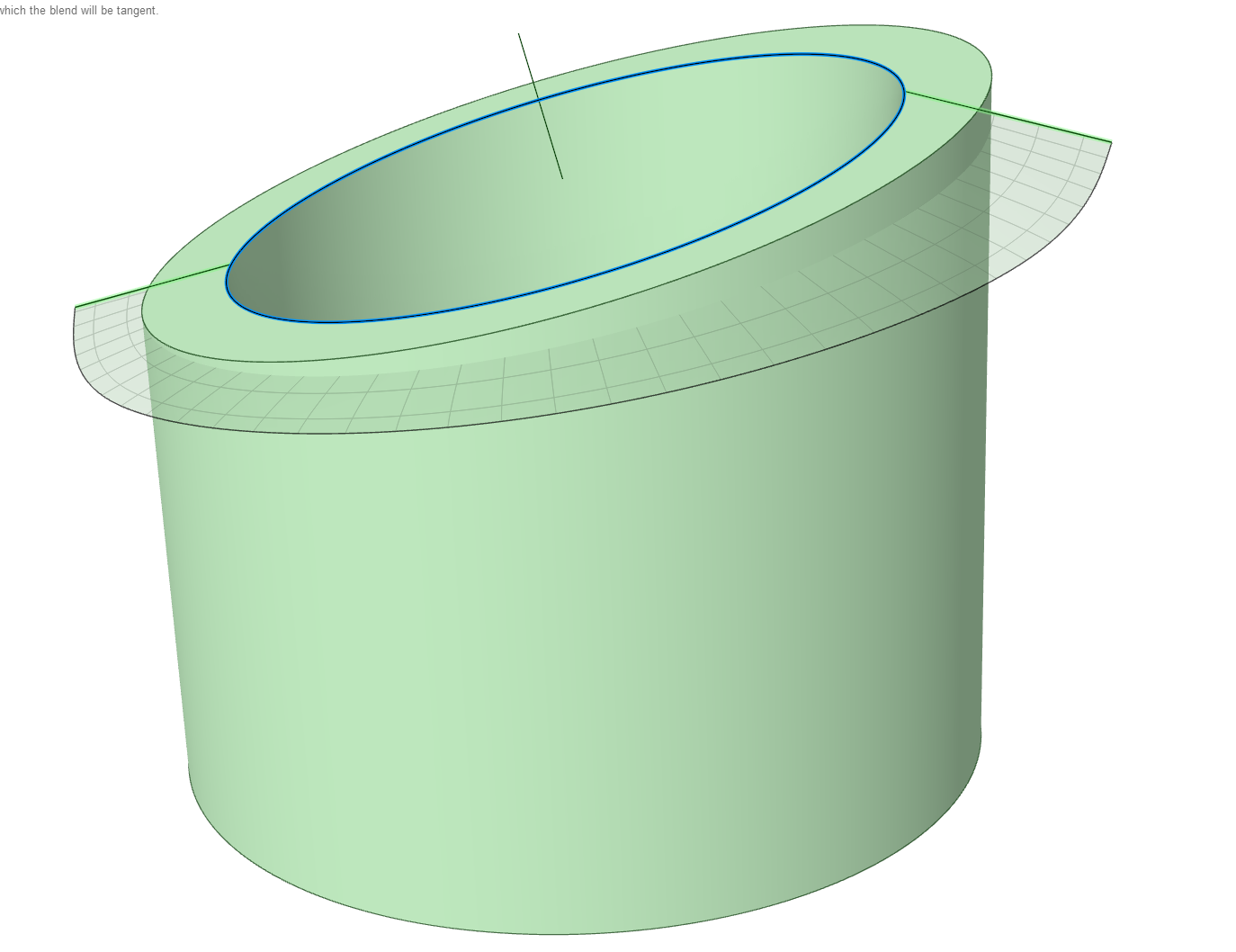 And this is the chamfered pipe end completed: 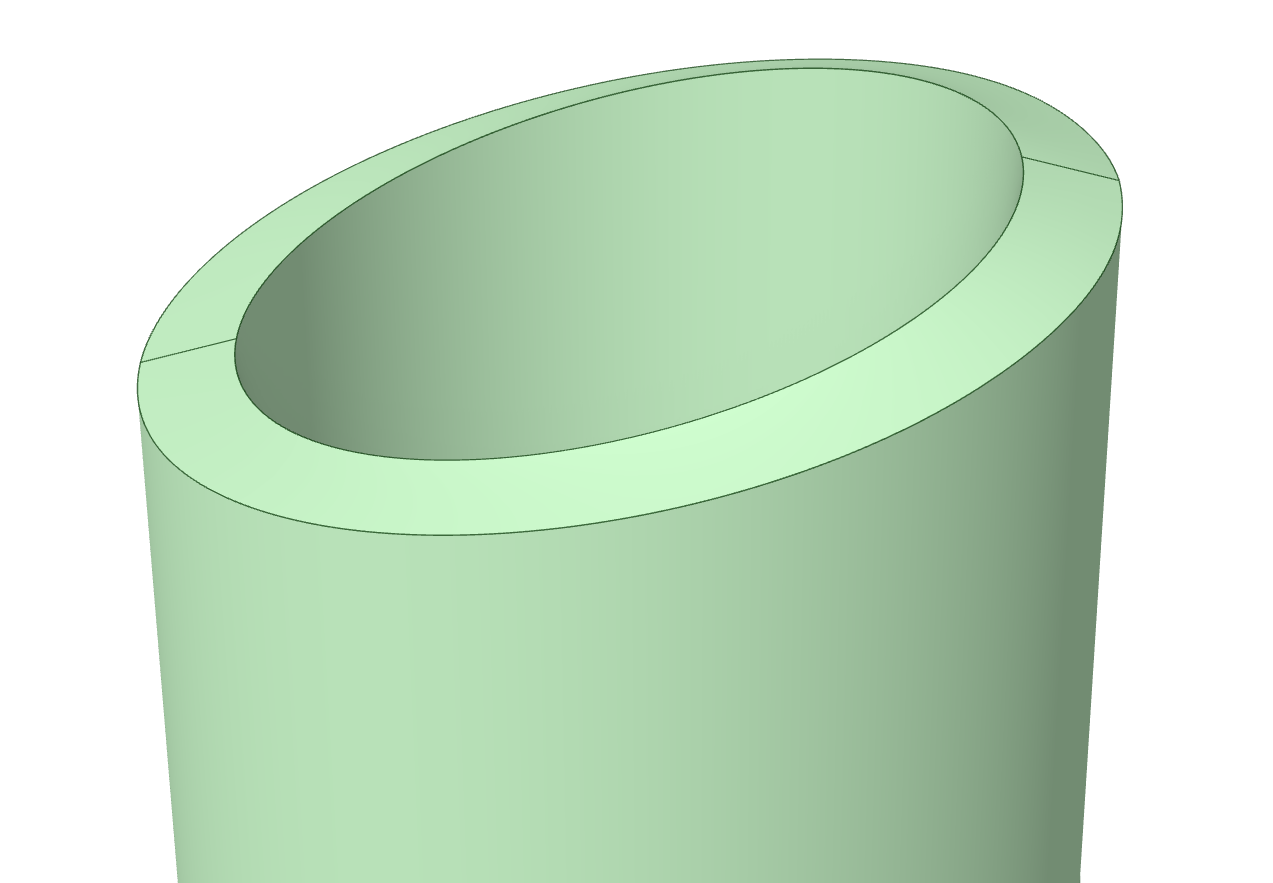 BTW. I have no idea what makes just this (tricky) chamfer good.

ADD after a comment The questioned asked how I guarantee that the chamfering result is 15 degrees tilted from the horizontal everywhere, not only at the rotated lines which are blended to a surface? I must admit I cannot prove it, the result looks right only visually. Worse: Cutting the pipe and measuring revealed that more intermediate lines are needed for less than 1 degree error. To make the error smaller one can insert intermediate lines as many as he likes, but this blending idea doesn't lead to an exact result, not at least in this program.

The starting point is the cross-section of the pipe. I proceed with a half of the pipe, because the result can be mirrored and united.

The red lines show the wanted chamfered surface directions at the opposite edges of the cross-section. They are actually tilted 16 degrees from the horizontal to make a well visible difference to the angle-cut pipe end also in the left.

The blue line is drawn between the points where the red lines cross the outer surface of the pipe.

In the next image the blue line is extruded to a plane: 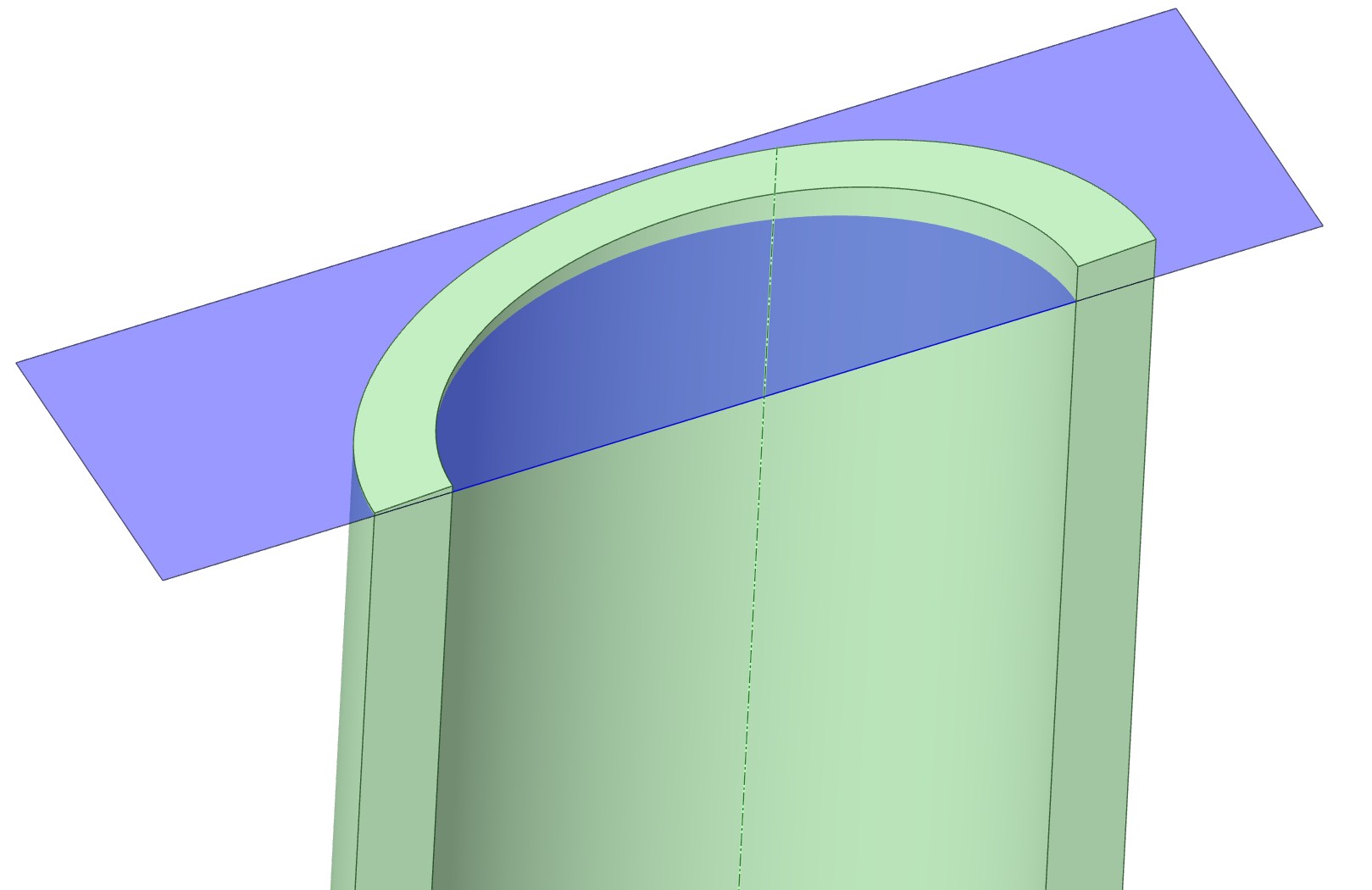 The pipe is split by the blue plane to generate another curve around the pipe. In the next image a blend is made between the new curve on the outer surface of the pipe and the wanted top edge of the pipe: 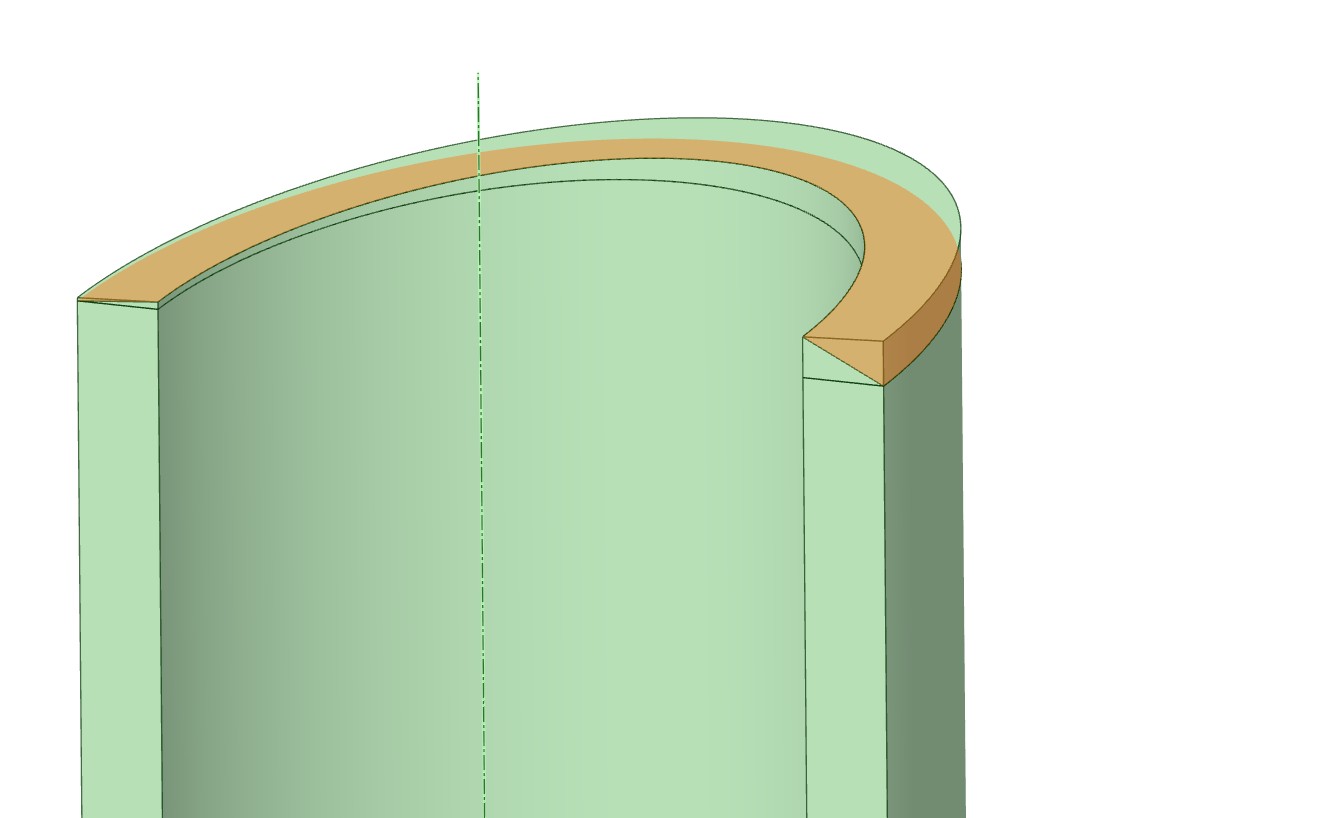 The new surface is orange.

A new splitting is done along the new blended surface and the upper slice is removed: 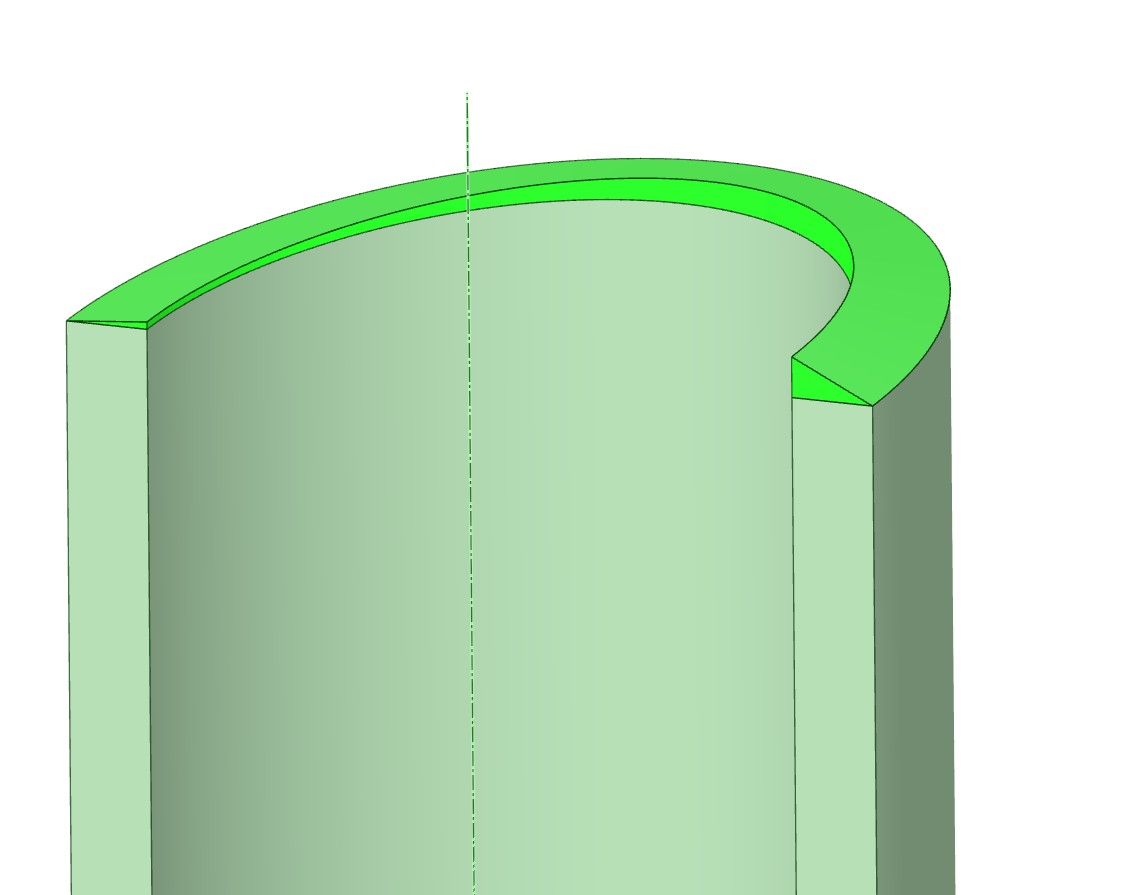 The remaining pieces can be united and the result can be mirrored+united for a full pipe.

But is the new top surface uniformly tilted as wanted? I cannot prove it in math, but making a couple of cross-sections and measuring the angle showed it's the same (=16 degrees from the horizontal):

Chamfer is an angle or distance from a surface. Since your surface varies in angle to the horizontal, you will not get the desired results the way you did it.

Lots of sufficiently fine approximations via sweeps, etc but it seems like people want some exact features, so here's the surface modeling solution. (Sorry no screenshots) Use Thicken/Offset with an Output of Surface to offset the inside of the pipe outward. Distance is likely to be at least 4 mm (can be more than 4 depending on what you want to do). Then use Move Body to shift by (the offset distance from the thicken) * tan(15deg) along the pipe axis. You may have to negate, but thankfully your pipe likely lines up with a lettered axis. Use the Patch feature and select the upper edges of both the pipe interior and this new outer pipe surface. You can do some neat things with the resulting surface patch such as stitching into a solid with surfaces, or Extrude to.

If instead of revolving the solid, you started your pipe as a surface of 36 mm diameter, trimmed it to your 8 mm slant (extruding a line can make a surface to trim to), used thicken by 4 mm, moved the outer surface body, made a couple of patches at top and bottom, and stitched the four into a pipe, the 15 degree "chamfer" surface would already be there prior to cutting the 40 mm feature and filetting.

Not the answer you're looking for? Browse other questions tagged cad technical-drawing drafting drawings autodesk-inventor or ask your own question.