Could a hybrid system of mechanical levers and hydrostatic/hydraulic cylinders be able to lift 200+ kg with the force of an arm?

I don't know much about levers and hydrostatic/hydraulics myself, so I hope I don't make too many misconceptions.

Hypothetically, if you had a 40km+ long indestructible lever on a indestructible fulcrum, you could lift the Eiffel Tower with only your body weight.

With this in mind, the idea is to use these same principles (hydraulics/hydrostatics and levers) in order to increase the distribution of force without needing a 40km lever so an average human being could power this system with the strength of their arms and/or legs.

How much bigger this system and/or the parts of the system would be required to be in order to lift something from 200-300 kg in weight with only the human force of a arm/leg?

Levers and hydraulic cylinders are not typically used for the distribution of force, but are more frequently used to transmit and otherwise modify applied force.

Per your reference to class one levers, the fulcrum is located between the load and the force. This also (and obviously) results in a change in direction of the force with respect to the movement of the load. What cannot be overlooked is the mechanical advantage of a level with the fulcrum not located precisely in the center of the distance between the load and the applied force. Image from linked site. 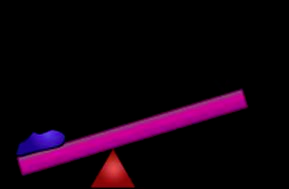 If the load is located one-third of the total way from the fulcrum, the applied force will be doubled at the load, but the travel of the load will be one-half of the applied force travel. This aspect doesn't appear to be a consideration in your question.

The math is a bit more complex than the simple class one lever, however and is left as an exercise to the reader. The image is from the linked site.

In the question, the suggestion to use a larger (diameter) cylinder at the force end is the reverse of the desired objective. 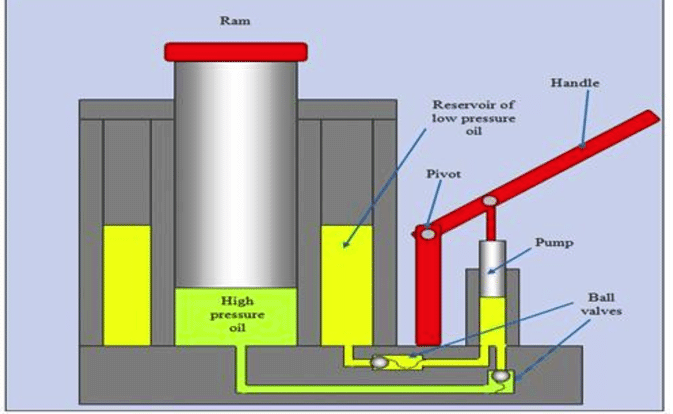 In the above image, the handle is not a class one lever, but it could be if desired or required. For practical purposes, the displayed handle accomplishes the necessary movement of the force cylinder, regardless of lever class.

The load cylinder is the piston of the jack and presents a cross section of greater diameter than the force cylinder. Missing from the image is the necessary return oil flow valve and passages for the jack to function in the real world.

Hydraulic floor jacks can be rated to lift as much as 10,000 pounds / 4500 kilograms using a reasonable length lever as shown in the above image operated by an ordinary human being. The key factor in this consideration is that many pumps of the lever is required to move that weight an appreciable distance.

If a specific and restricted objective is created (distance of travel, mass of load) the parameters of the lever length, force piston diameter and travel can be adjusted appropriately.

In relation to the comment added to my post, a hydraulic pump in an excavator or piece of similar heavy equipment is effectively a quantity of cylinders or means of imparting force to hydraulic fluid. I have seen swashplate pumps with sixteen very small cylinders. One rotation pumps quite a bit of fluid to the destination cylinder/s but also requires substantial energy, typically from an electric motor or petrol engine.

20
How does width and thickness affect the stiffness of steel plate?
7
Calculate effort to raise hinged lever with distributed load
0
How much force can a pole in ground take before falling?
2
Calculating the force and/or torque required to pivot an arm from one end
4
Looking for advice on design of some rollers
4
How does stiffness/rigidity affect the bending moment of a beam
3
What is the torque required to rotate a 450 lb., 35' long cylindrical load 90 degrees?
1
Is there a way of "shortening" a mechanical lever, but keeping its mechanical advantage intact someway?
0
Calculate hydraulic cylinder and pump forces on backhoe