Why does the manual to a 1989 TV almost dedicate a page to the "pin assignment" of the SCART connector?

It is a bit unclear whether this is the "user manual" or the "service manual", the latter which may have only been used service people, but nevertheless, why would it go through the specifics of the SCART connector, naming the purpose of each pin?

Yes, it goes through all the internal of the TV in insane detail, but the SCART connector is not something invented for this TV or by this company (JVC). It's just a standard, external interface.

For me, all these years later, it was interesting to read about, but what purpose could it have for anyone using or repairing the TV? SCART is SCART. It's just a connector, which doesn't change between TVs... right? Or have I misunderstood something? Were there many different "versions" of SCART or something? That seems like it would defeat the purpose of having a standard like that. 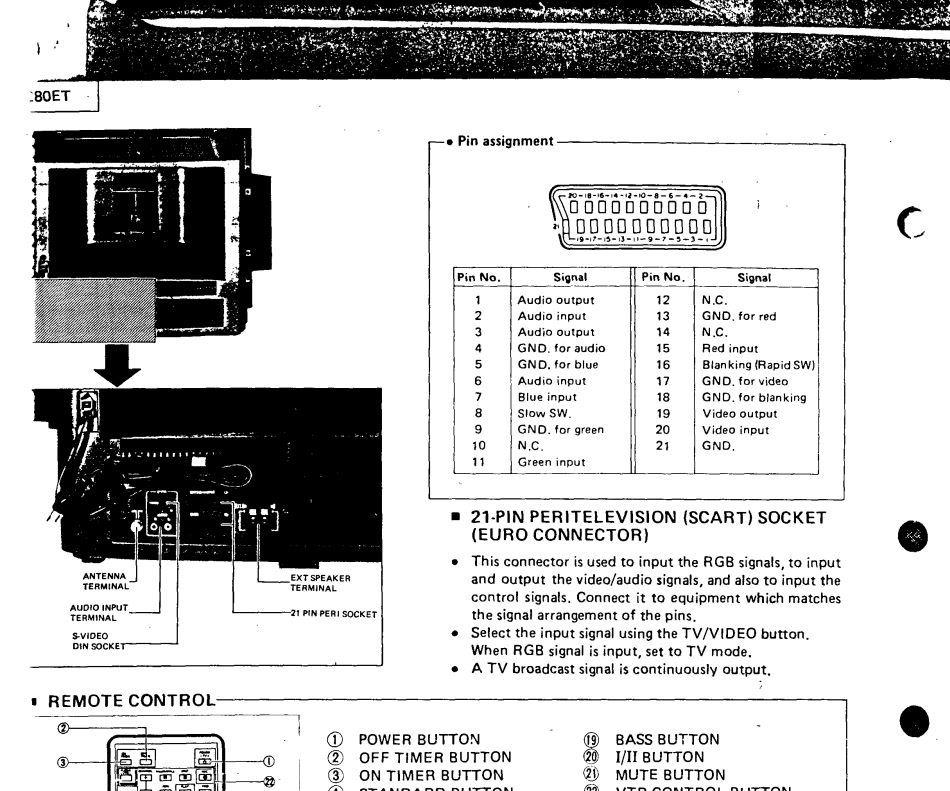 consumer-electronics engineering-history
Share
Improve this question
edited May 29 at 13:31

There was no Internet then. The only source of most of that information was through the manuals and if it wasn't published you could be stuck. Many of us made up adaptors and cables and this information would have been quite useful.

As far as I know, not all devices had all pins connected. The manual gives the minimum information required to establish which SCART features have been implemented.

Also consider that manuals back then were the only source of information outside going back to the shop or to a dedicated repair shop.

So the manuals were made more durable than the one-page paper sheet with a URL on it. My parents stored all the manuals on a bookshelf, along with the Big Dictionary and other common reference books. An extreme example is computer manuals from the days of DOS - solid ringbinders and slip cases.

If a booklet is just stapled paper then it has four A5 sides for each A4 leaf used. So if the information to be published is a multiple of 4x A5 pages you've filled it. But if you go over that by 1 then there are three blank pages that must be in the booklet.

It gets worse if you have a glued-spine, which was quite common for the range of 40-200 pages. A "folio" or fold would be four leaves of A4, giving 16 sides of A5. The paper's there, may as well put something on it because it has to go through the printer and folding/binding.

( I use A4 and A5 as examples. It was just as likely to have A3 paper and A4 sized pages, or similar other standard sizes. )

So the manual is also documenting the current standard implemented in this device at the time.

Not the answer you're looking for? Browse other questions tagged consumer-electronics engineering-history or ask your own question.

1
Why do the "LINE OUT" connectors not seem to output audio, but "HEADPHONE JACK" does?
8
Why do modern phone cameras apparently have three or even more different camera lenses in almost the same spot?
1
Why does the manual to my floor fan tell me to pull out the cord whenever it's not in use?