Why do wooden gate designs recommend a brace under compression instead of tension? 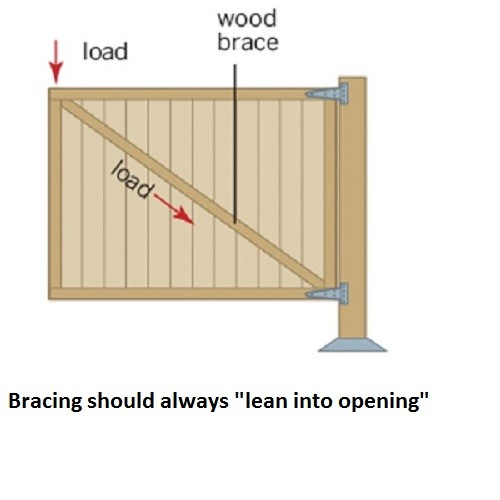 The idea is that the cross brace will distribute load from the top outside corner into the bottom of the hinge bracket. I understand this logic and am sure it works but wouldn't it be preferred to use a tension brace rather than a compression brace in this application?

For example virtually every recommendation for a wire rope support shows the opposite: 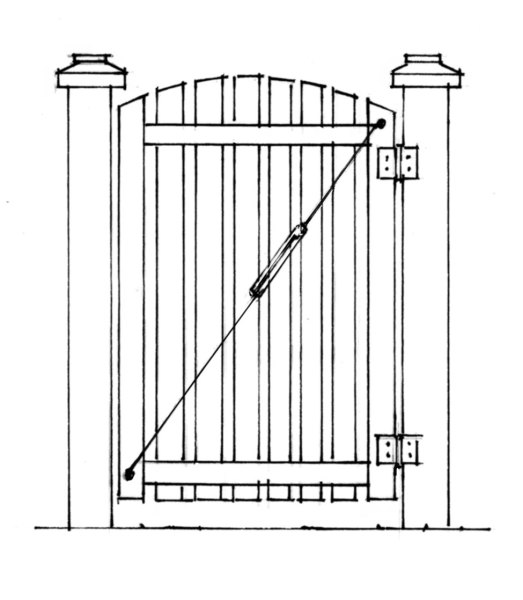 In this case the wire rope supports the far end under tension, but is there a reason a 2x4 couldn't also be used under tension rather than compression? Is the former design more effective for some reason?

I realize that using the 2x4 for tension would require stronger joinery but it's certainly possible to secure it more than well enough to take the load.

Additionally a common theme here seems to be that the load on the gate is too trivial to really care either way but I strongly disagree with that statement. Wooden gates almost never hold up to time, and we aren't talking decades here...most wooden gates will sag within 1-2 years. Wood is certainly a troublesome material but plenty of critical structures have been made from wood with proper engineering and have held up much longer than this. So maybe we should consider complicating things more? It's certainly cheaper and easier to use more complicated joinery/a 99 cent steel bracket and 2x4s than it is to fabricate an all steel gate frame.

Are 2x4s just undersized to support a load like this or is it possible the bracing can make a difference?

The reason is simple: the load applied on the gate is pretty trivial, and the brace (be it a 2x4 or a wire) is mostly added for rigidity.

Indeed, you could put that 2x4 in tension and it would work just as well (since the load is usually trivial, a 2x4 is probably 10x stronger than necessary in both tension and compression). However, as you mentioned, that would require more complex joinery, so... why bother?

Obviously, when using a wire, it must be in tension, so you don't even have the choice. But with a 2x4, you can choose, so be lazy and go with the easier choice.

The frame and the brace in the first gate shown in your question seem to be joined together with simple butt joints, probably with nails to hold them together.

Such joints are strong under compression (which just pushes the ends of the wooden beams together), and also relatively strong under lateral loads if the nails are applied properly to resist the load, but they handle tension loads quite poorly. They might hold under tension for a while, but tend to gradually come apart as the nails are slowly pulled out of the wood. (They also don't handle torque loads too well, which is one reason why you need a diagonal brace in the first place.)

Thus, if you're making a structure like that gate using such joints, you really don't want any of the joints to be primarily under tension. Thus, out of the two possible brace orientations, you should choose the one that puts the brace under compression. Not because the brace itself couldn't handle a tension load, but because the joints at its ends can't.

Of course, you could instead choose to use some other type of joint, like a lap joint of some kind, that is stronger under tension. But that would either complicate the construction or change the way the gate looks (e.g. requiring you to pull the brace out of the box created by the frame members and nail it to the side of the frame instead). If you don't want to do either of those, but just want a simple and easy to build gate that looks like the one in the picture, you need to make sure to put the brace in the right way around. And why wouldn't you, since it's just as easy to build either way?

On the other hand, a wire brace is obviously useless under compression, as the wire will just flex. For such a brace to do anything, it must be placed so that it's held under tension.

If you look closely at the drawing of the gate with the bracing wire in your question, you'll note that the nails or screws used to attach the wire to the gate are orthogonal to the load on them. This forces you to put the wire outside the plane formed by the gate structure. You can't put it in the space between the horizontal beams, because then you'd have to attach it to something like eyelet screws on the top and bottom of the beams, and the tension in the wire would try to pull those screws out of the wood. And eventually succeed.

You could do something like drilling diagonal holes through the horizontal beams for the wire to pass through, so that you could then attach it to the other side somehow. Or just put a long bolt with an eyelet through the hole with a nut and a washer on the other side. (You'd probably need to cut a wedge or counterbore a hole in the beam there to allow the washer to lie flat against the wood surface.) But again, that would significantly complicate what's supposed to be a really simple construction.

Wood expands when exposed to moist conditions. For the first case, the elongation of the diagonal will be offset by the compressive stress, resulting in a smaller geometry change.

For the second case, the elongation of the diagonal will be much larger, because the change in length is the addition of tensile stress and thermal effect (tension), potentially causing jamming at the lower corner to occur.

So, in many applications, a K-brace, or X-brace, is used to better control the deformations.

Just make a model and see how that wire will behave in compression.

Also you would need different joints for the wood to work in tension - can be done though and some gates have through joints that are pinned.

My preference for the cable version is based on the following, FWIW:

And most importantly... 3) It allows for adjustability when there are changes to either side post or the frame of the gate itself.

I have a privacy fence gate on the side of my house that has an 8' span using a cable support and after 35 years it still closes perfectly thanks to a handful of adjustments to the tension cable over the decades. YMMV.

The wood under compression is easier on the fasteners. Screws, nails, whatever. Think about the failure modes. How much weight or how many Newton Metres will it take each way before failing?

Also it is built flat, not like a drawbridge having a frame attached. Also not that large. If it was a bridge having to meet in the middle and weight was an issue, then yes, tension, but properly anchored, and not timber.

13
How does pressure treatment affect the mechanical properties of lumber?
8
Vertical wave action on bridge
0
Do concealed door closers exacerbate wear on a door's hinges?
1
Is using a 4x4 bolted to the face of 2x12 enough?
3
How do you account for buckling in a brick and mortar structure?
1
How many support beams/rods needed for a firewood storage cabinet