Why are two wires used in railway overhead equipment?

While watching the train videos, I came across these overhead wires. After searching on the internet, I found that both catenary and contact wires carry the same voltage and are connected by vertical wires called "droppers" at intermediate points (please refer to image 1 from this video. In the first image, it looks like the upper wire is supporting the lower wire, but in the second image from this video they look different. Why are two wires used if one wire is sufficient to carry current? 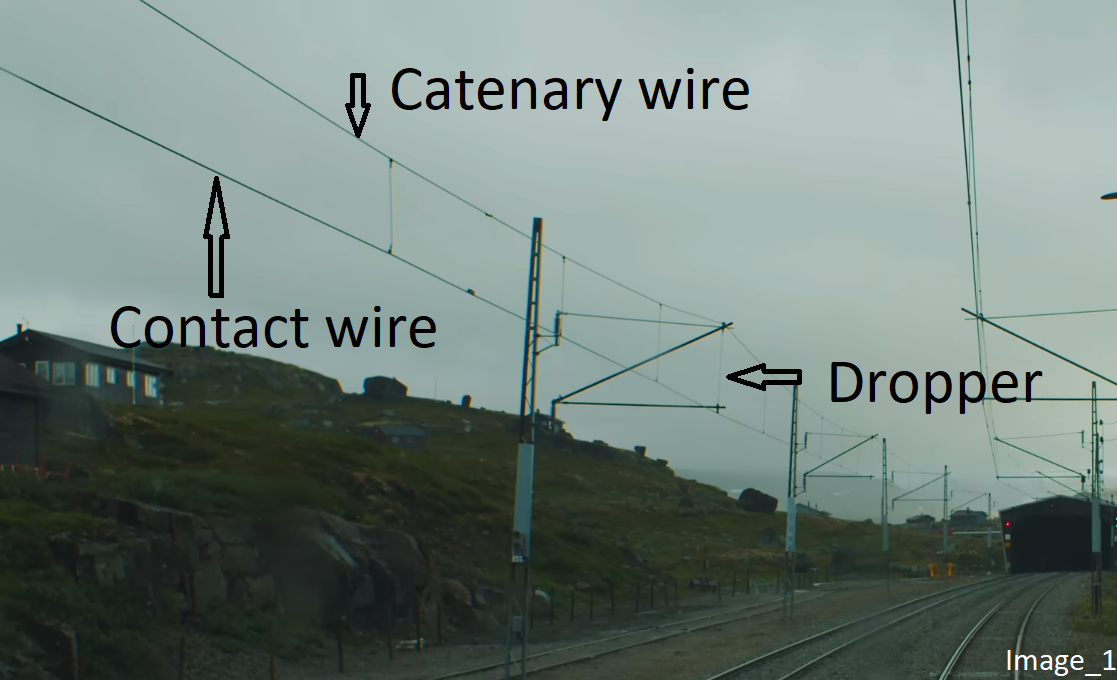 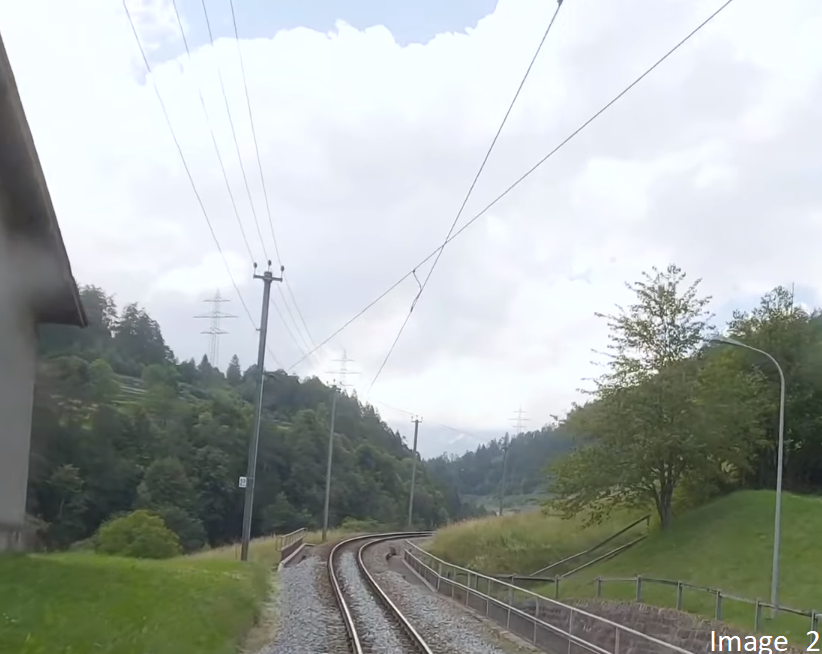 Exaggerated considerably. Trolley wire is kept under 500-2000kg of tension.

The problem is that a catenary curve is only smooth up to the anchor point, then it makes a fairly abrupt turn at the apex. From the pole or pantograph's perspective, it is actually this flipped over - because of the considerable up-force of the pole or pan. So the pan sees it as an inverse catenary, being dragged downward as it nears the anchor.

The zone of flex; the pole/pan is riding the top of this.

So the pole/pan sees a nasty "knot" at each anchor where it's being forced downward to meet the anchor. Deflection force is abrupt and at maximum right before the anchor and minimum right after the anchor, so it's quite a jolt of vertical acceleration and jerk. I tried to illustrate just how hard the kink can be right near the anchor, but it doesn't show that well. But I've seen wire permanently bent this way on either side of an anchor.

As you go faster, you increase wear and tear on the hardware, and increase wire breaks. Wire breaks are a nightmare to operations, as you might imagine. And mind you, arc fault detection is relatively new. The only thing that keeps the pantograph from "ski jumping" clear off the wire is its spring up-force. But that only works up to a certain speed.

To go faster, we must get rid of that kink at the anchors. It would be ideal if the wire just hung flat. So, obviously, the catenary style of wiring.

I wasn't going to post an "entirely obvious" drawing of catenary overhead, but now I have a reason.

The catenary wire is galvanized steel. The droppers are typically steel (there are plenty). The wire clamps are typically bronze. The contact wire is copper.

Systems of this design are good for as fast as 200 kph/125 mph, depending on how well it's maintained. And it is compatible with trolley poles rather than pantographs - in fact, the North American "interurban railway" network of high speed lines was fully built out before pantographs entered the scene. The Chicago North Shore Line operated 100 mph/160 kph (when ICC inspectors weren't around) using poles on catenary.

But you can see now, when a pole or pan passes along the wire, it still "hops up" but in a different manner altogether.

The pantograph or pole's uplist force creates a local rise in the wire as it passes, but it's very consistent; no stress hotspots. Note the droppers are made to rise up in a controlled way.

The next evolution of speed requires abandoning the trolley pole (at least for regular trains). Up until this point, wire tension was set as a compromise to work well in the summer without deforming or breaking the wire in the winter. In order to go faster than this, we really need "winter tension" all year, and that means the line must be actively tensioned with counterweights. (so in the winter, the shrinking metal lifts the counterweights instead of breaking). This requires interrupted segments of trolley wire, which preclude use of trolley poles for any but maintenance equipment (which could stop and move the pole to the other wire).

So why no catenary in photo 2? Because you're in "the twisty bits" there. Trains can't go all that fast, so catenary is not required.

What about current? Why is the catenary wire energized?

Plain and simple: because NOT energizing it would be a pain in the @$$, and make repairing the wire very dangerous.

Wire line work (on sub-5000 volt lines) is done with the trolley energized, from car roofs or platforms made of insulating material. Workers on the platform are simply energized at trolley voltage, and that is fine. Ground is lethal to them, and nothing may ever be passed up except via an insulated rope. Trailing a wire down is folly. As such, these systems take care that everything near the trolley wire is on the "energized" side of the insulator, or attached to a wood pole.

Does the catenary wire add to current ampacity? Sure, but it's just considered a bonus. Current is augmented by intentional feeder wire run parallel to the track, with bridging over to the trolley wire made every few poles depending on the voltage and draw. (due to the numerous droppers, tying to the catenary wire will suffice).

Indeed, image 2 shows a feeder wire - the solitary wire up on the pole. I don't know if there is a ground feeder wire, it would be on the ground obviously, but heavy section welded rail doesn't need it so much with advanced signal systems that allow both rails to be grounded and continuous. That is a lot of steel, and it has to be there anyway.

Typically, feeder wire is fat AA-1350 aluminum such as 1750 ACSR or larger. (ACSR has a cluster of steel wires in the center for carrying capacity). Sorry, that is 1750 kcmil (thousand circular mil). By contrast the contact wire is typically 4/0 (212 kcmil) or 250 or 300 kcmil and pure electrical copper.

If I were king, and I'm not, the contact wire would be steel and the catenary wire would be ACSR (steel wires about the size of the current catenary wire) and would serve as feeder. The many droppers would assure adequate current. Copper gone; copper theft gone.

What about keeping the trolley wire centered?

Oh, you don't want that. First, a trolley pole doesn't care. Second, if you studiously keep the trolley wire dead center on track, your pantographs will get a deep groove in the middle. You want the wire to continuously skiff back and forth across the contact surface of the pantograph. This also makes alignment a whole lot easier, because you don't have to lol. Now if poles are in play, curves need to have typically a tilted catenary to keep the wire path relatively smooth. If you are pantograph only, no worries, just let it "polygon".

What else about the second photo?

I mentioned the contact wire, feeder and distribution wire - just by happenstance, way off in the distance is the national utility's power transmission lines up on the usual pylons. That's probably where the distribution wire gets its power.

The 5th wire in play is crossing at an angle, and that is just to physically hold the contact wire in the air. It is crossing from a pole on the outside of the curve to a pole on the inside of the curve, which judging by the lump just barely visible, looks like it has a trolley wire hanger there. This is one of several ways of supporting trolley wires in curves. I mean you could do the whole shebang with wires simply zig-zagging between alternate poles; however in this case they are dancing around a bridge and creek at an oblique angle.

You say "How is that cross-wire supporting the contact wire? The hanger wire between them has gone slack." Yes, because the contact wire is being pushed up by the train's pantograph.

The faster the train, the harder it is to keep good contact; when that is lost, there will be arcing, which reduces the life of the pantograph.

A wire hanged at two points sags (it forms a "catenary curve"). The pantograph can only handle a certain sag before losing contact and arcing.

One can tension the wire in order to decrease the sag, but the wire has limited mechanical properties (it is made of copper that worsens the problem).

What else can we do? Use a second wire with better mechanical properties (steel) above the first one, allow it to sag however it wants at some moderate tension and use droppers to adjust the contact wire as straight as possible.

Why the second wire is energized?

There is a pretty much non-trivial part of this construct: the isolators.

It is hard to create an isolator that is at the same time mechanically strong, electrically strong (25kV are no joke) and resistant to aging.

The result: they are somewhat expensive, they have somewhat limited lifespan and they are heavy.

They are also a point of failure. A single of them broken = power off, traffic stop, repair team dispatched.

If you put them at every dropper, you will have 5x ... 10x of them with the corresponding increase of power loss, installation cost, weight (stronger poles and catenary) and maintenance downtime.

Engineering conclusion: use the bare minimum of them, 2 per pole.

Bonus point: the catenary wire carries some current (probably not much, because it is steel and the contact wire is copper).

The catenary being energized also prevents (to an extent, but important in some places) sabotages and stealing.

In regard to the second picture: It is still the catenary supporting the contact wire, but in a simpler setup for probably lower speeds and lower overall requirements. The catenary alternates between the left and right poles (at turns the poles are only at the outer side of the turn), supplying points to hang the contact wire over the rails.

This second setup is made only with simple, straight poles and uses only a single isolator per pole.

6
Why are turbo compound engines not more widely used?
0
Safely Measuring Voltage from Solar Panels in an Experimental Research Field
3
Why are both conductors in a High Voltage Direct Curent powerline isolated from ground?
1
Why do we have two different Elastic Modulus in Tension and Torsion?
0
Equations of condition: why are two moment equations around a hinge dependent?