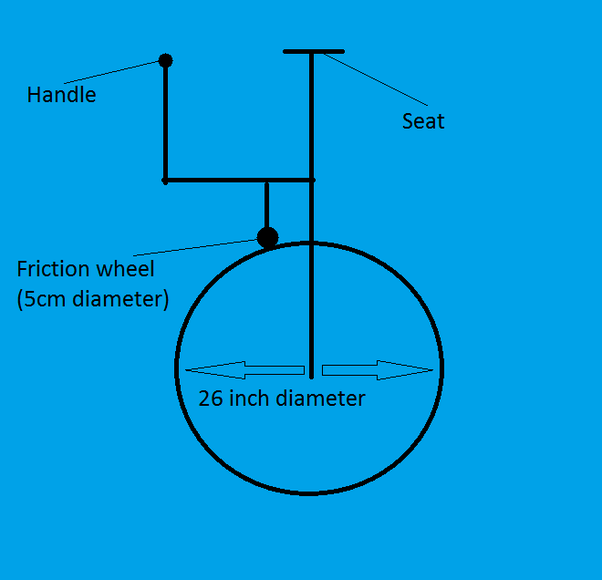 My question is how much torque should the friction wheel drive motor have considering the total mass of unicycle including rider is 100kg?

I'd like the unicycle to go at speeds of up to 6 miles per hour, and climb up hill a slope of 45 degrees.

The unicycle would not be self balancing, the rider would have to balance it themselves by using throttle and brake.

The rider would be tilting themselves forward at an angle of 45 degrees.

The speed is not really important, how fast it reaches that speed (acceleration) is relevant.

The vertical component of force, Fv

Let's assume 10%friction and loss, the torque of the monocycle wheel (big wheel) is

the rider has to tilt his body same as the angle of slope to make equilbrium. but this doesn't have any effect on the torque.

however if the rider want to accelerate with an acceleration of $a , $ he needs to bend an addition angle of $ arctan(a/g) $ with g, being gravity acceleration and the friction wheel torque has to be increase by the same ratio.

also as to the slope of 45 degrees just plug in $mgsin(45)$ in the above calculations.