The lower plastic limit theorem is stated in Wikipedia as follows:

If an equilibrium distribution of stress can be found which balances the applied load and nowhere violates the yield criterion, the body (or bodies) will not fail, or will be just at the point of failure.

I'm particularly interested in this theorem in the context of reinforced concrete.

On this website, design of concrete corbel is described using "Strut and tie" method, which applies the lower plastic limit theorem. 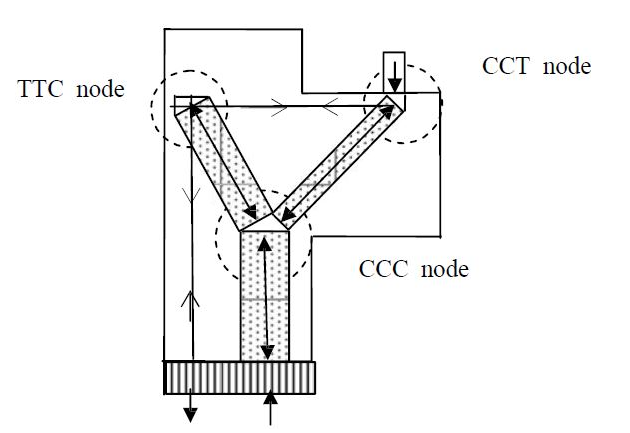 So, at the heart of my question is this: Do we require previous knowledge about the load paths through the structure before we can apply the lower plastic limit theorem?

The theorem as stated on Wikipedia states that if an equilibrium distribution of stress can be found which balances the external loads which will not fail, the structure will not fail.

So if we first just come up with a placement of reinforcing bars, with concrete assumed to be balancing this "truss", and the rebar does not yield, nor the concrete compressive stress is not exceeded, will our structure hold (not taking into account that it can be unoptimal)?

Considering the picture above: we have placed a bar close to the top and assumed that the locations where we have the compression struts (concrete in compression) are locations where the concrete will and can actually be in compression. Would any such arrangement be correct, assuming the "truss" will not fail? Or do we need some knowledge beforehand that such arrangement is actually close to the real distribution of stresses in the structure?

To answer your question: yes, absolutely any reinforcement scheme which satisfies the criterion will withstand the loading without failing.

Emphasis on "without failing". A poorly thought-out reinforcement layout may resist the applied load, but it will do so poorly. It won't fail according to ULS (ultimate limit state), but it won't get anywhere near satisfying the SLS (serviceability limit state).

So it won't collapse, but it will have cracks a mile wide.

Thankfully, coming up with reasonable tie-and-strut layouts is pretty straightforward, so the reinforcement you adopt will likely be somewhat near optimum.

Ultimately the answer boils down to wether the geometry of your structure combined with particular loading will confirm to the imposed behavior by preplacing the rebars assuming the truss stress pathway or not.

There are cases where placing extra reinforcement at an incorrect location can lead to imparing stifness and stress concentration, and even failure in long term, especially in cyclical loading and unloading situations.