Routing the flow from an axial "box" fan

I have a project where I need to generate a certain flow rate to levitate a ping pong ball using the Bernoulli principle. From some rough calculations, I found that it would take about 30 CFM through a 2" diameter hole to lift the ball. 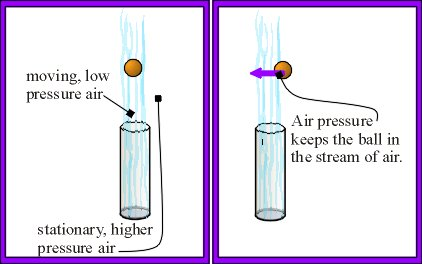 The only fan I have is a big box fan (an axial fan) that can provide 2000 CFM. I tried taping a trash bag to my box fan and routing the flow to a small hole, but there was almost no flow through the hole. I think that I basically created an orifice plate, which requires a pressure difference to generate flow. Axial fans have notoriously low pressure ratios, so it's no surprise that this didn't work.

Is there any way that I could use my box fan to do what I want to do? Could I use something like a large converging nozzle on the end of my fan?

What if I wanted to supply multiple pipes with airflow to lift multiple ping pong balls? Could I use an axial fan? Or would something like a centrifugal fan be better?

Converging ducts have been constructed for years.

Often an exercise to work out the angle needed for lowest losses, about 6 degrees iirc.

Aslo an exercise to calculate the shortest joint lines especially for welders.

4
Perfectly aerodynamic kitchen range hood
0
Calculating Pipe Leak Flow Rate
3
Fan performance curve
0
How to select a fan blade for my application (strong, focused breeze)
1
Why does the manual to my floor fan tell me to pull out the cord whenever it's not in use?
0
Increasing airflow of fan