Value of the Reynolds Number in constant velocity flows

Consider a fluid flowing such that all the particles have same velocity, what will be the Reynolds Number for such a flow?

We know that Reynolds number,

So what actually is the Reynolds number of a flow with constant velocity?

Let's start with a quick review of the term - "viscosity".

The viscosity of a fluid is a measure of its resistance to deformation at a given rate, it quantifies/characterizes the internal frictional force between adjacent layers of fluid that are in relative motion. In general, viscosity depends on a fluid's state, such as its temperature, pressure, and rate of deformation (which is negligible for Newtonian Fluids). Zero viscosity (no resistance to shear stress) is observed only at very low temperatures in superfluids; or a monatomic ideal gas, in which the internal energy of molecules is negligible. (Ref)

The sketch and formulation below may help you to gain a better understanding of the force terms, on which Renolds Number is derived/based upon. 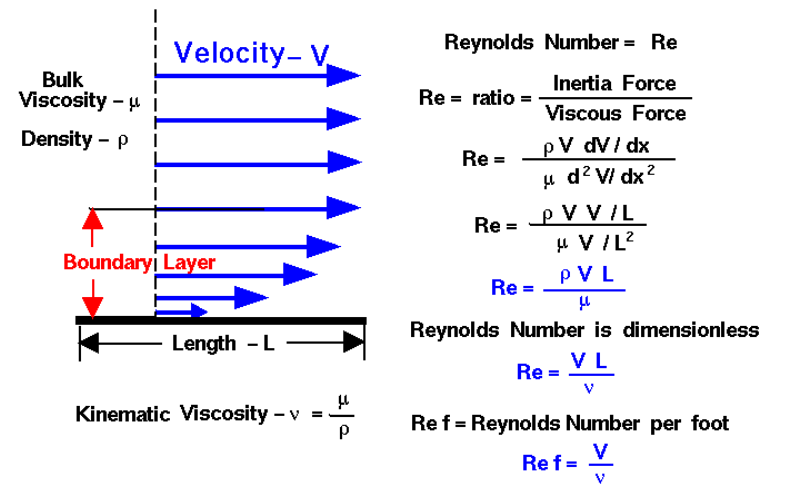 From all of the above, we can draw the conclusion that Renolds Number will always be a real number, or "zero" if $V = 0$.

6
Is inviscid flow necessarily turbulent?
13
How to determine the characteristic length in reynolds number calculations in general?
2
Mathematical connection between systems of particles and rigid bodies
4
Finding the velocity of water flowing through a gravel filled pipe
4
Why Nusselt number for laminar flow in a pipe is independent of reynolds number
0
Boundary layer thickness decreases as fluid velocity increases, so why is the boundary layer thicker in the turbulent region for higher velocities?
0
Is this value of critical Reynolds number also valid for ducts?
0
A fluid element taken in the velocity boundary layer region