How to select the right power supply for a stepper motor?

When choosing a power supply for a stepper motor, e.g. this one below:

The Stepper Driver I will be using is:

So would my power supply need a output Current of 4.0A?

And a Output Voltage of 24-50VDC, how is the performance of the motor affected if I use 24VDC vs 50VDC Power Supply?

Thank you in advance!

in both cases the ranges of input voltage and incput current are specified and the output current is usually specified by the user.

the following is from the dma 542 datasheet.

The input voltage that you need to connect to the stepper driver is anything between 20 and 50 VDC (36 is the typical Voltage). It shouldn't matter what is the recommended voltage of the motor.

You'd only need to flip the right SW switches (see below) to get a peak output current (to the motor) of 4.2 Amps. 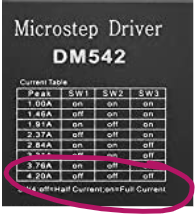 If you have a desktop lab supply connected to the driver, you should be able to see how much current is being drawn from the driver. I'd expect that if you set the voltage of the power supply to 24V you'd get approximately double the current being drawn from the driver compared to if you had set 48V. However, I'd expect that in both cases the stepper motor should perform exactly the same.

For static and low-speed applications, it doesn't matter. If you need full torque at speed, it's nice to have a datasheet that provides a graph like this: 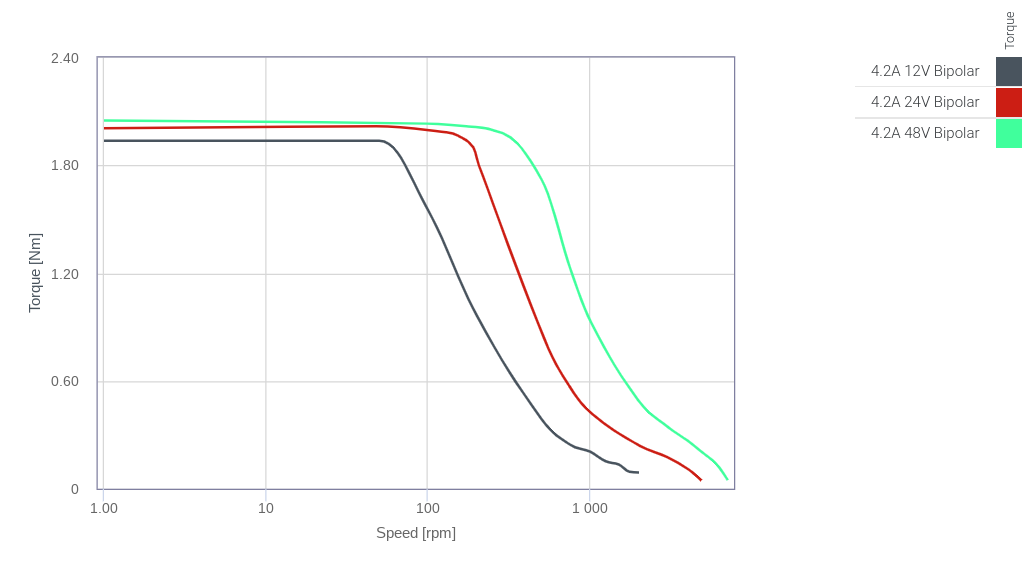 Roughly speaking, the effect of increasing the supply voltage from 24V to 48V would roughly double the RPM which is the "corner" on that graph.

The main reason is winding inductance. Magnetization is controlled by current, and rate-of-change of current is limited by max voltage. At the high end of the speed range, the lower supply voltage cannot increase the current fast enough.

A very crude approximation of max rate needed is a triangular current profile (in reality the profile will be sinusoidal for effective high speed motion, but let's neglect it here for simplicity). This triangular profile has the current swinging from +4A to -4A and back to +4A, at each step = 8A swing per half step = 16A/step.

In real-world applications, at higher speeds it's also good to have excess torque capacity beyond what's "used" by the load, to let the system accelerate/decelerate and cope with resonances. Driver details would play a role there.