Would this be the best permanent magnet design for vertical rod?

I'm trying to design and build a small vertical wind turbine that is held in place by permanent magnets, i.e. the rod with the blades on is held using magnets and gravity and allows the rod (that the blades are attached to) to spin with as little friction and as little magnetic resistance as possible.

I'm going to build this with a 3d printer, and I'm just starting out and wondered if there was a design that someone knows of or could think of that would allow such a rod to be held in place (given that wind will be pushing against it) but allow it to spin at the same time.

My initial idea is to have a disc magnet on the rod (rod is shown as the vertical black line) - where the rod goes through the middle of this disc magnet (shown in red in the diagram below) and have its outer circumference poled differently from it's inner circumference. Then have a disc magnet above and below this disc (shown in blue) where the same pole is facing the disc around the rod, but the inner diameter of these two discs are larger than the diameter of the rod and is not touching the rod. Each of these will oppose the disc attached to the rod thereby holding it in place but allowing it to still spin.

See below for a very basic diagram of my initial design: 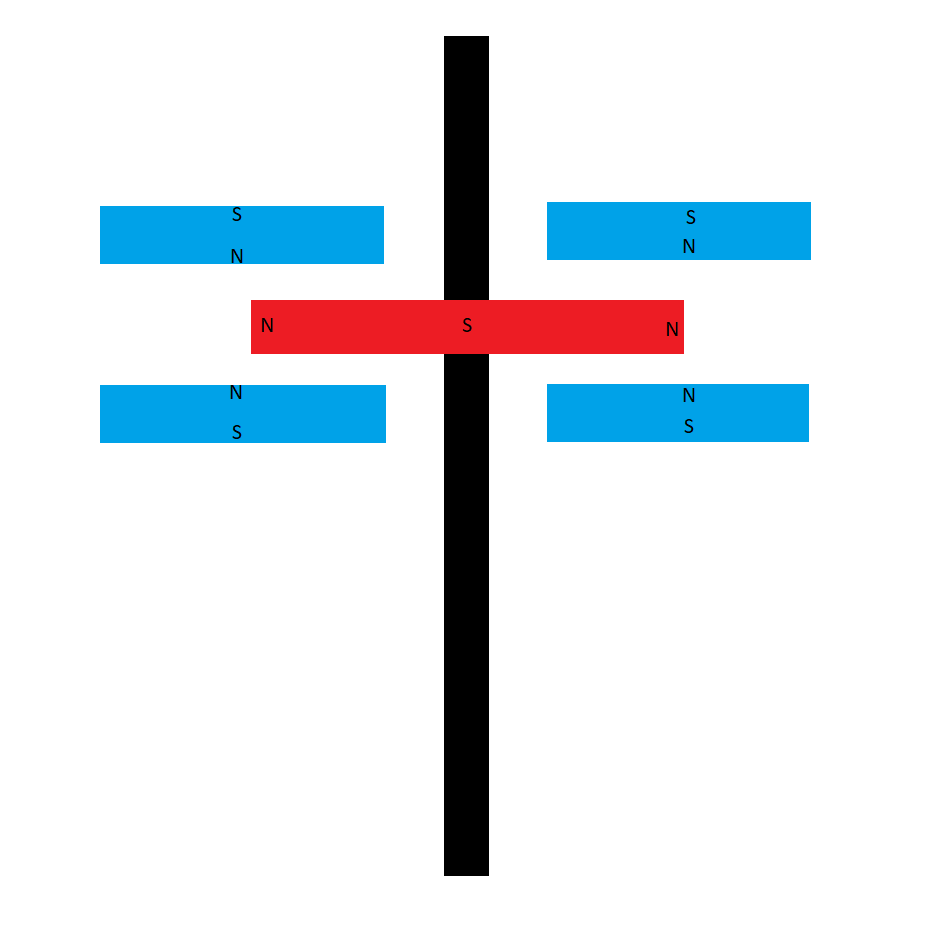 The black bar in the middle is the rod. And for clarity, the south pole on the red disc is at the innermost part of the disc magnet and the outer edge is all north polarity.

If anyone can think of a better design, I'm open to suggestions or modifications to this to make it more stable or reduce resistance.

Edit: The size of the wind turbine blades will likely be no longer than 250mm in length and a width of only 70-80mm each blade so this is NOT a large turbine. The aim is to achieve (if possible) about 10 watts at 5mph wind speed.

What you ask for is prihibited by the Earnshaw's theorem

You must use other methods to provide stability. Few extreme cases exist where magnets can hold an item, such as diamagnetism, superconductivity, levitron toy. Also few examples of magnetic bearing, where either stability is achieved through rapid rotation like in levitron, or through active sensing and acting.

None will work for a magnetic bearing for a cheap device that can also stop, and stay unpowered for days.

Not the answer you're looking for? Browse other questions tagged magnets or ask your own question.

9
What causes friction in magnetic bearings?
3
How is the attractive force between two magnets changed when they are separated by non-metalic solids?
12
Can a magnetic lock be negated or overcome by a stronger electromagnet?
4
Magnetic decoupling torque
1
Could a magnetic audio tape recorder/player be made using a vibrating permanent magnet?
0
Magnetic Entrapped Storage at 0 gravity
2
Generating practical power without an iron core, but with high RPM
1
Can you use an electromagnet to break the connection of a permanent magnet?
4
Can a Foucault's current brake be used on the rails themselves to brake trains?