Consider two slabs - Slab A and Slab B, insulated on "latereal" faces as shown, initially at the same temperature, and having identical dimensions. The slabs at t= 0 are brought in contact with two heat reservoirs (on left and right) at temperatures $T_1$ and $T_2$. Slabs have the same thermal conductivity but different specific heats, with $c_A > c_B$

Since specific heat of A > that of B I argue that the temperature profiles at any instant of time t, would be as follows: 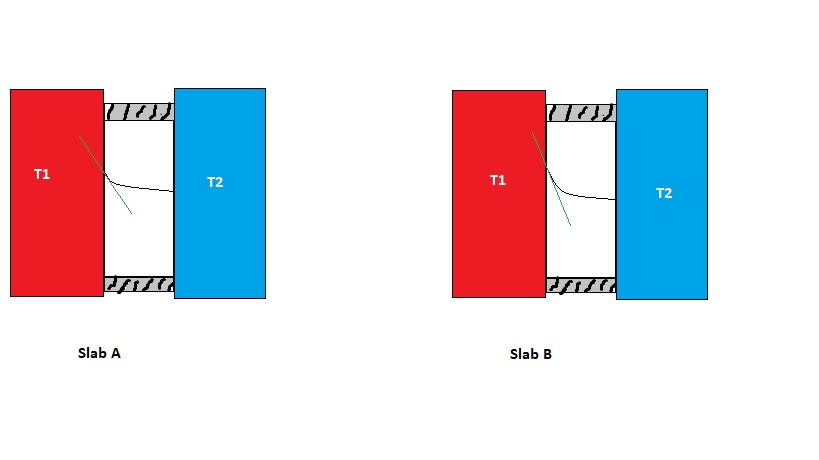 i.e. since $c_A > c_B$ A will have a hard time raising it's temperature than B. As a result the temperature gradients in A will be smaller (in magnitude) than in the case of B. This would mean that the heat transferring to A from the left reservoir in any time dt is smaller in A than in B. Furthermore, the rate of heat transfer in intermediate layers will also be lower in A than B. I've often read that a higher specific heat restricts thermal diffusion, could this be one way of explaining it why?

You are right. What you are referring to maybe the property called Thermal diffusivity, $\alpha$

However in your example as soon as slab A reaches the T2, a bit after slab B, on the right side they both transfer heat at the same rate because they have the same thermal conductivity.

Not the answer you're looking for? Browse other questions tagged mechanical-engineering heat-transfer thermal-conduction or ask your own question.

11
Comparing the performance of glass and granite in a heat storage application
2
Why use different specific heat capacities in the energy equations for incompressible and compressible fluid flow?
2
Thermal Conductivity of a Layered Composite
3
estimating the surface area of a steam coil immersed in a tank
3
Can a chain of nested thermal heat pumps be used to to gain thermal energy out of the environment?
1
Analytical solution of thermal stress in a bi-metallic cylinder
0
Thermal Conductivity and Energy gain