Is it better to charge my electric car on windy days?

There are various dashboards (for example, here) that show the current energy generation mix and the overall CO2 emissions (gCO2/kWh).

In the UK renewables can make up a large proportion of the total, but it is never 100% - there is always some fossil fuel generation (from natural gas and occasionally coal).

Naively, I feel I should charge my electric car when the CO2 emissions are low (typically on days when wind generation makes up a greater proportion of the total energy mix).

And a recent article in the New Scientist (Smart Scheduling for Big Computing Tasks Cuts Emissions Up to a Third) also concluded that CO2 emissions are lower if you plug in when renewable sources account for a greater proportion of the energy mix.

On the other hand, plugging my car into the grid presumably increases the load, which will be supplied by non-renewable generation (since renewables don't yet cover 100% of demand).

So, it seems to me that maybe it's worth avoiding times when coal-fired power stations contribute to the mix, but otherwise it perhaps doesn't matter whether gas supplies 10% or 90% of the total: the power needed to charge my car will always come from burning more gas.

The question: can I reduce my CO2 emissions by charging the car when renewable energy generation makes up a larger proportion of the mix? (Knowing that renewables never contribute 100% and the shortfall is covered by burning fossil fuels).

tl;dr: Very windy days might be worse but the data isn't great. Charging in the late afternoon is your best bet to reduce marginal emissions.

On the other hand, plugging my car into the grid presumably increases the load, which will be supplied by non-renewable generation (since renewables don't yet cover 100% of demand).

What you have described is the marginal energy -- basically, which power source will be adjusted in response to a change in demand. This is determined by a complicated mix of physics, engineering, market forces, and, of course, weather, however by analyzing historical data it's possible to determine how this varies with time, without needing to understand all the complicated factors that influence it.

The paper "Marginal greenhouse gas emissions displacement of wind power in Great Britain" provides an analysis of the marginal emissions factors considering both time of day and month of the year.

The charts below show the marginal emissions factors (MEF) for 2009 (in red) through 2014 (in black). You can see that as wind power capacity is added to the grid over time, the overall MEF has dropped, but there are still daily and seasonal variations.

Specifically, it would be best to charge during the late afternoon in December, when the MEF is lowest.

Another interesting result from the paper is that as the wind output to the grid in any moment increases, the MEF also increases: 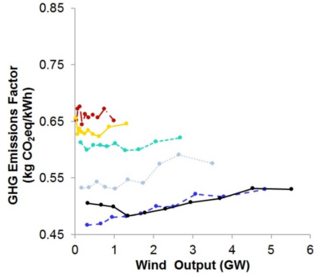 This actually indicates that charging could be best when there's a medium amount of wind -- not on the windiest days. The paper speculates that the reason for this trend is that high wind output correlates with high system demand, meaning that most gas plants are already online, and a higher proportion of marginal energy is actually coming from coal plants.

However, this paper is from 2014, and there have been significant changes to the grid makeup since then. From UK Energy Brief, 2021, you can see that coal capacity ("conventional steam") has reduced by nearly half, while renewable (mostly wind) has nearly doubled. 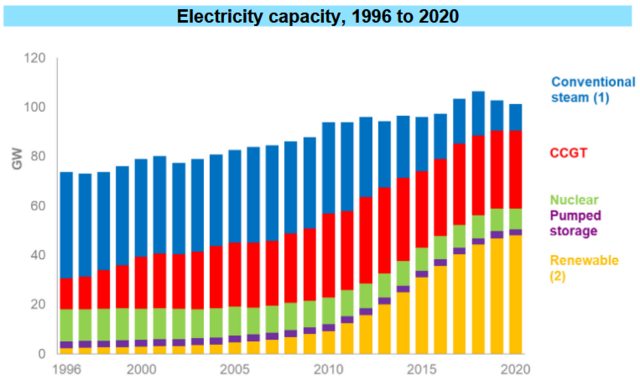 Further, the UK government forecasts the long-run marginal emissions factor for the overall grid, out to 2100. "Long-run" just refers to a permanent change, more useful for long term planning and analysis. The data is available here: Green Book supplementary guidance: valuation of energy use and greenhouse gas emissions for appraisal . I put together a chart showing how the emissions factor is expected to change over time:

From this we can see that as renewable penetration on the grid increases, the timing of when power is used becomes less and less important; by 2040 or so, it won't really matter at all.

Unfortunately I wasn't able to find any updates to this research since 2014, and the National Grid's very fancy carbon intensity API doesn't account for marginal emissions at all. But there is some other related research:

TL;DR: It is a difficult juggling act to know when to plug in the car. It depends on the energy mixture of both the fossil fuels and the renewables.

First of all an interesting read would be the following question and answers, in order to give a brief intro how does electricity generation works -- if you are not familiar with.

Additionally, yes it makes sense to plug in your car on windy days (on the wind farms) if you can afford it. However, obviously that is not always possible.

IMHO, what is very important to understand is that different fossil fuel generators have different response times. In general power plants (not only fossil fuels) can be categorised as:

The following image presents the ramp rates (the percentage increase in power output per minute). 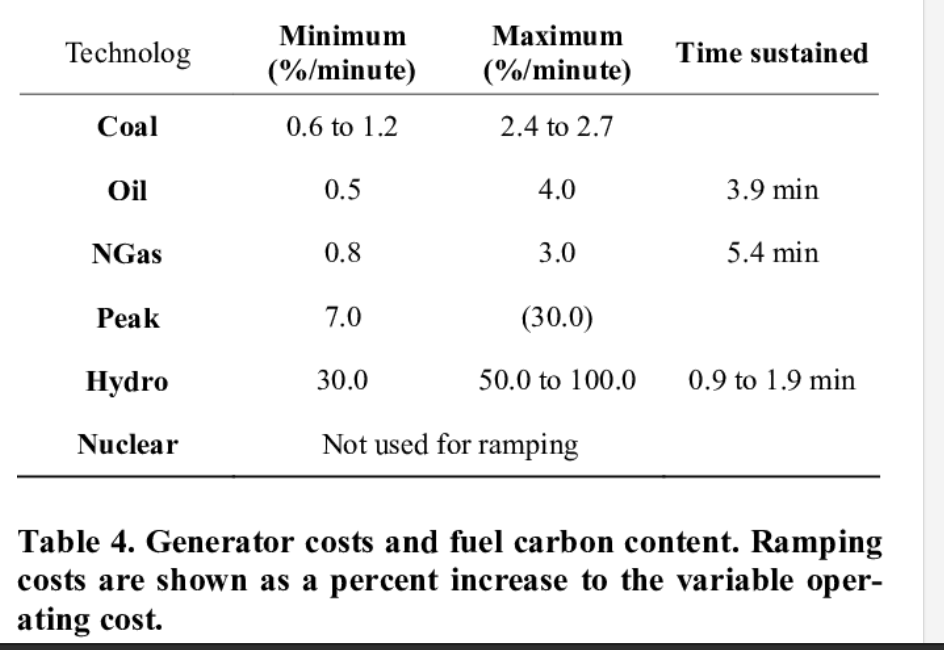 So, the most efficient is a difficult juggling act because it would depend on the mixture of renewable energy. From what I gather you live in the UK, where solar hasn't really caught up compared to other countries. However, Wind has the benefit that it may be producing all day long, compared to solar that has a more predictable pattern (barring cloudy skies).

If solar is the main mixture, then you probably would benefit the environment to plug in the car during the time that the solar is producing (that would take the load of the load following power plants). However, if everybody plug it in at the same time that would create a problem (this actually might be a grid management problem in a foreseeable future that includes massive fleets of electric cars).

On the other hand when wind is the primary source of renewable energy, then (as mentioned before), energy may be produced throughout the day. However, the problem is that it is unpredictable (sidenote: in my native language wind is called "ανεμος", which can be though of as the thing that does not follow a law, which shows the unpredictability).

Also, it is interesting to note that sometimes, when there is excess energy, wind farms can act as a type of "consumer" instead of producing energy. That is primarily done so that the frequency stability is maintained.

Plug your car when energy prices are at lowest....The cheapest electricity can be found during “off-peak” hours when demand is low. For example, on the East Coast, summer off-peak hours might be from 8pm until 3am, summer nighttime temps tend to be lower

You are assuming a very unlikely scenario, a network so tightly organized that there is not enough wiggle room to accept your tiny draw on the network.

A more plausible assumption is that the system has built-in resilience, that is already set to take small fluctuations, only the really huge peaks in the network will trigger auxiliary generators to kick in.

Thus your original idea makes sense and you better charge your car on windy days.

Not the answer you're looking for? Browse other questions tagged electrical-engineering energy-efficiency renewable-energy or ask your own question.

22
How does turning off electric appliances save energy

3
Why not use just one electric motor in a car?
8
Will PVC build up an electric charge and cause a spark?
0
Can you use the kinetic energy of air to power a car?
0
How many batteries can I charge and how long would it take?
0
What is the maximum efficiency of a mechanical electric generator?
0
Does a moving positive charge generate a magnetic field?
0
how to avoid a clash of magnetic charge and electric charge
0
Sonomotors, Sion: Can this electric car really charge up to 30km only from its solar cells?
8
Why is hydro-electric power still scarce in some places?
0
How Hard Is It Too Convert A Car To Run An Electric Engine?