Why can't trains stop in 2x the distance of trucks from the same speed?

It is my understanding that every axle on a modern train has brakes.

According to this page https://www.engineeringtoolbox.com/friction-coefficients-d_778.html clean/dry steel on steel has a (static) friction coefficient of .5 to .8 and a tire on a dry road has 1.0 or so.

Trains weight more, BUT the normal force for placed on the wheels should go up in direct proportion. If the (max braking) force of friction is the coefficient times the normal force, then I would expect that the max braking force would also proportionally go up with more weight.

So it seems like the only thing different between a heavily loaded truck and train affecting the (max braking) force you could generate is the coefficient of friction. Because this is about half, I would expect the braking force to be half.

Kinetic energy is 1/2 * mass * (velocity)2, which gives you units of joules. As a unit, joules can be re-written as newtons of force through meters of distance. If we have half as many newtons (because half as much coefficient of friction for steel on steel vs tire on pavement) we could assume 2 times the number of meters to stop the same mass.

On top of that, it seems that increasing the mass wouldn't increase stopping distance (assuming the brakes and discs survive the increased energy dissipated): an increase in mass should proportionally increase the kinetic energy AND the maximum static friction (= max braking force), causing the two to cancel for a same stopping distance.

(And maybe it could be even less if the train can do eddy current braking to the rails where a truck has no such option.)

Edit to add a few assumptions:

TL;DR: temperature dependence of the coefficient of friction

After doing some calculations IMHO the main factors IMHO affects the braking distance of trains compared to trucks is the increase of wheel temperatures during braking which leads to a corresponding drop of coefficient of friction and at a (significantly) lesser degree the reduced Aerodynamic drag per kg of the vehicle.

The wheels of a train at full braking locally develop high temperatures in the order of 200-400 degrees (see following link, table 10).

However, increasing the temperature beyond 300 $^o C$ decreases rapidly the friction coefficient. See image below that the coefficient of friction loses approximately 40% of its value from 300 to 400 $^o C$ (for that specific metal) 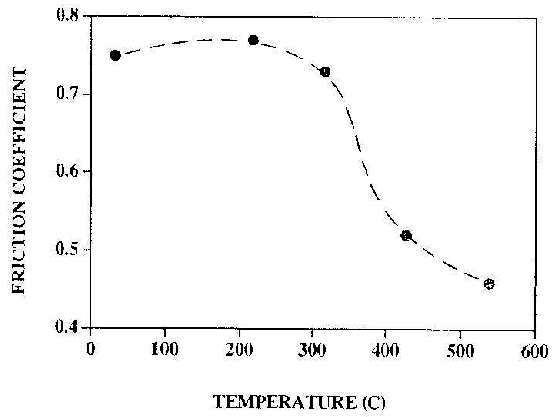 Since the friction coefficient is smaller and drops further the train is expected to require more braking distance during emergency braking.

Aerodynamic drag does not play a significant role according to the calculation. However since I did the calculation I am adding it for reference. The characteristic I considered were.

So the aerodynamic drag per kg is approximately 6 times times more for a truck compared to a train (with one passenger cart), although its is still very small compared to the overall acceleration.

Train brakes don't know how much load is in the car. They are applied the same whether the car is loaded or empty. If you had a bunch of empty cars, then a bunch of full cars, there would be a massive compression of the full cars pushing on the empty ones during braking. So braking is done very slowly on freight trains to manage coupler loads. On passenger trains, the weight variation is much less of a problem, and the trains are shorter and can distribute the weight, so they are able to safely stop much more rapidly.

From the moment the wheel of a moving object is fully locked, due to momentum, the object will continue to skid forward until the inertia force is exhausted by the friction (inertia force = shear friction), which can be expressed as below:

From kinematic equation, the stopping distance can be obtained,

For comparison, assume the train and the truck both have the same speed when the brake is fully engaged (the wheel is locked), and ignoring all other factors, then

I see nobody came up highlighting something interesting: the wheels material. This won't be an exaustive answer but will point out something not trivial that must also be accounted for in such analysis.

Truck wheels are made of rubber, an interesting proprerties of polymers (rubber are polymeric blends at the end of the day) is that they have an energy histeresys cicle. A consequence of this is that we can tune the material to have a defined energetic behaviour within given stress frequency ranges. Think it like this, wouldn't be great to have a wheel that dissipate as less energy as possible when spinning fast but still able to dissipate energy when spinning at lower frequencies (like when braking)? Turns out this is not only possible but is something common rubber tires rely on. (for further info you can dig polymers' complex modulus, the imaginary part of such value is called also Loss Modulus and it is related to the viscoelastic nature of polymers, meaning their frequency-domain response)

This is obviously not the case of steel made rail wheels. Steel is not viscoelastic and it is not capable of the same energy dissipation thus brakes must account for it all.

If a train were designed to only travel in straight lines, it could be made to stop much more quickly and effectively than is possible with today's trains. Unfortunately, it is necessary to limit braking force when a train is on or near a curve for a number of reasons, most notably:

If trains had separate mechanisms for an emergency stop triggered by an equipment malfunction, versus an emergency stop of a perfectly functional train, necessitated by outside events like a track obstruction, and if the latter could be constructed to distribute the maximum possible braking force safely throughout a train, stopping distances for the latter kinds of stops could be greatly reduced. Such a design, however, would increase cost and complexity, add many new points of failure, and complicate the notion of "fail safe". If a train is being operated properly, a braking system failure that triggers passive activation of all brakes would not create a dangerous condition. If a train were in a situation that required stopping faster than would be possible via passive braking, however, a failure that put all brakes into "passive stop" mode would extend the stopping distance, thus possibly creating a dangerous condition where none would otherwise have existed. Consequently, having a system trigger passive brakes if anything goes wrong would cease to be a "fail safe".

Not the answer you're looking for? Browse other questions tagged rail braking or ask your own question.

14
If the emergency brake in a train is broken, do the passenger car brakes still work?
3
Why do all high-speed trains run on electric track (as opposed to normal track with diesel-electric trains)?
7
Why do some high speed trains have long noses, while others do not?
3
Why do trains not have a high-friction emergency braking system?
1
What determines the maximum possible slope of rail transportation (without rack)?
4
Can a Foucault's current brake be used on the rails themselves to brake trains?
1
Why do trains use the same wheels for staying on track and propulsion?
17
Why are train brakes so complicated?
14
Why are multiple locomotives attached only to the front for larger trains?