A significant barrier to my understanding of typical engineering stress vs. engineering strain curves is that for certain values of stress, there are multiple values of strain (i.e., the stress-strain curve is not invertible in the mathematical sense). This is an issue for me because in my mind, I make sense of stress-strain curves in terms of the tension test I'd conduct to make the plot. I imagine that in a tension test, tension is added to a specimen incrementally and at each increment, the specimen's strain is noted.

How must I modify my view of the tension test used in obtaining experimental stress-strain curves to improve my understanding of what the curves are working to communicate? I am sure most of you reading this know the typical stress-strain figure I have in mind, but I have provided a basic example from Wikipedia below just in case: 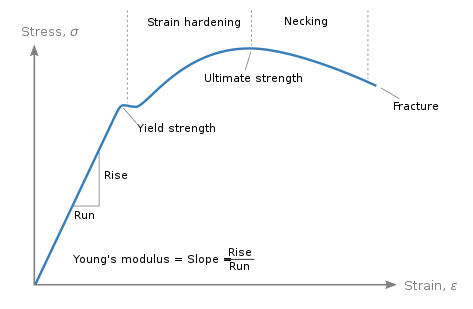 Instead what most standards for tensile testing nowadays require a constant displacement rate. I.e. you have a setup similar to the following (it may vary of course) 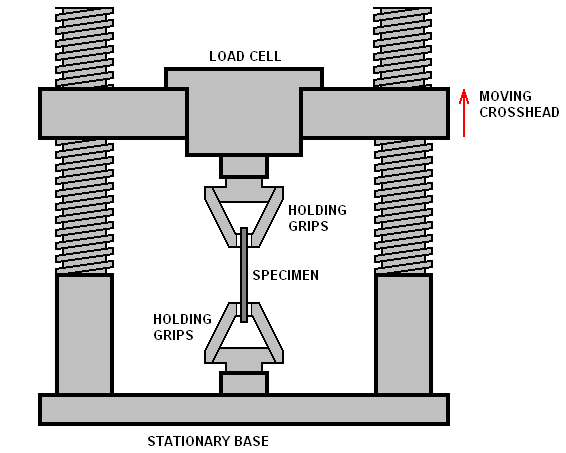 The crosshead (horizontal bar that the load cell is attacheds) moves at a constant rate. As the displacement changes, the load required changes. The end result is recorded values of displacement and force.

Below is a comparison of the two (engineering vs true) for different materials.

For engineering stress-strain curve, the only region where you would see basically two discrete strain values for one single value of stress is the necking, i.e. the region beyond Ultimate point on the curve. What happens there? The structure looses its stiffness and load bearing capacity, and just keeps on shrinking (in the necking area) without taking a significant amount of load. However, for the engineering stress-strain curve, since we use the initial parameters to determine the stresses and strains, this would mean that the strains are increasing (since the deformation is increasing) at the necking area, but the load taken by the structure keeps on decreasing. Now, since stress = F/A0 (where A0 is the initial area), the F (load taken by the structure) decreases hence the stress begins to decrease. Determining the load F taken by the structure during necking is also not an easy task, but they make some assumptions while finding it out during necking phase.

The structure becomes very complicated beyond the Ultimate point. Engineering stress-strain curve is not even utilized beyond this point since it doesn't represent the actual behavior of the material in a tensile test. Therefore, I am not in favor of having Engineering stress-strain curve beyond the Ultimate point, but they put it in the figures, not for usage but just for understanding. Even it becomes extremely difficult to obtain the proper True stress-strain curve in the necking region, because you need to track the instantaneous changes in the area at the region of necking, which are not at all an easy task.

15
Why do we even use engineering stress?
4
How does a graph with tensile stress-strain curve and compressive stress-strain curve superimposed look like involving true stress and true strain?
5
Do all ductile materials experience necking before fracture?
10
Why does the stress-strain curve decrease?
0
Normal and tangential stresses
1
LS DYNA Material Model 163, Modified Crushable Foam
2
Does perfectly elastic and perfectly plastic material make any sense?