Slope of the Bending moment diagram where a point force acts

Consider a beam that is arbitrarily loaded and at any distance x, we take an element in the beam between two sections, where a point force acts as shown. 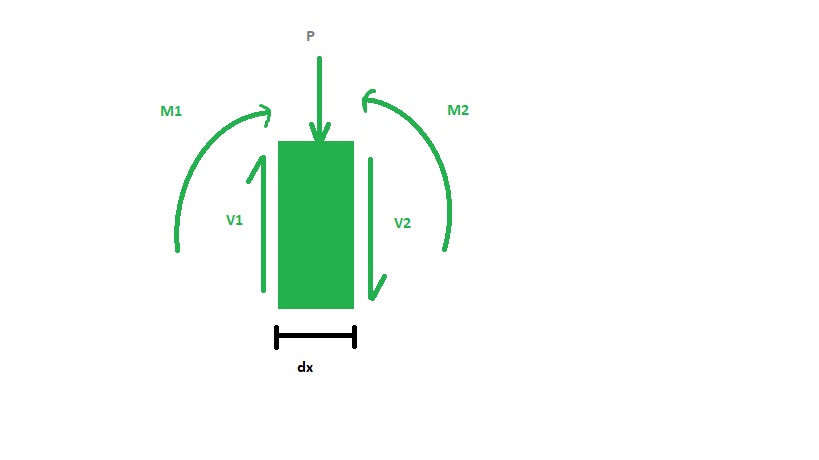 Let us assume the directions of shear force and bending moment to be as shown in the figure.

Applying the equation of equilibrium we get,

Note: Shear force which tries to rotate the element clockwise is taken as +ve and Bending moment which tends to compress the upper part of the beam is taken as positive.

We conclude that the shear force abruptly changes as we go from left to right across the point force.

Taking moment about a point on the right face of the element:

My trouble starts from here:

If I try determining the slope of the BMD at x,

However the book I'm referring to says that - "Even though the bending moment M does not change at a concentrated load, its rate of change dM/dx undergoes an abrupt change".

I don't get how the slope undergoes an abrupt change, as from the analysis the slope is turning out to be $$V_1-P/2$$ at x.

Because (to my understanding your problem is more in the interpretation of derivatives rather structural mechanics) I will try to explain it in parallel example. Hopefully it will make sense.

The acceleration in time t will abruplty change from positive to minus.

You can apply the same logic if you equate:

the derivative of velocity with respect to time is Acceleration .

The derivative of bending moment with respect to distance x is the shear force.

1
How would the axial force in a rod of a doubly-built in structure be determined?
1
Shear force and bending diagram un-uniformly distributed load
1
How to check if bending moment diagram is correctly drawn
0
Relationship between shear force and load intensity
0
Determining the ratio of bending moments in parts of a composite beam