How will the reaction moment on the support be distributed in terms of forces in this model?

Consider a rectangular cross sectional solid beam, fixed at one end and a uniform shear force applied to the other end.

Below shows the side view for this beam.

Now, I change the support area as shown below. How should the force distribution be now?

In the first image, above the neutral axis we already know that the structure will be in tension while below the neutral axis, the structure will be in compression. The net upwards tensile force and net bottom compressive forces are equal, and when combined together, the resultant is a reaction moment (with no net reaction force along the longitudinal axis, and only net reaction force to counter the shear).

Now, for the second image, again the reaction moment will exist. Since no external force is applied along the longitudinal axis, there won't be any reaction force along that axis. The only reaction force that will exist is the force to counter the shear. So how would the tension and compression forces be distributed (on the cross section marked with blue line) so that they will return a total reaction moment only?

If your question is :

how should be the force distribution at the cross section right before the fixed support? This was my actual question, actually.

Since the structure needs to transfer internally a bending moment right before the support there will be a tension layer and a compression layer. The combination of those layers in each cross-section is that creates internally the bending moment that resists the load.

The exact size of the tension layer and the compression layer (they need to be somewhat symmetric, even for the simple case (isotropic material, constant cross-section) is not something that is usually covered in textbooks. IMHO the best way to address that is either experimentally or FEA.

The stresses will be dense at the support and gradually fanned out per the elastic property of the material of the beam. Theory of Elastic Plate, or the finite method, is required to find the exact/approximate distribution width ($b_{EFF}$) alone the X-Axis. 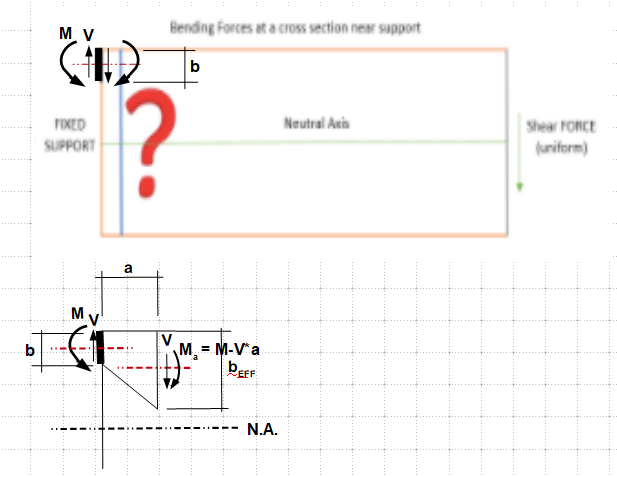 We could think of the second case as a beam welded to the support only on the top part as you show say with a length H/4, with the beam length L, and its height, H, the shear substituted with a point load P.

There will be a complex pattern of stress distribution from the weld to the section you show. The shear will spread to the entire height of the beam, shown red, close to a uniform shear same as P/H and the tension will fill in the triangular tension I have shown with a blue line on your sketch, and the compression will be supported by the support.

If the support can not resist compression if the vertical portion under the weld can not support compression then the weld or connection must support both shear and the entire moment and transfer them to the blue section. Then there is potential for failure due to stress concentration!

The support on the left can be treated as a beam with two sections with a large stepped depth.

It will have both moment of PL and shear. Therefore it will have tension on top and compression on the bottom plus shear.

But again the huge stresses on the support combined with the fact that due to the stiffness of the rest of the beam will lead to high stress concentration in the small transition are between the support and the blue line in you drew. and will most likely buckle around the support.

I am waiting on the taxi way for my turn to take off. will elaborate later.

Not the answer you're looking for? Browse other questions tagged finite-element-method solid-mechanics or ask your own question.

0
Strain gauge placement to measure a twisting beam
4
Torsion and Bending stress calculated from deflection
0
Calculating the von mises stress in a 3D beam when given stresses and moments on both ends
0
Reaction forces on a three support continuous beam with two of them requiring compatibility equations. Superposition method done wrong!
0
Does the Superposition principle actually make sense in reality for a rod subjected to bending and axial force togehter?
0
Why am I seeing a moment reaction at the supports for these beams in FEM?
2
Is bending moment along a beam independent of the cross sectional area of the beam?