When a car with an open differential turns, why does the inner wheel slow down and the outer wheel speed up?

I asked this in the physics stack but hopefully will get more interest here. So I understand that when driving on a curved path, the inner wheel must travel a shorter distance than the outer wheel. But why?

As the car begins to turn, both wheels want to continue rolling at the current speed in linear motion due to conservation of angular momentum. If the wheels are being driven by the engine, then the torque is equal to rolling resistance on both wheels so both maintain a constant speed. If the car is coasting, then both wheels are braked by rolling resistance by equal amounts. In order to change the speed of the inner and outer wheels, there must be additional torque(s), which must be different for the two wheels. What is this torque, and where does it come from? Assume that both wheels are rolling without slipping.

In order to change the speed of the inner and outer wheels, there must be additional torque(s), which must be different for the two wheels. What is this torque, and where does it come from?

TL;DR: The kinematic constraint imposes the redistribution of forces on the four wheels. This redistribution is permitted due to the car differential.

It is very common that first the kinematics is considered and then the kinetics are applied. Consider the following example of a hammer athlete: 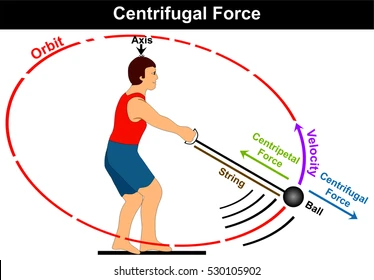 Given the above information I can find out the force that the athlete has to apply on the string that is required for this motion to be accomplished. This is done through the use of kinematics. I.e. knowing the motion I can calculate the forces requires to produce this motion.

My point here is that:

the motion constraints can impose/determine the required forces.

In the example you are providing, (the car during a turn without slipping), kinematics play the primary role. I.e. the rear inner wheel needs to travel a smaller distance over the same time compared to the outer wheel. 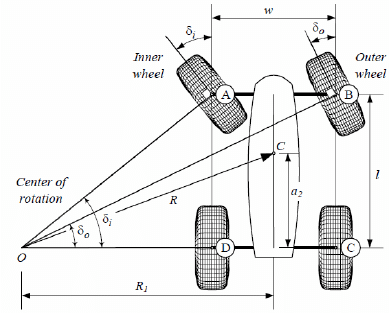 if the symbols in the above image are used, then for a turn of angle $\theta$ the distance travelled is:

(When there is no sliding) Kinematics also determines the velocity and acceleration for each of the wheels.

After that point, since the position, velocity and acceleration for each wheel are known, then you can use the kinetics (inverse) to see what forces are required to produce that motion.

In this instance, what happens (even if you consider a rigid chassis and infinite stiffness car suspension), what happens is that the turning redistributes the vertical forces on each wheel. That changes the magnitude of the friction on each wheel (and also affects the rolling resistance although rolling resistance is not as important). However the magic is in the differential. 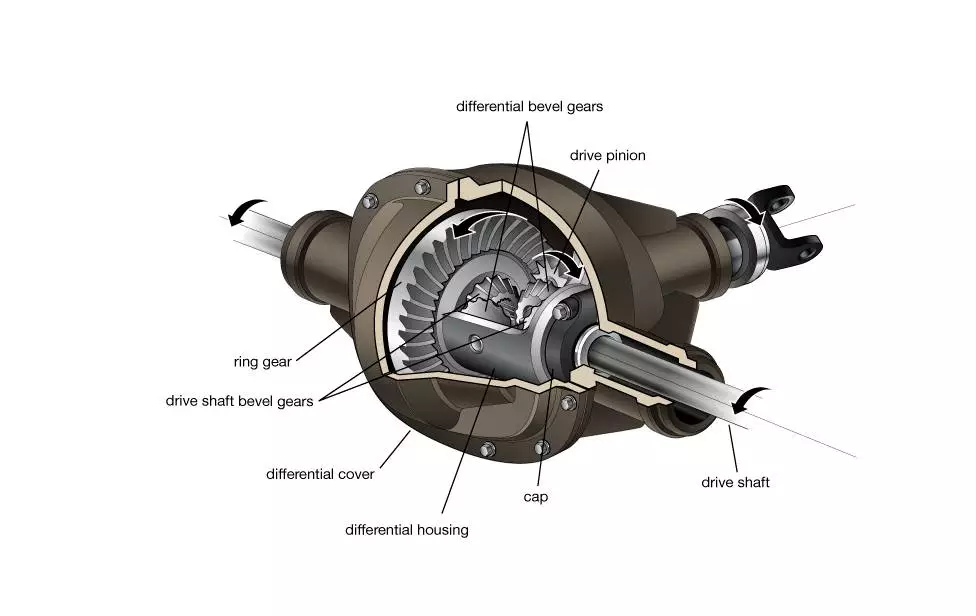 The differential allows (at the same time) each wheel to spin at its own velocity and also allows them to "communicate" (for lack of a better word) and distribute the power to each wheel.

In the particular case of the open differential, when the car is jacked up, and the engine shaft is not rotating, then rotating one wheel has the effect of rotating the other wheel in the opposite way. So, the angular momentum and is preserved.

I will focus on this case.

So, when an idling car is turning, each wheel is free to spin at its own rate, and at the same time if the outer is spinning faster, the open differential makes the inner wheel spin faster (see the video in this answer). At this point it is important to remind that the torque that slows down the wheels when the car is coasting is from the rolling resistance on each wheel (which is the longitudinal component of the friction). To simplify matters, we'll assume that the rolling resistance is zero (perfectly round wheel) and all the friction force between the wheel and the road is available as traction force.

When the car is coasting, the force of the rolling resistance is usually small compared to the radial component (centripetal force). The moment caused by wheel traction (friction forces) in the radial direction (Centripetal) is what causes the rotation moment that turns the car. (See image below) 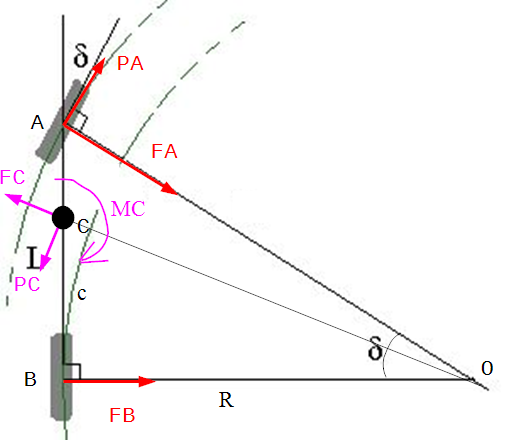 Also it is important to note that the contact of a wheel is not a single point but a contact patch that has a complex behavior.

car accelerating through the turn

When the car is using the engine power, then there is an additional factor that affects the kinetics (dynamics). I won't delve into this case because there are a number of factors that will also affect this outcome (namely FWD, RWD, 4WD etc). However bottom line is that there is added torque from the engine. In that case again the differential allows spliting of the torque (and redistribution of power) so that the kinematic constraints are satisfied.

This is a simple explanation/observation. A two-wheel dolly rotates along a circular path by a constant torque (T). The position of the wheels changed from point 1 to point 2 in one second (t = 1s), what you can say about the distance that each wheel has traveled, and what is the speed of each wheel at the turn? 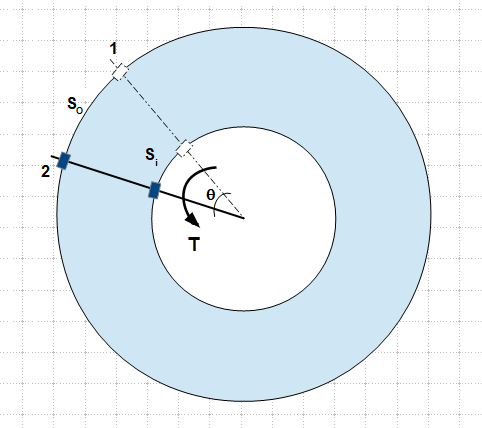 ADD: I think it is imperative to understand what the "differential" in a car does. Here is an explanation I found that is easily understood by a non-automotive engineer or mechanical engineer:

What does a differential do inside car?

"The main purpose of this differential component is of 2-folds:

Normally, all of the torque of an engine usually goes into just one transaxle or transmission, and it sure needs to be directed at some point to the two wheels of the car. Now, the side gears of a differential are the ones that will mesh with the larger pinion gears to actually perform this function.

The spider gears are the ones that allow for one wheel of a car to turn faster than the rest, thereby preventing wheel scuff and binding whenever you are taking a corner or bend with your car." https://naijauto.com/car-maintenance/differential-in-car-3018#:~:text=Latest%20news%20articles%201%20What%20is%20a%20Differential%3F,...%203%20Simple%20signs%20of%20a%20bad%20differential

"Differential" - "As part of the front and/or rear axle assembly, the differential plays an integral role in how your car makes turns. The differential is designed to drive a pair of wheels while allowing them to rotate at different speeds. This function provides proportional RPMs between the left and right wheels. If the inside tire rotates 15 RPM less in a turn than going straight, then, the outside tire will rotate 15 RPM more than going straight." https://www.sunautoservice.com/what-is-a-differential-on-a-car/

Let's imagine a car turns to the left 360 degrees, a complete clockwise circle.

Let's say the differential is removed for maintenance and let the rear wheel turn freely. If tow the car into a turn we see the outer wheels turn faster. the tighter the turn the greater the difference of the speed.

The differential just allows this. The steering pulls the front wheels to left with a force F to left. (in our example) $$F* D_{D=wheelbase}=Torque$$

This torque causes the rear wheels to turn at different speeds. Let's imagine the steering could turn left all the way to 90 degrees. Then the right wheel would accelerate forward and the left one backward. 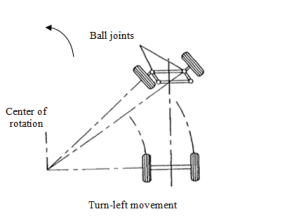 This video went a long way to help me understand how differentials work and how resistance on one wheel translates to motion on the other.

Around The Corner - How Differential Steering Works (1937)

Sorry for my bad English.

I believe that the confusion originates from a misunderstanding of the nature of rolling resistance. In the question the following is stated:

If the wheels are being driven by the engine, then the torque is equal to rolling resistance on both wheels so both maintain a constant.

That can only be stated if we assume the wheels are weightless, which in turn make the system undetermined meaning that from the known physical equations we cannot figure out the speed of the wheels, so additional assumptions like no slipping should be introduces. In such a case an explanation for the different rotation speed goes like this: since that wheels cannot slip and the outer radius is larger than the inner one we conclude that the outer wheel is rotating faster.

That is totally unsatisfactory if we want to understand the nature of rotation but allows us to ignore some aspects of the rolling resistance.

If we do not assume the weightlessness of the wheels there is no equilibrium between rolling resistance and the engine torque, which in the end results in different rotation speeds of outer and inner wheels.

The question of why rolling resistance of outer and inner wheels differ is far too complex to describe in depth but i hope that the following line of thought, although somewhat incorrect, would lead to understanding: when car starts to turn the outer wheel starts to cover more distance meaning more micro collisions with the road particles with more speed so the rolling resistance is more for the outer wheel.

Not the answer you're looking for? Browse other questions tagged mechanical-engineering automotive-engineering car or ask your own question.

9
Why does reducing the amount of emissions control improve the fuel economy of a car?
2
Calculating Car Engine RPM for Game
1
Does toe-in in the wheels of a car help with straight-line stability without steering?
2
Calculate maximum acceleration of a car from rest (optimum launch)
0
In equilibrium is engine torque zero? Vehicle dynamics
0
Why does a tractor not do wheelie with a lot of weight on the trolley?
1
Why rotation factor of bearing for inner ring is 1 and for outer ring is 1.2?
0
Why does my trimmer feels heavier when it is operating and its fully charged?
0
Is this kind of steering possible?