All wind turibne use low lift coefficent airfoils from 1.0 to 1.5.

Why not use high CL airfoils to get maximum torque?

I've finally got a few minutes to try to answer this.

Torque is bad. It's necessary, but it is bad. Ideally, you want the turbine to spin infinitely fast at almost zero torque, not slowly at high torque.

To understand why, lets look at how energy is extracted from the air and transferred to the rotor. If we take an earth reference frame aligned to the free stream air, and have a rotor plane that is perpendicular to that freestream, then the freestream has a velocity components of u=wind speed, v=0, w=0. Downstream of the rotor, we have u=ud, v=vd, w=wd. sqrt(vd^2 +wd^2) is the wake swirl velocity in the rotor plane. Wind speed - ud is the change in axial velocity of the flow.

To get maximum power out, we need to maximize the product of mass flow through the rotor times the energy change per unit mass of air. As the axial velocity slows down, the air stream has to get fatter to preserve mass continuity, so air goes around the rotor instead of through it and mass flow is reduced. If you don't slow the air down, all the air goes through the rotor, but you don't get any energy out of it, so power is zero. If you slow the air way down, the energy extraction per unit mass is high, but the mass flow is very small, so power is very low. You need to create a modest axial velocity change which permits a high mass flow rate to get best performance.

So what has this to do with torque? Driving torque creates an equal and opposite reaction in the wake - wake swirl. All the swirl energy in the wake is energy that is being robbed from the rotor. The only way the wake can gain swirl velocity is at the expense of axial velocity (conservation of energy). So swirl causes a lower downstream axial velocity, and that lowers the mass flow rate through the rotor. This is the hard part, that the force from the fixed rotor causes a swirl momentum, but when you apply conservation of energy, the axial velocity has to slow down to keep the system energy balanced. This is not at all intuitive, because there doesn't appear to be any force slowing the air axially. But there is a force, and it is called induced drag.

So at this point, there is an ideal wake shape that can be computed. It has some swirl and some radial expansion at the rotor plane, and the axial flow is somewhat slower than free stream. But the shape, ie the relative size of the induction factors, is the same for all HAWTs under ideal conditions. And when you design a blade set to produce this ideal wake (called inverse design) and account for friction and structural mechanics, you don't want a high Cl blade. You want high rpm (high tip speed ratio), low blade count, low solidity, and low torque.

This entire argument is usually handled a bit differently from a mathematical standpoint because the relationship between axial velocity and swirl velocity can be gotten at in different ways. But wake swirl lowers the mass flow through the rotor and lowers the available energy per unit mass as well. So you want to make it small. And wake swirl is torque.

One reason I can think of is Because increasing the $c_L $ increases also significantly the coefficient of drag.

The increase of drag is a result of increasing flow detachment from the airfoil.

could the situation driving this design decision be the high-wind scenario?

I realised that I was only thinking about fixed blade wind turbines, which are usually small wind turbines (just a few kW at best). 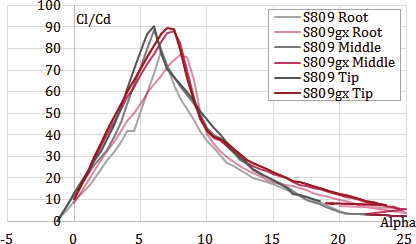 Figure: Gliding ratio (Cl/Cd) distribution of the airfoil at the root, middle, and tip parts of the blades (source Youjin Kim)

What the above image shows is that $C_L$ is proportional to $C_D$ and the ratio is near unity for a very small region (beyond that the drag overwhelms the lift). 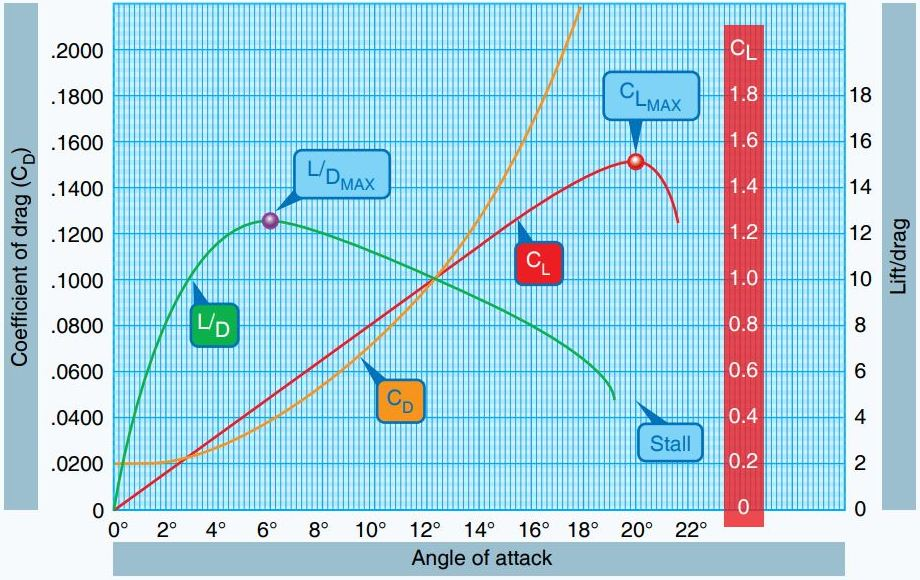 The wind turbines are designed to work under a wide range of wind velocities.

They adjust their angle of attack and $ C_l$ to the optimal for the existing condition.

Relative wind angle is the resultant vector sum of wind velocity and the speed of the airfoil perpendicular to the wind, for example, if the wind velocity is horizontal 20ms and the airfoil at point $X$ is rotating, ascending, with a velocity pointing up with 3.5ms, the relative wind angle is 10 degrees. And if the airfoil has a chord angle of 8 degrees the angle of attack of the airfoil will be $8+10=18, \ $ and the turbine will stall. It is, for this reason, the wind turbine blades are twisted because the angle of attack changes relative to the position of $X$.

I will add a sketch later.

Not the answer you're looking for? Browse other questions tagged aerospace-engineering aerodynamics wind-power or ask your own question.

2
Is the main goal for wind turbines to take maximum energy for a given diameter?

1
Tethered Balloons vs Towers for Wireless Communication
0
Pressure Coefficient with a Minima of 0 on Compressor Airfoils in Cascade
0
Small water pump powered by wind turbine : what type?
0
Are wind powered drones and platforms possible?
3
Why not build a wind turbine like a vertical Kaplan turbine?
0
What aerodynamic equation should be used to determine the drop in air pressure over an airfoil embedded within a vertical pipe?