How to determine the "complete turbulence" boundary line in a Moody diagram? 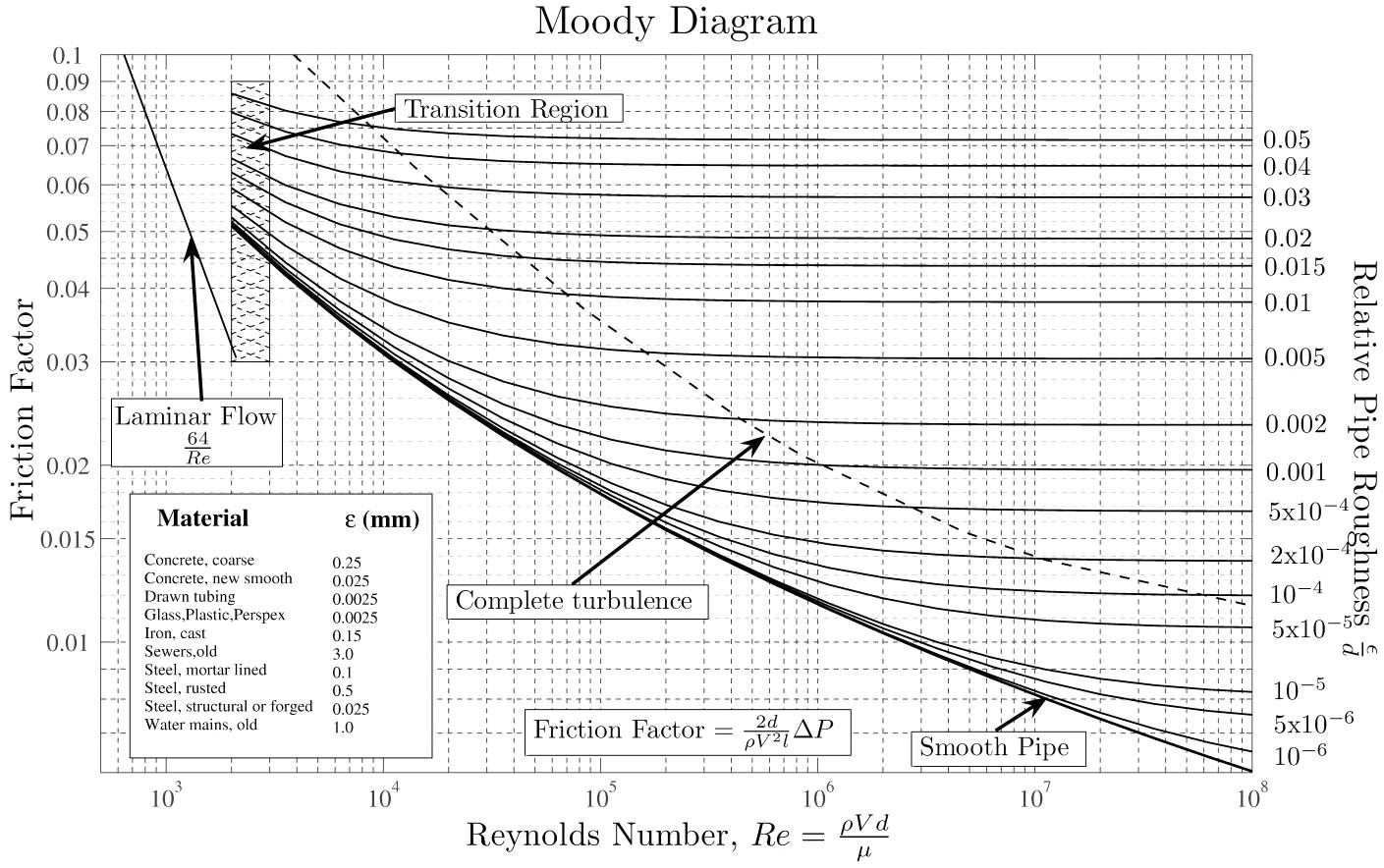 show a dashed line frequently labelled as either "Complete turbulence", "Wholly turbulent flow" or "Turbulent flow", but I haven't been able to find how to determine this line (and, believe me, I've done some research). One might say that this line is the loci of all the Reynolds numbers for which the friction factor curves assume a flat horizontal shape (given a relative roughness $\epsilon/D$), but that doesn't seem to be the case as the dashed line often crosses friction factor curves where those aren't yet flat.

Another curious thing is that I observed that the location of this "Complete turbulence" line seems to disagree from diagram to diagram to a lesser or greater extent.

Any insights on this topic will be appreciated. Thanks.

Moody (1944, Trans. ASME 66(8):671-684) gives the following equation for the onset of complete turbulence: $$\frac{1}{\sqrt{f}} = \frac{\textit{Re}}{200}\frac{\epsilon}{D}$$ and attributes it to a 1943 conference paper by Rouse. I've been unable to obtain a copy of the Rouse paper, but from hints given by Moody, I think the equation represents the surface in $\left(\textit{Re},\epsilon/D,f\right)$ space on which the laminar sublayer thickness is equal to the surface roughness.

This equation, when plotted, closely matches the version of the dashed line in Moody's own Moody chart. However, it isn't quite such a good match to the dashed line in the Moody chart reproduced (from Wikipedia) in the question (as OP observes, 'the location of this "Complete turbulence" line seems to disagree from diagram to diagram'). Digging through the Wikipedia history of this Moody chart, one discovers one possible explanation: the lines therein were not constructed using the Colebrook-White equation, but using the (slightly less faithful to empirical data, but easier to implement computationally) Swamee-Jain equation. There's nothing wrong with that in itself, except that the Wikipedia Moody chart tries to go to high relative roughnesses and to high Reynolds numbers, beyond the domain where the Swamee-Jain equation is a good approximation.

I would be surprised if the determination of this line is theoretical. I would expect that the exact shape and position has been derived after a lot of experiments and fitting data.

In 1944, Lewis Ferry Moody plotted the Darcy–Weisbach friction factor against Reynolds number Re for various values of relative roughness ε / D. This chart became commonly known as the Moody Chart or Moody Diagram. It adapts the work of Hunter Rouse but uses the more practical choice of coordinates employed by R. J. S. Pigott, whose work was based upon an analysis of some 10,000 experiments from various sources. Measurements of fluid flow in artificially roughened pipes by J. Nikuradse were at the time too recent to include in Pigott's chart.

Lewis Moody (1944) developed the Moody diagram using the experimental data that correlates the Darcy-Weisbach (Brown 2003) friction factor λ and Reynolds number along with the roughness of the pipe.

36
What is the purpose of these diversions in a natural gas line?
8
Estimating Darcy Friction Factors for Critical Flow
13
How to determine the characteristic length in reynolds number calculations in general?
8
How do I select an appropriate turbulence model?
5
How to measure turbulence parameters experimentally?
8
How Can I Determine Multiple Discharges from a Pipe Network? (Knowing the Inlet Conditions)
2
How do you determine how many pumps you need in a pipeline?
0
How do you determine flow distribution at a dividing T-Junction?
0
How are the undersea gas pipelines repaired?