How do ball bearings not crack from a load concentrated on an infinitesimally small point?

How do ball bearings last? Most bearings in a standard hub (bottom of the image) are not actually taking a load. Only the single ball that happens to be at a particular location while spinning takes 100% of the load. If the bearings were cylindrical (top of the image) supporting a rolling plate, it would be slightly better, but not by much.

Regardless of the load (in a bike hub), and even if it's just cyclist+bicycle, that the area is infinitesimally small would suggest that the stress skyrockets towards infinity. And that's before even talking of the higher loads in a car's bearings.

How do ball bearings (in a bike hub) not crack from a load concentrated on an infinitesimally small point? 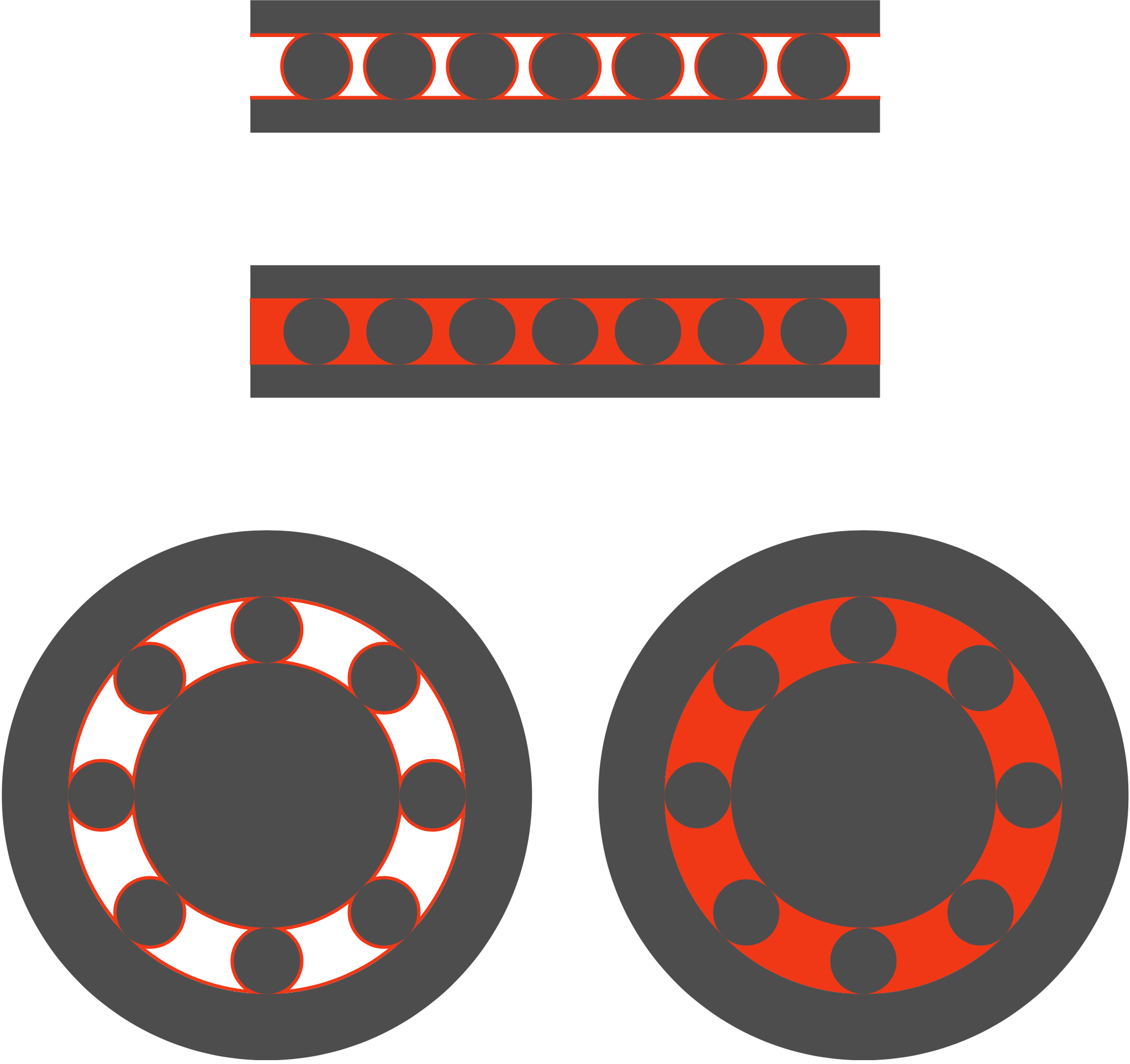 This is a sequel question to a question I just asked on bicycles.SE about how much grease I should use after I overhaul bike hubs—whether I should put so little to keep the wheel spinning freely with minimal drag, or put so much that water ingress would be unlikely (the red areas in the image).

Nothing is rigid, the raceways and the ball in a ball-bearing are no exception. The contact area deflects and accommodates the ball in a small contact surface, not a point.

Also, the balls take the load in groups.

The digrams are from SKF ball-bearings. 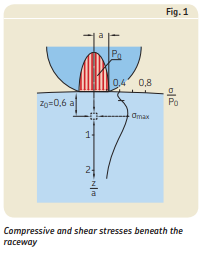 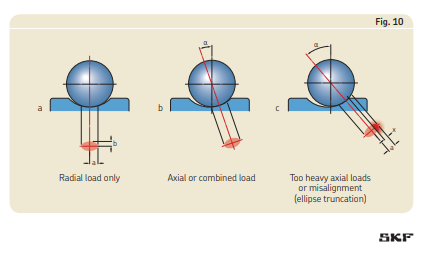 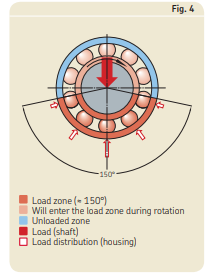 TL;DR: ball bearings deform due to Hertzian pressure and therefore distribute the load

However, the reason balls (rolling elements) don't easily crack is the ductility of the material (and to some lesser extent the treatment of the material)

The Deformation of the bearing balls due to Hertzian pressure contributes to the distribution of the loads and only delays failure. However the mode of failure is not affected. So for a high enough pressure you could have a load that will lead to failure, but you wouldn't expect it to crack.

Distribution of loads due to Hertzian pressure deformation

Every material in deforms when a load is applied. The ball bearing although they are very stiff and seem non-deformable they experience small deformation, due to what its called Hertzian pressure. The deformation is what causes distribution of the loads to neighboring balls. 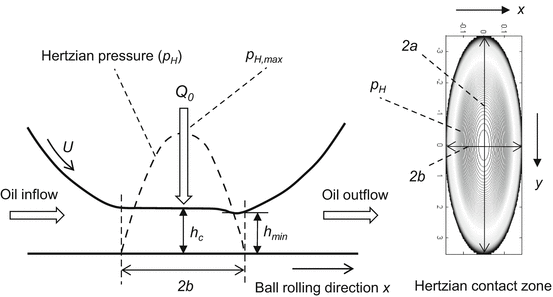 Figure: contact between a ball bearing and a raceway with a lubricant (source Springer)

The end result (exaggerated) is the following: 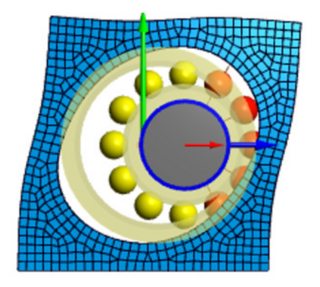 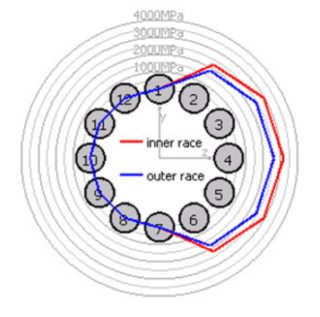 the red ball bearings are the one in contact. Obviously the central one carries the highest load compared to any other single ball. However, the load is distributed at different bearing (see image below)

Also, the load on the central bearing significantly reduces compared to others as the load increases (because deformation is not linear).

When a material is compressed, depending on its ductility it will behave differently.

In the brittle failure there is a plane at 45 degrees (where the maximum shear strength is observed that a crack develops).

In the failure of ductile material under compression, there will be a lateral increase of the ball (like squashing a tennis ball), and eventually when the maximum shear stress of the material is reached cracks will appear radially (see above).

Steel is a ductile material and it is expected to fail in a ductile manner. However, bearing very rarely fail by cracking of the load. By the time the reach a more brittle mode failure, the shape is such that the bearing will not be able to rotate anymore and it will become stuck. This in turns causes additional stresses from torsional moments etc which are unpredictable. 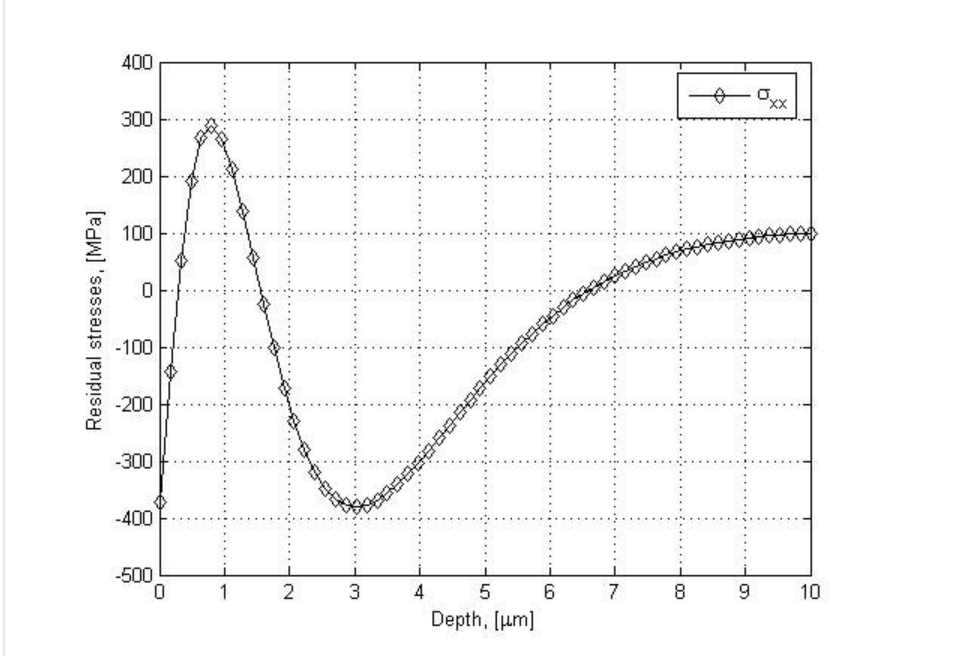 The roller bearings have a curve line of contact - only have to take one apart to see the wear path on the inner and outer race.

As for 1 ball taking all the load - that won’t happen as the load will cause the balls to move allowing the smaller distance between inner and outer race - that amount of movement is limited by the ball guide holding all the balls.

They are very strong, and it is not quite a point as there is some elastic strain. Rolling element bearings are nominally HRC 62, roughly 300,000 psi yield. And have residual compressive stress at the surface that partially offsets tensile stress. You need to be in the secret society of metallurgy to understand the heat-treat process that develops the residual stress. They are 52100 low alloy steel , chrome with 1 % carbon but that doesn't help much. Lubrication is a different story which I do not know but have read that too much grease can be a problem.

Ductility-- of the ball, the race, and the cone-- is indeed a key to the ball not cracking. My experience with bicycle bearings is of having the ball, the race, or the cone show some pitting, and/or for the race to show spalling or cracking. Usually during a repack I found that the balls were in flawless condition. From all this I came to the belief that (a) there was an advantage to the spherical shape (b) the balls were the hardest component, and (c) the relative advantage of the balls improved after some break-in on the race and the cone, as they developed "tracks" in them.

Not the answer you're looking for? Browse other questions tagged stresses bearings or ask your own question.