Is the drag coefficient/velocity of of a vehicle based on frontal area?

Does the frontal area of a vehicle determine the velocity/drag coefficient of a car? A Ferrari 458 has a Cd of 0.33 while a Corvette C6 has a Cd of 0.29. Does this mean the Corvette will have less frontal area and more speed while the Ferrari should make more downforce?

The drag coefficient $C_d$ is defined as:

The answer to your first question is "Yes, the reference area for automobiles and many other objects is the projected frontal area of the vehicle". However, the drag coefficient is usually determined experimentally, and the known experimental results indicate that it also depends on the objects' shape as shown below, assuming the reference area is constant for all cases: 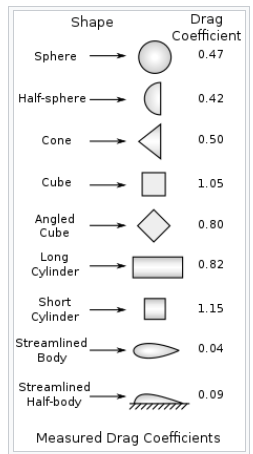 No Cd is not directly related to the frontal area, it has to do with how much that frontal area moving against the stream of air has to fight drag.

For example, consider the old semi trucks' trailers. Because they were boxy they had a large Cd and needed a lot of fuel for even a smalled frontal area.

In modern trailers, they have round corners and adjustable trailer skirts at the end to make them more streamlined.

So a modern trailer with a larger frontal area has a smaller Cd and produces less drag and is much more fuel-efficient.

If we pick two identical cubes and compare them they have identical Cd. Now if you add a half sphere to the front and end of one of the cubes, Its Cd drop to almost half of the other cube.

The $C_D$ is a convenience factor used by engineers to simplify fluid mechanics for cars and aerodynamics.

A simplified explanation is that the $C_D$ normalises the aerodynamic drag to the frontal area, so that is easier to compare different vehicles.

"Does the frontal area of a vehicle determine the velocity/drag coefficient of a car?"

So for example, changing the angles on a rear spoiler, has zero to little effect on the frontal area, but it can change significantly the $C_D$. In that respect those two are independent.

The one case I can think of (there are probably others) that $C_D$ depends on the frontal area, is when the frontal area becomes too small, and therefore the Reynolds number is significantly affected. However, this is probably not too relevant to cars.

So regarding the statement:

Does this mean the Corvette will have less frontal area and more speed while the Ferrari should make more downforce?

Speed is depended on a number of things. I.e. the engine horsepower is important, the gear shift ratio, wheels etc.

Not the answer you're looking for? Browse other questions tagged aerodynamics drag or ask your own question.

3
What is the area when calculating the drag coefficient for a race car wing?
0
Wind resistance inside turbulent flow ("prop wash")
0
Coefficient of Drag (Cd) Question
2
Why do some cars have flow channels in their bodies to decrease drag?
1
How can i calculate drag on an Angled area?
1
Does more downforce affect the acceleration and top speed?