To detect the motion of a human or other heat source, the sensing element has to distinguish between general background heat radiation and that given by a moving heat source. A single pyroelectric sensor would not be capable of this and so a dual element is used. 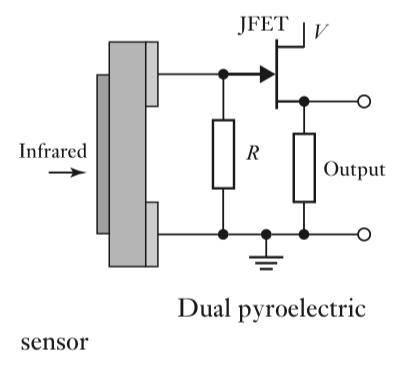 One form has the sensing element with a single front electrode but two, separated, back electrodes. The result is two sensors which can be connected so that when both receive the same heat signal their outputs cancel. When a heat source moves so that the heat radiation moves from one of the sensing elements to the other, then the resulting current through the resistor alternates from being first in one direction and then reversed to the other direction. Typically a moving human gives an alternating current of the order of 10-12 A. The resistance R has thus to be very high to give a significant voltage. For example, 50 GV with such a current gives 50 mV. For this reason a transistor is included in the circuit as a voltage follower to bring the output impedance down to a few kilo-ohms. A focusing device is needed to direct the infrared radiation onto the sensor. While parabolic mirrors can be used, a more commonly used method is a Fresnel plastic lens. Such a lens also protects the front surface of the sensor and is the form commonly used for sensors to trigger intruder alarms or switch on a light when someone approaches.

2
IR sensor with carbon fibre
5
How to obtain sensor failure probabilities?
1
How can I build a proximity sensor?
1
Is it possible to detect specific UVB wavelength ranges using just a UVM-30A UV sensor or similar
3
Send sensor signals to WiFi network
1
How to increase the sensitivity range of MQ3 Alcohol sensor?
1
What is best sensor & method to measure human height?
0
Activating lights using a motion sensor?
3
H2 Sensor in N2 environment