BACKGROUND: I had previously dealt with 2 pipe coils with oddly bend ends. for the most part I was able to use the coil tool and was able to line up a bunch of 2D sketches to complete the odd end bits. When I was done I noted that while what I created matched the views I was working with perfectly, they also had kinks in the pipe that should not be there. I figured this was a mainly a result of the pipes circles remaining vertical instead of perpendicular to the end of the coil path. I figured when I learned more I would go back and try and fix things.

I then stumbled on this drawing and 3 more just like coming up so I figured I should bite the bullet and find out the right way of doing things. 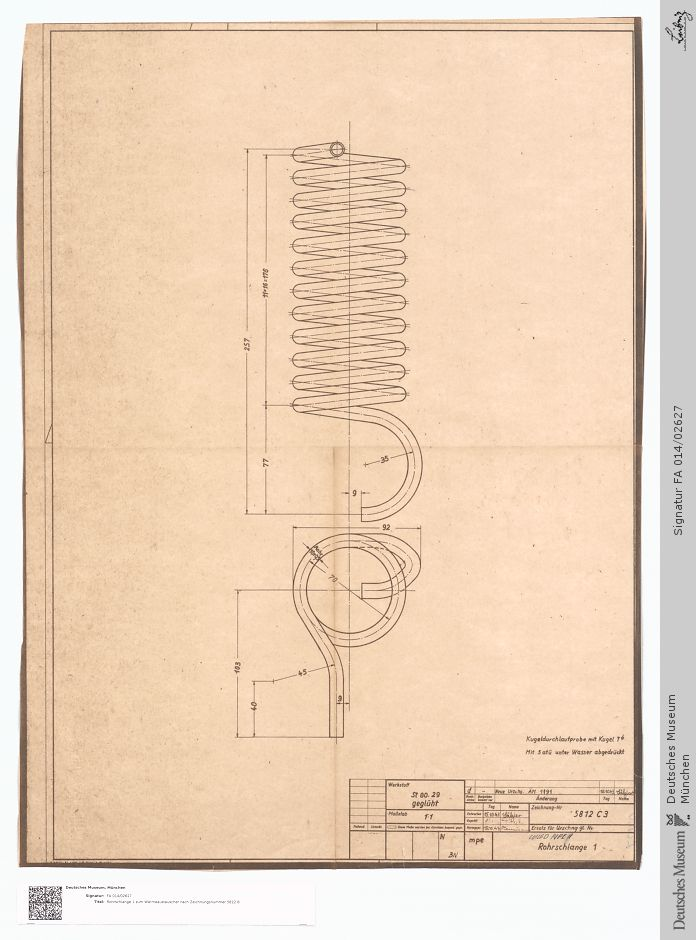 So in order to avoid the kinks in the pipe where various sections meet, I thought I would plot the continuous center line for the whole thing, place the pipe cross section at the start then sweep the cross section along the path. Sounded simple enough.

I started out by plotting the centerline of the top view, adding some key points, and transferring some information from the front view to complete. 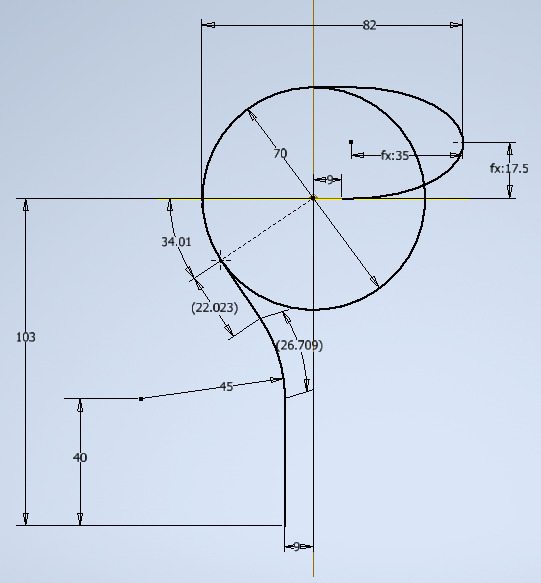 I then proceeded to draw the bottom end of the front view. I assumed that the slope of the helix continued to the tangent point at the quarter mark and then be tangent with the 35 radius circle. This turned out to NOT be true as the line never intersected with the circle.

My next step was to essentially uncoil the 1/4 turn of the helix. I simply used PI/2*Radius to get the arch length. The thought being I would get the start point of the line that would be tangent to the circle. Though as I just typed that I realize my simple uncoil may not have been correct as it did not account for the helix's slope, just the circle. Though probably close enough for the time being. 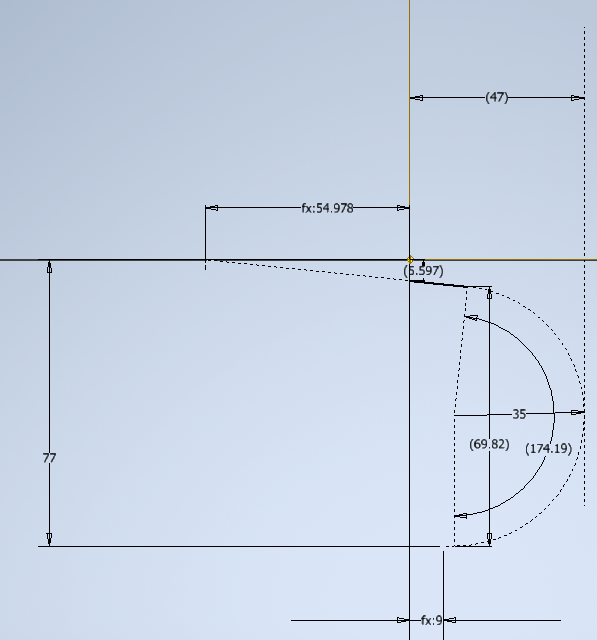 My next step I jumped into 3D sketch for the first time and discovered the Helical Curve tool which I thought would make life easier. The first helix I made was the main coil, and it worked great...it never had to be attached to anything. The next helix I made was the last bottom 1/4 turn at a slightly different pitch (4*Fx:5.597). I then attempted to make a 3rd helix which just plain failed in a major way (others may have failed, but not that obvious if they did). The third helix is almost a half turn going from the edge of the main spiral towards its center (35 radius). 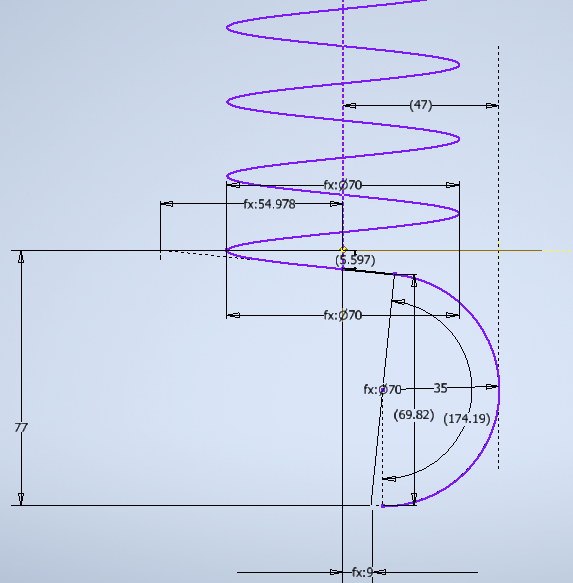 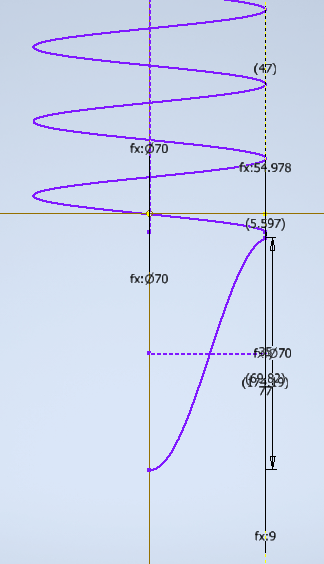 Though I did notice a bit of a kink where the tangent met the start of the third helix. 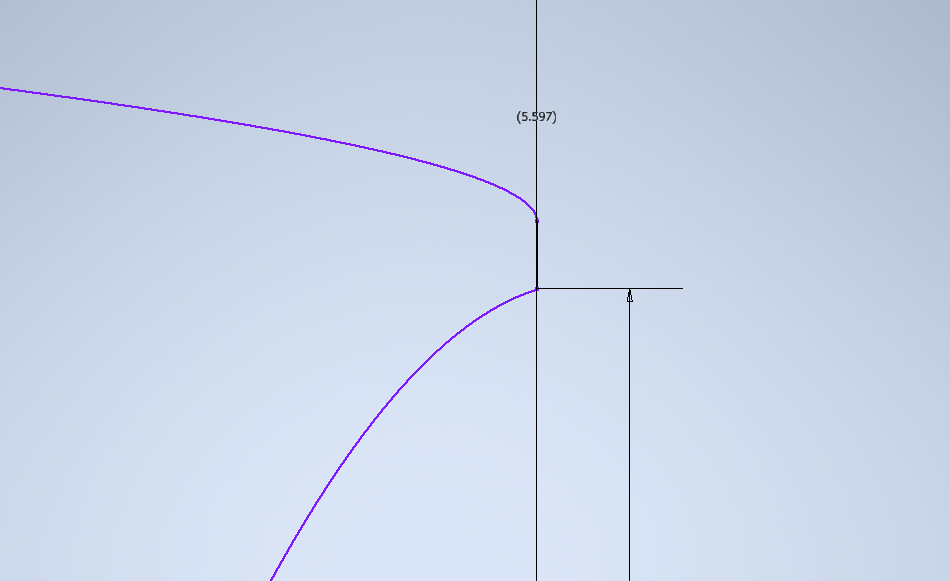 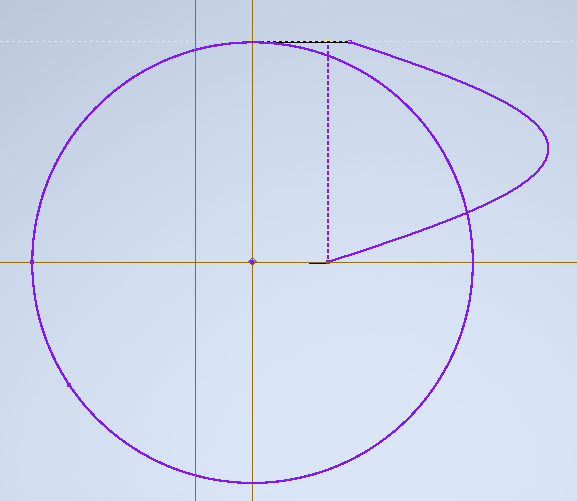 I believe they should be "more" like my initial sketch superimposed below. I say more because my sketch is not perfect. The sketch assumed it was a 1/2 turn when in reality its slightly less. I used a single ellipse when creating the sketch. 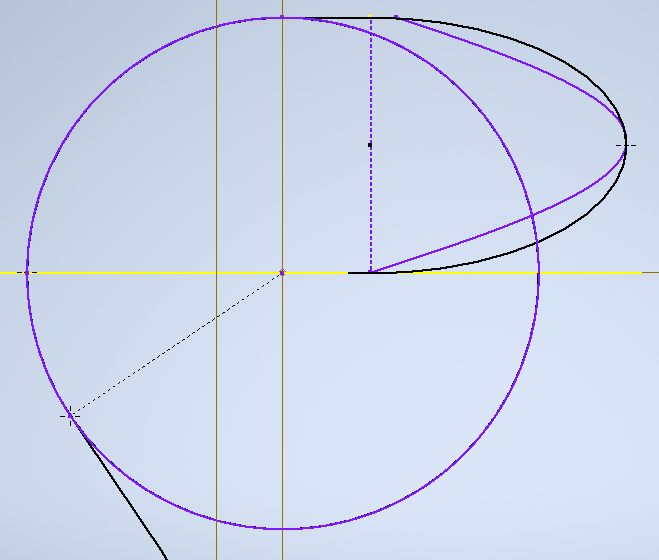 I used the following parameters for creating the third helix: 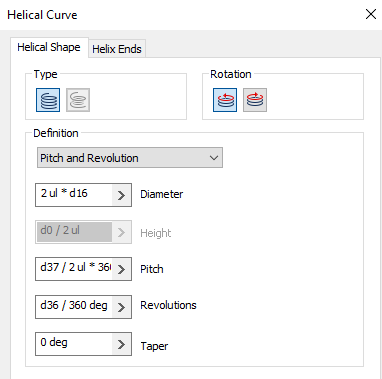 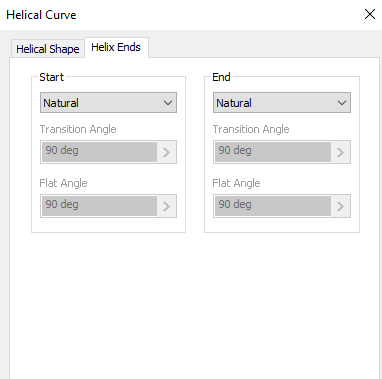 What is the proper way to model coiled pipes like this?

How do I fix the kink at the start and end of helix 3?

I stumbled on to another stack question then I stumbled onto a youtube video and it gave me some ideas on how to progress. and I wound up with an acceptable to me solution, but I am still not sure if there is a more practical solution/method.

I drew the front view in order to get that nice 35 radius arc, the tangent line, and the unrolled point of the helix. The methodology for unrolling the helix is valid. Just needed to determine 1/4 of the circumference of the helix's diameter. The first sketch looks as follows: 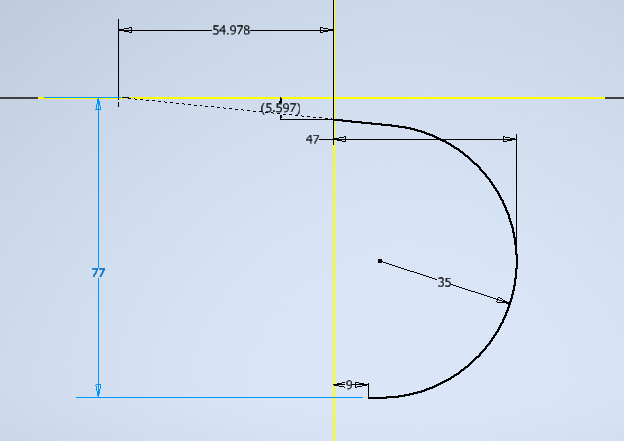 I then extruded the arc, and the tangent apparently (can't figure out how to limit the selection of joined lines), by the radius of the helix (and maybe a tad more to be on the safe side) to create a curved surface. The centerline has to be somewhere on this surface. 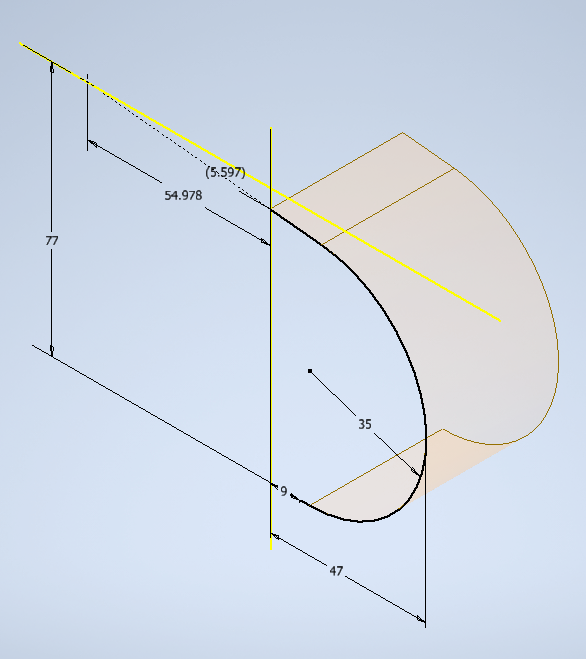 I then proceeded to make two helixes. The first in green going up from the 77 dimension, matching the parameters set in the drawing for diameter, turns and pitch. I then created a second helix (purple) going down from the 77 dimension and the start of the first helix. I based the pitch of the driving Y dimension where the tangent line from sketch 1 crossed the Y axis. Multiplied it by the inverse of the turn amount (4 in this case for the 1/4 turn). 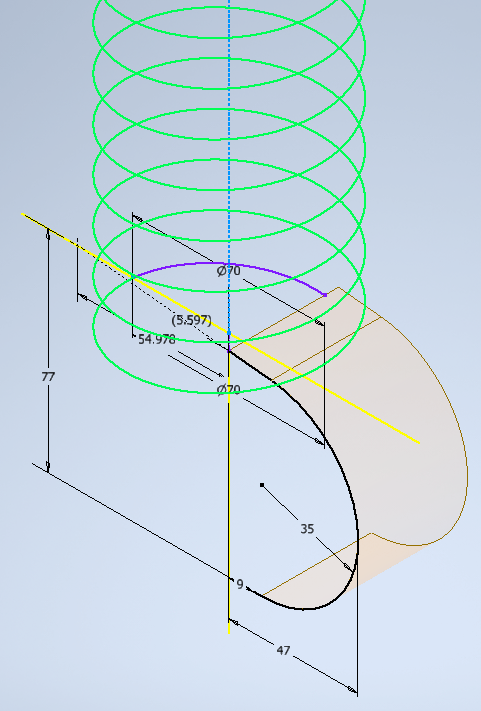 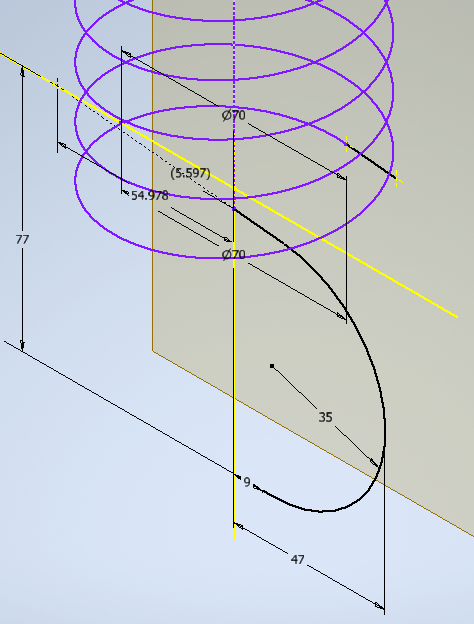 I knew I needed to connect from the end of the last tangent piece at the helix's edge to the bottom of the arc on the helix's centerline. I used a 3D sketch and drew a straight line (black) connecting these points. In the youtube video I watched they used an arc, but I was not sure how they came up with the radius for the arc. I then projected the straight line onto the arc's curved surface that was previous created and that resulted in a nice line (yellow) in my opinion. Not sure if its the right line though. 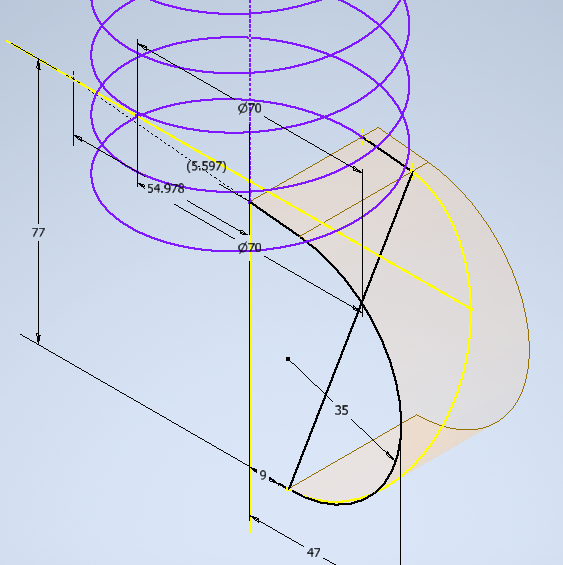 This is the right side view in my model 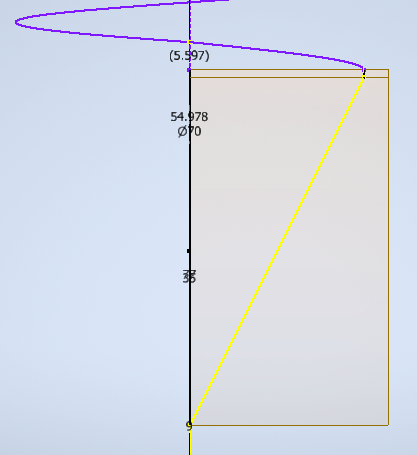 This also connected to the bottom arc tangent piece at centerline which was already drawn in sketch 1.

I then moved to the top of the helix. Here I made sketch 3 of the top view of the pipe runout (black lines). I did this at the dimension of the top pipe end which would simply my next step. Or at least I thought I had. Apparently I just projected the last 40 mm straight section to get the same end result. 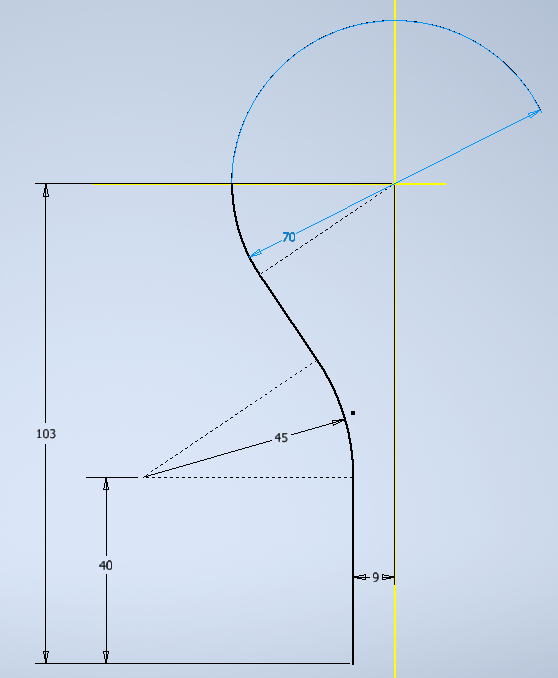 Looking at the front view of the drawing I see its a straight slope from the end of the helix to the start of the last 40 mm tangent line of the top pipe. My Eureka moment was realizing 3 points define a plane and crossing my fingers that I could project on to this plane. I created the plane by selecting the two ends of the 40 mm line and the last point on the helix. Attempt 1 was a failure as I decided to sketch on the plane and project geometry...while it did that, but it does it in the direction normal to the plane. NOT what I wanted. So I started a 3D sketch and tried to project sketch 3 on to a surface hoping the newly created plane would count as a surface. I got lucky and it worked! 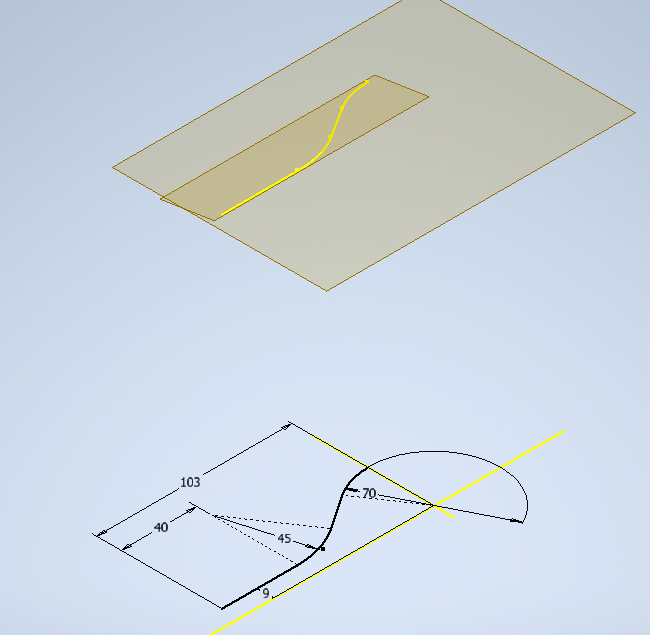 I created a plane normal to an axis at a point. I chose the 40 mm line and the end point of it. I then created sketch 4 on this plane and drew two circles. 10 mm diameter and then offset it 0.5 towards the middle. This gave me my pip cross section ready for extrusion. Sorry AutoCAD reference there where I would extrude along a path. For inventor it is SWEEP! 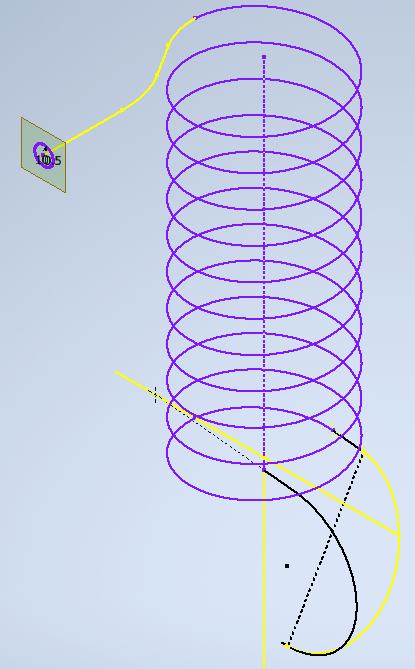 SWEEP!!!!! Sit back admire the final product and wonder if there was a better way to do it? 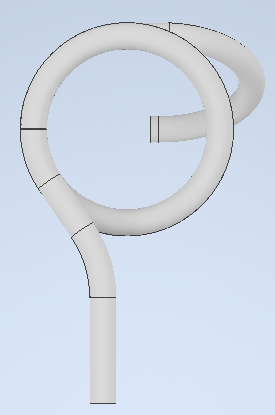 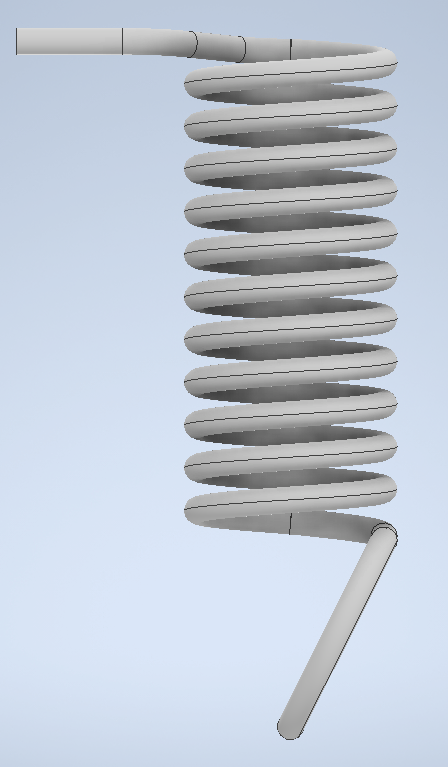 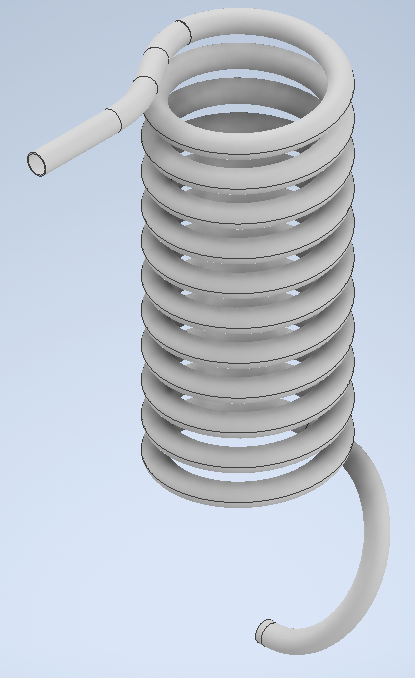 Not the answer you're looking for? Browse other questions tagged solidworks cad technical-drawing drafting autodesk-inventor or ask your own question.

2
Solidworks - Projected Curve is incomplete
1
Is there sufficient information to complete the bottom end?