How would one analytically calculate the maximum force a tube under transverse compression can withstand? I am specifically looking for a general equation to model the yield strength of a hollow tube being compressed on its sides between two platforms, given any values for its geometric and material properties (e.g. inner/outer diameter, length, yield stress, modulus of elasticity, etc.). I am particularly uncertain about where plastic deformation and/or fracturing would first occur, either at the points of contact with the plates or along the plane midway between the plates. I cannot calculate this using FEA as I need to include an analytical equation in an optimization code I'm writing. Any insight into how to analytically calculate this would be much appreciated. 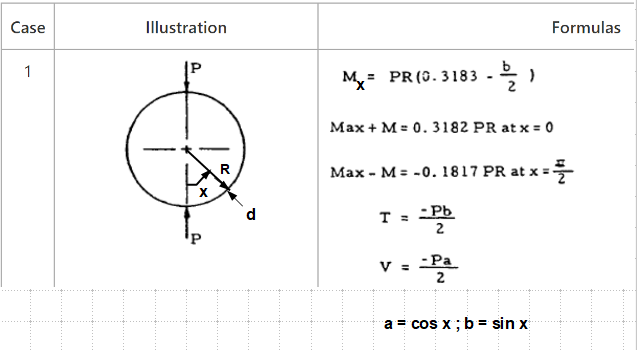 For a thick ring, you shall use formulas for "Arch Beam" to account for additional deformations. A good reference will be "Roark's Formulas for Stress and Strain" by Warren Young.

what I'd do is take advantage of the symmetry and investigate this as a curved beam.

I would say as a quick approximation it will fail by developing plastic hinges at the mid-distance between the two plates. That is because the contact lines along plates have the support of the plates.

The cylinder will deform to an ellipse, widening at free edges until develops plastic hinges.

Imagine a typical cross-section of the cylinder at point F, if it starts to flatten in competition with the section through the free midspan which wants to bend, its strain which will be trying to compress it at the contact point will be constrained by the friction of the supports and the section through free span will deform and develop a plastic hinge mechanism. This as well as a small widening of the cylinder will affect large deformations on the free midspan lines.

This is assuming the thickness of the cylinder is much less than its radius.

So that we don't have to worry about radial stresses.

Then the cylinder will act as two arc bridges connected on two rollers supports with the additional help of the two hinges plastic moments applied as a moment to the roller supports.

The thinner the thickness, t, the larger deformation before start of the collapse mechanism.

Not the answer you're looking for? Browse other questions tagged materials stresses strength mechanical-failure or ask your own question.

6
Strength of a Vertical Round Aluminum Tube with load cantilevered off it?
1
Can buckling failure at the first critical load be avoided by "instantaneous" loading?
2
What's the difference between critical load and yield stress, and failure in general?
0
Hollow Steel Tubing: Critical Load for Sidewall Buckling
0
How to determine the maximum internal stress for a material under compression before brittle failure?
0
Instron Test Profile -- Failure when steadily dropping the load
0
compression buckling under lateral load