Modeling the Internal Forces Exerted on a Catapult Arm while Throwing

I am currently creating a MATLAB script to determine the internal forces present in a uniform beam as it is accelerated by a torsional spring. I was able to derive the equation for the axial force present in the beam, but I am not sure how to determine the shear force of bending moment at any time. My setup is approximated by this image: 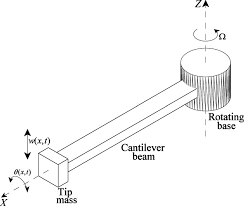 My intuition tells me that there should be a nonlinear shear force across the radius of the beam, with the largest shear occurring near the rotational axis. I believe the bending moment should follow a similar distribution.

I was able to simulate the dynamics of the system, so I know the angular velocity, acceleration, and spring force at any point, but I am not sure how to translate this to the shear and moment. I attempted an integral of the force required to accelerate each point of the beam, but I don't believe that my result is accurate. If I could see the derivation process to determine the shear and moment distributions, that would be invaluable. Thank you!

If the beam is rigid (deformation is small and negligible) and is rigidly attached to the cylinder, the rotation does not affect the responses of shear and moment, as the center of mass/force remains constant. Therefore, the same as a cantilever beam, the shear is linear throughout the beam; the moment is zero at the tip and is the maximum at the support.

2
How to describe the rotation of opposite ends of a body due to an applied moment
2
Failure due to shear stress on rod lip?
5
Shear Force Diagram of a Simply Supported Beam with triangular load distribution
4
Torsion and Bending stress calculated from deflection
1
Finding Safety Factor for Plastic Snap Fit Cantilever
0
Stresses due to combined loadings in a bent shaft supported at both ends
1
Horizontal "pinching" force of an arch with applied moment
0
Timoshenko Fixed Fixed Total Beam Deflection