The formulas for hydraulics and electricity are generally the same (theoretically), or for any type of flow. Air, water, hydraulic fluid, electrons... As shown on this website, a "hydraulic resistor" has a pressure drop across it equal to the supplied pressure from the pump. If two "hydraulic resistors" are connected in series, and they both have the same resistance to flow, will the pressure drop across each be half of the pressure from the pump? 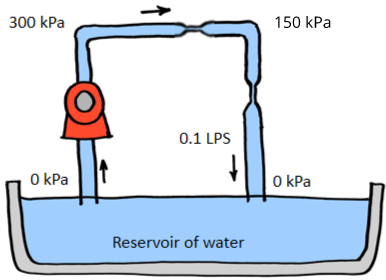 Solar Mike gave an answer that was very adamant that this is wrong. I am only interested in objectivity and what is right, but would be good to have some kind of proof provided as well. Otherwise anyone can claim something to be right, even when it is not. I will now eleborate on what I still think seems to be the case:

In Poiseuille's Law, if the resistance R doubles, the flow rate is cut in half. The resistance doubles if the radius decreases by 15%. Adding resistors in series, adds the resistances. To denote the resistance of each resistor, we can use R. The flow rate across the first resistor, is dependent on 2R. The pressure required to get the same flow across the second resistor, is half. If all pressure is converted to flow rate, and falls to zero at the end, it seems like this would cause a 50% pressure drop across the first resistor. This is also shown in another example I saw online, http://hyperphysics.phy-astr.gsu.edu/hbase/electric/watcir2.html, as mentioned in comment to Solar Mike.

With laminar flow (and some other assumptions like fully developed flow, everything at equilibrium, newtonian fluids, and uniform viscosity throughout the system), then Poiseuille's law applies and systems where the significant pressure drops come from straight tube geometry can be analyzed like electrical networks.

"Resistance" then means pressure_drop / flow, for a straight segment with uniform diameter. That "R" is proportional to the tube's Length/Diameter^4.

2
Linear force multiplication (or division) without hydraulics
0
Hydraulic pump choice - which produces most force
1
Can hydraulics be used with a squarish piston?
1
Hydraulic system dynamics modelling
1
Low maintenance device to trade flow rate for lift height?
0
will a hydraulic gear pump be capable of the same pressure at all speeds?