I was trying to imagine materials undergoing collisions, and thought about materials that do not deform at all. Naturally this is an idealization that does not exist in reality but, if it did, I think it would be a material with infinite stiffness.

I wanted to imagine a material so stiff that its collisions had to be totally destructive or would defy conservation of momentum. If a material is infinitely stiff, then the collision is instantaneous and has an infinite impulse. In any case, these are all idealizations.

IMHO there is an "misuse" of the words brittle/strong/stiff that the OP is using.

My interpretation of brittle has to do with sudden failure during testing with little to none plastic deformation. (This usually --but not necessarily-- follows a linear region). In this sense the opposite of brittle is ductile.

Additionally in the context of impact engineering, a distinction between strong and tough is required. Strong is usually defined by Ultimate Tensile Strength (UTS) and its usually measured in MPa. Tough is measured with impact toughness or fracture toughness, and the measure is related to energy (not stress).

In that sense, you can have a material that its strong but not tough, or tough but not strong. Following I have a matrix with toughness and strength and examples (in the parentheses are edible materials just because I am a glutton).

So to sum up, usually brittle materials are materials with high strength and low toughness.

Finally the stiffness is also conceptually an entirely different (although there is strong correlation with strength). More specifically, stiffness has to do with resistance to deformation. The property that measures stiffness is the modulus of elasticity aka Young's modulus, and its also measure in MPa (like strength).

These are some great questions to get started thinking about the field of material science!

Most of these properties are imao explained very well by looking at a Stress vs strain graph of a material test. First however a quick primer on stress and strain: In material science we are trying to determine how materials behave regardless of their shape, but obviously a beefier part made of a similar material will be stronger right? The typical way we get around this fact is to take the amount of force and divide it by the size of the part. This results in the units for force being converted into units of pressure (force over a given surface area). Similarly the units for deflection (how much the part compresses, stretches, or bends) are measured by percentage. Imagine two lengths of rope under the same tension; the longer one will stretch more based on how much longer it is than the short one. Therefore strain is measured as a percentage of the stretch (or compression) versus the starting length.

Now let's start with a simplified graph of Stress vs Strain (force vs stretching) of a metal rod being pulled in half (real world is more complicated as usual): 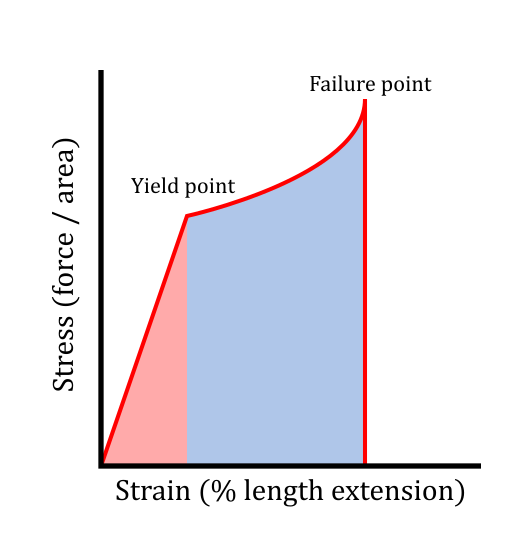 Going from left to right, most materials will start out with an elastic region which is where the material can stretch but when released it will rebound. The slope of the line in this region directly relates to how stiff a material is (how hard you have to push in order to deform it). Sometimes words like stiffness and strength are used interchangeably, but in engineering "stiffness" should only refer to how hard you have to push to get a given amount of deflection.

Once you push a material too far it may begin to permanently deform which marks the "Yield point": the point where if you deform further the material will not rebound all the way when the force is released. The exact shape of the curve beyond the yield point depends on lots of things (actually even elasticity isn't always linear in reality), but in metals at least as they stretch beyond their elastic region they will get a bit stronger until they break (failure point).

Before we move on, I want to point out that the last sentence mentioned the word "strength". Unlike stiffness, "strength" refers to only the stress (and not the stress divided by the deflection) at certain critical points in the graph. The first such point is the yield point which is the force at which we start permanently deforming the material, and the second is the failure point which is the maximum force before the material breaks (and force goes back to zero).

In physics recall that if you apply a force over a given distance that can be defined as a total energy. Therefore the area under the graph in the elastic region (shaded in pink) is the total elastic energy you can store in the material. If you also add the light blue section you get the total energy required to break the material. When we're talking about very stiff materials (high slope of elastic region) the width of this triangle is usually rather small, which means it doesn't take much energy to exceed the elastic region. It might still require a large amount of force to exceed that elastic region however so it could still be considered "strong", but if it breaks shortly after getting past the elastic region that's still not much energy. Tough materials on the other hand typically deform a lot before breaking, and that width gives them lots of area under the graph meaning a lot of energy input is required to break them.

yes, stiff but not tough, or strong.

Brittleness describes the property of a material that fractures when subjected to stress but has a little tendency to deform before rupture. Brittle materials are characterized by little deformation, poor capacity to resist impact and vibration of load, high compressive strength, and low tensile strength. Most of inorganic non-metallic materials are brittle materials.

Not the answer you're looking for? Browse other questions tagged materials strength stiffness or ask your own question.

4
What is the strongest known *metallic* material which can be used on Earth?
5
Do all ductile materials experience necking before fracture?
2
Can we make engineering grade paper mache by improving on the paper?
1
What is the longest lasting modern building material?
0
Need advice: Estimating the compressive yield strength of abdominal tissues from the data of its rigidity or stiffness constant
0
Material for car mounted fire extinguisher bracket
1
Looking for thin flexible and strong material
0
Should the stiffness of this cantilever beam be different for these two conditions?