I know that efficiency depends on compression ratio(CR), NA engines always has higher CR than turbos,so how turbo engine can have better efficiency? 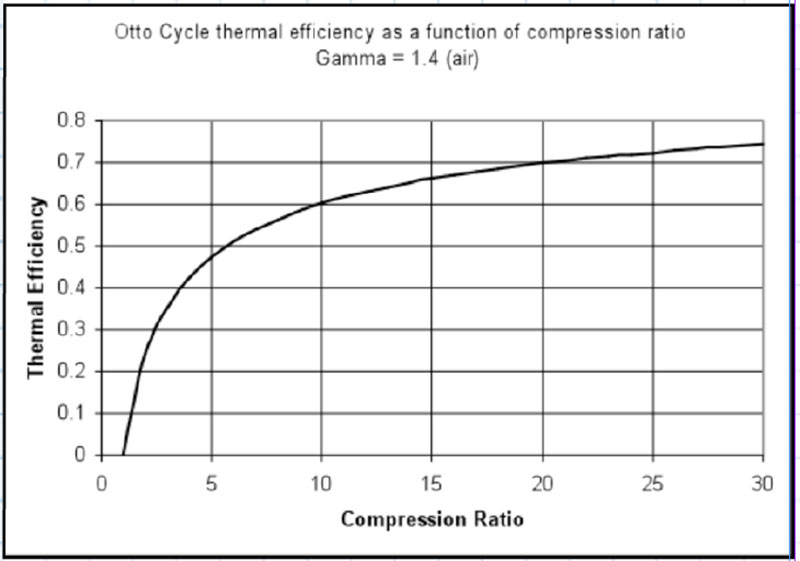 However, the basic idea of a turbocharger is to force more air into an engine. With a traditional ICE, air can only be drawn in up to atmospheric pressure (1 atmosphere = 1 bar absolute). The turbocharger increases the pressure that comes inside the volume, so effectively you get more fuel inside the chamber, as a result you have more power per stroke.

So there is more power in turbo engines, however, I don't think that efficiency (in the sense of fuel economy) is necessarily better in turbo-charged engines. To my understanding car manufactures downsize the engine displacement and add a turbocharger which has the same power and 10-30% more fuel economy.

The reason for the increased fuel efficiency is that in the same volume you can get more fuel, and therefore the thermal density is greater. That means that during combustion there is higher temperature achieved, so essentially the thermal efficiency is better. Additionally, due to the more thermal energy per stroke, waste energy is recovered in the exhaust and feeding it back into the engine intake. By using this otherwise wasted energy to increase the temperature of air, it becomes easier to ensure that all fuel is burned before being vented at the start of the exhaust stage.

Efficiency is improved but it isn't obvious from the equations 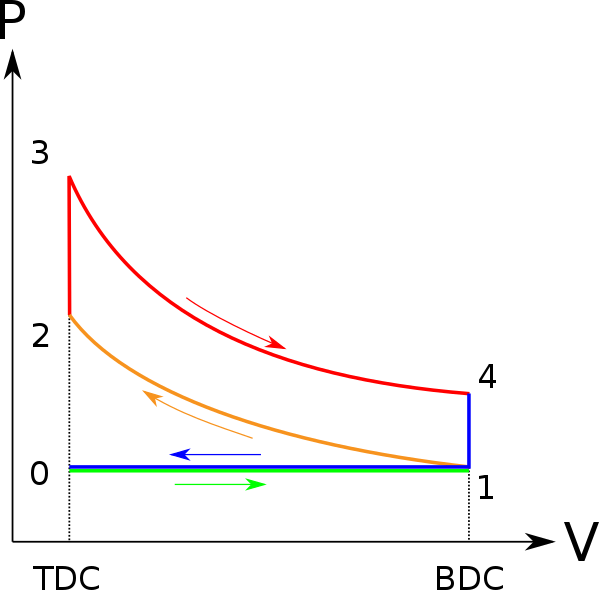 Wiki also shows the derivation of the Otto efficiency using the above diagram. That is the source of your original diagram.

Turbochargers increase the power of an engine because spark-ignition engines have power relative to the amount of air we can get into the cylinder. More air = more power.

Adding a turbocharger to the process changes the diagram, but not in obvious ways. P1 is increased, but P2 may not be since we have a max pressure to prevent excessive detonation (knock). The ideal Otto diagram isn't a good place to analyze this. The turbo air charge is also often cooled to allow more mass flow into the cylinder, which means there is heat loss from the system during O-1, further complicating the issue. All this means that we can't use the derivation of efficiency used to produce your graph.

That said, we know empirically that turbocharged engines are more efficient. The key reasons for this are:

This is not true. Sometimes the exact same engine is fitted to different cars, some with a turbo some without. The particular example I am thinking of is a Diesel, however.

Adding a turbo to an existing engine will increase its power and efficiency. We know this to be true empirically, because otherwise why would anyone bother? Increase in power occurs because we get more air into the engine. Getting more power from an engine while keeping friction the same clearly means better efficiency.

Another source of increase in efficiency (in fact, theoretically the main one) occurs because in most engines, the exhaust pressure is higher than the inlet pressure (as a result of the same mass of gas being trapped in a cylinder at higher temperature) hence there is pressure that would be otherwise wasted, and this can be used in a turbo to compress the air going into the engine. More pressure in the inlet stroke means more power in the power stroke.

I say "most engines", because there is another way round this issue - the Atkinson cycle. In Atkinson cycle engines the inlet valve is deliberately closed late, allowing some of the inlet mixture to exit the engine. This gives a (comparitively) shorter compression stroke and a long power stroke, meaning the exhaust pressure is fully used. The "compression ratio" for compression on an Atkinson engine can be made the same as a "typical" engine while the power stroke has a longer compression ratio. The result is that Atkinson cycle engines have no excess pressure in the exhaust stroke and do not benefit from turbochargers (in fact they have no excess pressure to drive a turbocharger.)

Now, as I mentioned, sometimees the exact same engine is fitted to different cars, some with a turbo some without. But the only example I could think of was Diesel. There's a reason for this. Having too much pressure in a gasoline engine causes premature ignition. An engine that's designed to be used with a turbocharger doesn't necessarily need the same compression ratio to achieve the same efficiency, because the turbocharger takes care of that. In fact, the compression ratio may need to be deliberately reduced in order to prevent premature ignition (known as "knocking"). You still end up with an engine with better power/weight ratio, which will help with overall vehicle efficiency.

You have to make the cylinder walls out of something, and steel is the normal choice. Steel conducts heat. Some of that heat conduction is essential to stop the engine from melting. There is a trade-off between how hot you can run an engine - hotter being more efficient all else being equal - and how much heat you have to dump through the cylinder walls to let you operate at that peak temperature. Dumping heat through the walls lowers efficiency.

For a normally aspirated mid compression engine, about 30 percent of the heat is transferred to the coolant. Most of this is a dead loss to efficiency, and the thing to realize is that much of it is a function of the reciprocating engine's basic layout. A lot of the heat runs down the cylinder wall from the head to the skirt. This heat flow is lossy because the cylinder pressure is lower further down the cylinder. There are engines that are made to very carefully control the heat flow at very constant loads. But for a versatile engine, the design will move a lot more heat down the cylinder wall than is necessary most of the time.

Not all turbos increase engine efficiency, but the ones that do so work by reducing the heat loss from the iron to the coolant. Let's say you have a n.a. 10:1 compression ratio iron block and the cylinder is square - 3" dia and 3" stroke. If you turbo the thing so that you only need 7:1 to get the same peak temp and pressure, you can shorten the stroke and shorten the cylinder liner. The cylinder operates at a higher average temp because the bottom temp is higher, and the heat flow down the cylinder is greatly reduced even though the heat flow across the cylinder into the coolant is the same keeping the peak temp the same. It turns out that the turbo system can be designed to lose less heat than you save in the sleeves. A full-on efficiency turbo on a near-constant load application such as a big genset can reduce direct and coolant heat losses by about 2 percent. They can also slightly reduce the heat loss from the exhaust.

So for a normally aspirated engine, the thermal breakdown might be 33% exhaust, 33% coolant and air loss, and 34% work. The turbo version might be 32% exhaust, 31% coolant, and 37% work if the block is reworked but the peak conditions are the same. It's easier cost-wise to justify this on diesels.

One other comment. In boats, the prop power absorption curve goes as rpm^3. So when cruising at part throttle, the engine is running at very low pressures. A turbo can help match the torque and power curve of the engine to the shape of these propeller load curves and improve cruise efficiency by better matching engine performance at cruise while still providing the same peak power.

Historically, turboexpanders were invented for efficiency. They converted supersonic exhaust streams from aircraft piston engines to slower, quieter conditions and shafted the power over to the prop shaft. The efficiency bump really comes from the expansion side of the turbocharger. Using the power to drive a charging turbine is one option, and it really doesn't have much of an efficiency impact.

Not the answer you're looking for? Browse other questions tagged mechanical-engineering motors energy-efficiency or ask your own question.

9
Why do some diesel engines run on diesel fuel and others on fuel oil?
9
How can "mpg" be high under low engine load?
7
Are smaller heat-pumps more efficient?
3
Can combined cycle turbines be small enough for trains?
2
What are the limiting factors on diesel engine compression ratios?
3
Efficiency and NOx emission of lean burn gas engines
0
4-stroke vs. 2-stroke rpm
4
In a diesel engine, does more heat leave the engine through the tailpipe or the radiator?
0
How do you optimize an engine for a farm tractor?