Should we use Hooke's Law (that linearly relates stresses to strains) if the stiffness of body is changing during deformation?

Assume I have a slender cantilever beam, fixed at one end and force applied on the other. Now, during the deformation, we know that the beam's stiffness is going to change and the force-displacement response is not going to be linear. In this case, Large Strain theory is works.

On the other hand, if I have a very short and thick cantilever beam fixed at one end and force applied on the other, so during the deformation, it can be assumed that the beam's stiffness is somewhat constant and so is displacement reponse to force (Ofcourse, if I don't increase the force to astronomical levels). Here, Small Strain Theory works.

P.S: Assume the body doesn't encounter any plasticity at all

It seems to me that you are confusing the macro behavior of the structure (Large displacement) with the microscopic behaviour of the material (generalised Hooke's law).

Whether or not you can use Hooke's law is depended only upon if the material is with a range of strains/stresses that the relation between stress and strain is proportional. Different material have different ranges of strain that this applies.

For example, you might use a hyperelastic material for a beam that does not exhibit this linearity between Stress and strain even at small strains. 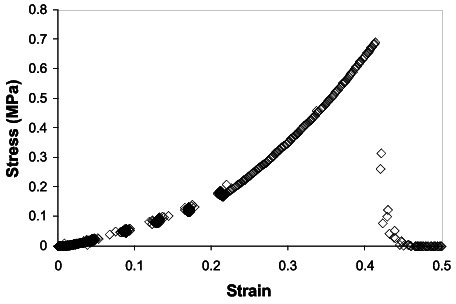 so IMHO, the answer to you question is that it depends on the material you are using. In the majority of cases (i.e. for the most common engineering structural materials, under strains not in the placticity region), yes you can. But that is not always the case.

A simple example is your cantilever beam stressed beyond hooks law into elastic-plastic range.

where may be part of the section near the neutral axis is still in the elastic range but the top and bottom are in the plastic range.

Of course, we can not use the hooks law here.

Not the answer you're looking for? Browse other questions tagged mechanical-engineering structures solid-mechanics or ask your own question.

1
Difference between Stiffness (K) and Modulus of Elasticity (E)?

4
How to Compute Total Strength of Composite Tensile Bars
2
Calculate maximum acceleration of a car from rest (optimum launch)
1
Which material index should be maximized for a component in a Car's manual type HVAC?
1
Calculate the residual stresses in the bars and the residual displacement of the $ C $ point when the $ P $ force is removed
3
What exactly is Hooke's law defined for?
0
Would poisson's ratio also result in stresses in lateral directions?
0
Does the Superposition principle actually make sense in reality for a rod subjected to bending and axial force togehter?
2
Is bending moment along a beam independent of the cross sectional area of the beam?