Are these two shear stresses supposed to occur at the same location or different?

The Mohr circle is a tool that helps visualize the stress state in a location in the structure. The way I interpret it is that each point in the Mohr circle represents the stresses at a rotated coordinate system. (For the 2D case) in two of the orientations (the principal directions), there is no shear stress, while in the 45 degrees to those planes the maximum shear stress is observed (with non zero normal stresses in the general case).

At any other point above and below the neutral axis, the maximum shear stress obtained by the Mohr's circle is different to the shear stress calculated by the $\frac{VQ}{It}$ equation. (I would hazard a guess that the maximum shear stress as obtained by the Mohr's circle is maximum at the furthest points from the neutral axis and their magnitude is greater than $\frac{3V}{2A}$, because yielding and failure usually initiates at the edges of the cross-section.)

$f = \dfrac {VQ}{Ib}$ is the "shear flow" in the flexural beam element caused by the applied load, and its intensity varies along the beam as the internal shear force $V$ varies. 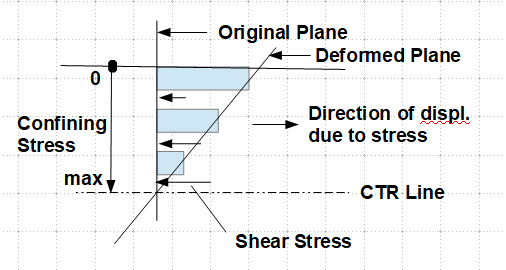 Mohr's Circle is used to find the stresses on an inclined plane of an axially loaded member as depicted below:

So, "No", the two types of shear stress (due to flexural and due to axial load) are completely different matters.

Not the answer you're looking for? Browse other questions tagged mechanical-engineering solid-mechanics shear or ask your own question.

3
Strength of Welded Joints
2
What is the difference "maximum" shear stress and shear stress
1
Locations of max stresses in a circular beam?
0
Flange nut design
3
Difference between shear flow and shear stress
0
Does the Superposition principle actually make sense in reality for a rod subjected to bending and axial force togehter?
1
Design procedure used in beam design
1
Maximum shear in a beam
0
Confusion with the definition of Principal Stress