I am trying to measure the strain on a part using a strain gauge. The gauge is a 120 $\Omega$ strain gauge from HBM. I am using National Instruments (NI) hardware and LabVIEW software to capture the strain measurements. The gauge is connected to a cDAQ 9237 using a NI 9944 bridge. The software has been tested previously and it worked, but I think there is some problem with the hardware. Once the gauge is connected to the bridge and a current runs through it,I can only read a flat curve at 0.025 V, which translates to aproximately 5% strain.

But if I instead unplug the strain gauge from the bridge, there is a measured noise, which suggests that a current runs through the bridge and in turn is measurable. I think there is a problem in either the calibration or the gauge itself. No matter how much I compress the material, there is no change in the measured current, it remains flat. Ideally the current would change once the material is exposed to a strain. My question is if anyone has encountered anything similar and or know how to make it work?

Edit: When I try to calibrate the strain gauge, I recieve the following error code: 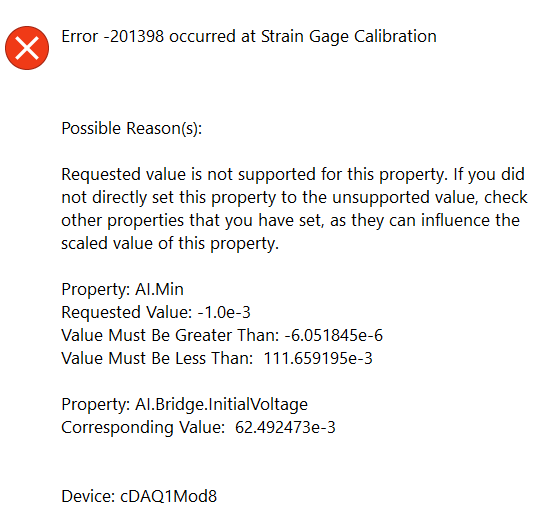 Regarding the configuration, I use the following quarter bridge setup:

The strain is measured over R4.

Browse other questions tagged mechanical-engineering solid-mechanics software or ask your own question.

1
How can I deliver a measured amount of liquids through a tube?
0
Using strain energy to calculate deflection
1
Does same stress always produce same strain?
0
Measuring wire damage using strain gauges
2
Compressional Strain Definition
0
How to configure strain gauges for tension measurement?
5
What is "per unit strain"?