Is bending moment along a beam independent of the cross sectional area of the beam?

We know this that if the a cantilever beam (of any cross section) is fixed at one end and a transverse force is applied on the other, then it will bend. However, we just casually assume that the moment only depends on the type of transverse loading applied on it and the distance from the loading to the support, while drawing a bending moment diagram.

I couldn't understand if this is actually the case in reality or not? I mean shouldn't the bending moment have some dependence on the cross sectional area of the beam as well? Since the change in cross sectional area would mean that the moment of inertia has changed, and hence the stiffness of the beam has changed. Should the bending moment at the same distance from the fixed support end also change or not?

You seem to be mixing up a few concepts.

In these cases, one must also use compatibility equations, which basically ensure that the beam behaves appropriately (no deflection or rotation discontinuities, etc). However, these equations are a function of the structure's stiffness $EI$ (or $EA$ for axial loads), with stiffer elements "pulling" more of the load.

However, you were thinking about the effect of a beam's deflection on the bending moment.

For this, there is a simple answer and a complicated one:

So the simple answer is: who cares? Even if there's an effect, it's so insignificant we can just ignore it.

Now for the more complicated answer: yes, deflections and rotations most certainly do influence bending moments. Indeed, as stated above, that effect is usually insignificant, but "usually" just ain't good enough for safety.

For a classical example, just look at column buckling. That is, the fact that very slender columns under axial load will "collapse" under loads far below their crushing load. For a visual cue, think of holding a straw or piece of spaghetti between your fingers and pressing down. Under barely any load the straw bends in the middle. That's buckling.

Why does buckling occur? Because deflections and rotations impact bending moments.

Basically, imagine you have a perfectly straight column with a compressive load that's perfectly vertical and perfectly centered along the column's axis. If you were to do a bending moment calculation, you'd see that the column is under zero bending moment, as expected.

But let's keep this simple and assume that the column is still perfectly straight and the load is still perfectly vertical, but it's not perfectly aligned with the axis. It is just an infinitesimal distance $\delta$ off the axis. A value so small it's almost non-existent. Almost, but not quite.

For properly designed columns, this process will eventually converge to a stable value for $\delta$ and therefore for the bending moment, and everything is fine. If the column is too slender, however, the process diverges and $\delta$ quickly goes to infinity. Or, in real-world terms, the column buckles.

This is a classic example where yes, the beam's stiffness and deflection have a significant impact on the bending moment. But the simple answer of "they don't" will serve you well 99% of the time.

A bending moment is an external moment that does not have anything to do with the section or material properties.

Let's say we have a concentrated load applied at the center of a simply supported beam.

The moment is the same for both.

Of course, the same moment will create drastically different stresses in that two beams. That is where the engineer calculates the stresses and deflections to verify the section is suitable.

Yes, the load is independent of the cross-section of a structure in the example you are quoting and for most cases that an engineer would meet ( wasabi had the patience to write a detailed and more complete answer than my dumbed down version- hopefully his effort and thoroughness will be appreciated) .

If the cross-section is not enough the the structure will fail. It is the engineer's job to select an adequate and economic structure.

In the example of the cantilever beam loaded at the free end), then if the structure doesn't fail and it remains in the small displacement then internal forces and moments develop to resist the load.

Those internal loads are independent of the cross-section.

On the other hand (and that is probably confusing the author of the OP), is that the magnitude of those internal loads (bending moments, shear forces, axial forces) AND the cross-section determines the stresses inside the structure.

The end result is that when you apply a load on a structure you either need:

A moment can be thought as the work energy produced by a force - $F*L$. The energy can be stored on any structural element of any size but, due to the requirement of structural equilibrium, it will cause larger internal stress on a smaller element, and smaller stress on a larger element (see case 1 on the sketch below), so $\sum M$ always equals to zero for any case.

However, If we hold the stress constant, then the larger element will then experience a larger moment due to the fact that $M = f_b*S_X$, and is said to have a larger "Moment Capacity". 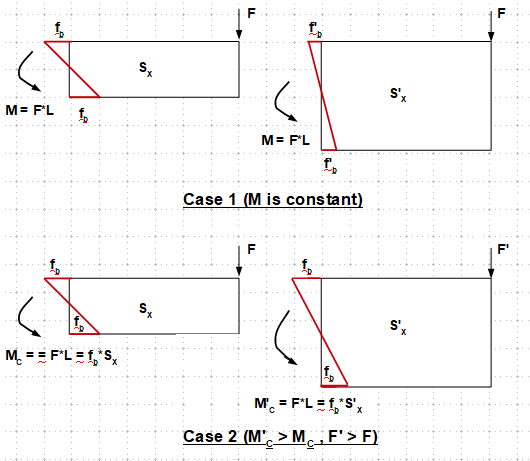 Not the answer you're looking for? Browse other questions tagged beam solid-mechanics moments bending or ask your own question.

4
How does stiffness/rigidity affect the bending moment of a beam
3
Failure in Hollow, Thin Beam due to Collapse of Cross Section
1
Shear and Bending Moment
0
Does the Superposition principle actually make sense in reality for a rod subjected to bending and axial force togehter?
0
Beam with width tending to zero
0
How will the reaction moment on the support be distributed in terms of forces in this model?
0
Should the stiffness of this cantilever beam be different for these two conditions?
0
Rigidity and bending moment