Why does the torque of an internal combustion engine increase with its rpm at low rpm range?

Ask Question
Asked 1 month ago
Active 1 month ago
Viewed 82 times
3
$\begingroup$
This question was migrated from Physics Stack Exchange because it can be answered on Engineering Stack Exchange. Migrated last month.

Here is a simple schematic of the engine. 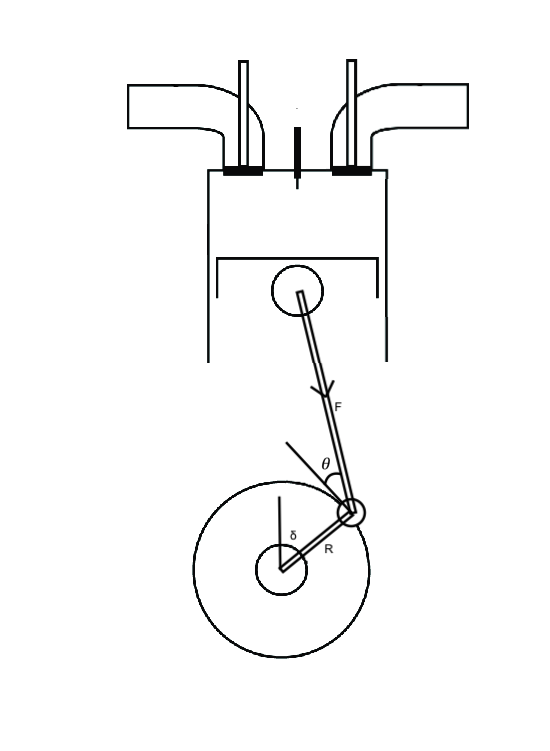 Now, let's see what happens when the angular velocity (ω) of the crankshaft is doubled.
Any force F specific for an angle 𝛿 would then act on the crankshaft for only half the period of time (i.e., dt for each angle 𝛿 gets halved). As a result, the increment in angular momentum of the crankshaft in one complete cycle gets halved. However, since the time period of each cycle has halved as well, the torque generated by the engine should theoretically be the same regardless of the rpm of the engine. This would result in the following torque-rpm graph.

However, we know that this is not the case. The actual graph looks something like this.

The dip in torque is easy to explain as with increasing rpm one can expect several losses to increase such as frictional losses, pumping losses, inefficient charge mixing, decreased time for efficient combustion etc. But my question is, what explains the increase in torque with angular velocity at the low rpm range?

Your assumption that the force acting on the crankshaft for a given crank angle $δ$ is constant regardless of the rpm of the engine is false.

A primary reason why this is the case is, unlike what we generally assume, the intake and exhaust valves don't open or close exactly at TDC (top dead center) or BDC (bottom dead center). The timing of the opening and closing of the two valves is tuned according to the requirements of an engine as @Niels said earlier. Consequently, an engine will produce the maximum torque only at a certain rpm.

Here is a graph depicting the above idea.

Conventional engines don't have variable valve timing, i.e., like other valve timings their IVCT is fixed as well. The engine's IVCT is consequently optimal for only a single value of rpm––the optimal rpm.

This is because the valve timing is optimized for a certain RPM, which represents the design point of the engine. In the case of a piston engine for use in an airplane, the opening and closing of the intake and exhaust valves is timed for optimum performance (i.e., maximum work extracted from the combustion process) at 2400-2600 RPM, while on a Suzuki GS1000 motorcycle engine it is instead set to accomodate 10,000 to 12,000 RPM.

In addition to the volumetric efficiency of the valve timing system, there are some harsh losses associated with thermal losses. The top of the cylinder is hotter than the bottom end, and heat transfers down the cylinder liner at a rate that doesn't depend on rpm. So more heat is wasted per stroke (which is a poor way of saying it) when the engine is running slowly.

4
Can I control latent/sensible heat changes in a counter-flow, induced draft cooling tower using climate?
4
If I need a very small heat engine, should I consider external combustion?
2
Does a tank of liquid nitrogen increase in total internal energy after emptying?
0
Why does combustion happen at constant pressure in jet engines?
4
Time-rate of change of P and T in a pressurized rigid volume with a hole in it
16
Why does temperature not increase by putting more logs into the fire