Ask Question
Asked 2 months ago
Active 2 months ago
Viewed 111 times
1
$\begingroup$
Closed. This question needs to be more focused. It is not currently accepting answers.

I am practicing with Inventor LT 2021 to get used to it, and learn more about how to manipulate things in it. I was practicing with the following sketch and I developed a bunch of questions about the sketch. 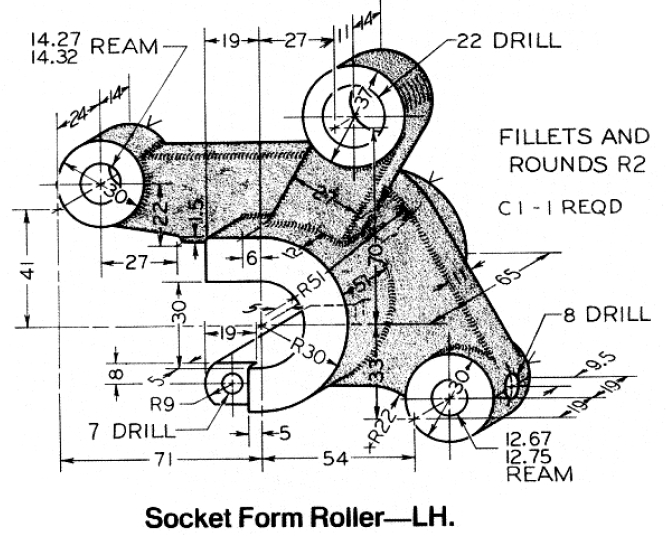 I can see the thickness of the main plate is 11 (noted just to the left of the overall 65 dimension for depth).

I know if I was in an office I would go ask the engineer/designer/client for clarifications, but since this is just a practice sketch from an PDF online I don't have the source to ask.

This is what I have so far: 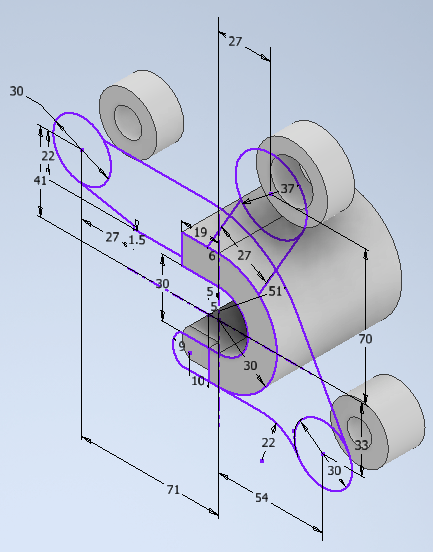 For those wondering why I have not accepted my previous question, I am planning to as soon as I work my way back to that question and try it again with some of the new techniques I have learned by stepping back by more than a few examples.

I'm answering your direct questions in this post, and will follow up with a how-to-model as a separate answer.

I'm modelling this in SolidWorks, because it's what I have installed on this PC. Everything should be transferrable to Inventor, but ask if you have any questions.

Step 1 - create the central core. N.B. the '8mm' here is a driven dimension. The drawing shows 8, not 8.0, thus I'm inclined to thing the marked 8mm is a rounding error. Placing the hole concentric with the centre of the R9 makes much more sense, and would still give 8mm on the drawing for that dimension if set to 0DP. 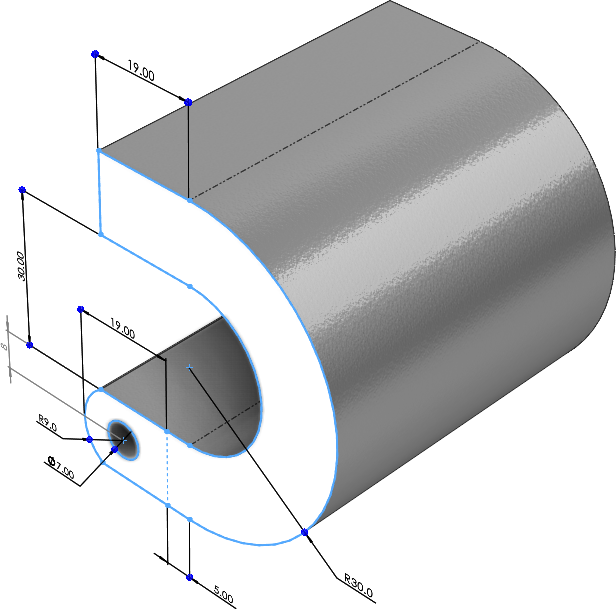 Step 2 - Create the Circles. I say create these next, since they are the functional geometry. The webs/joints between them are driven by these. If the design were to change, you want the webs to be late in the tree. Note the reamed diameter has an equation =(9/16)*25.4) to accommodate the inches problem. I have sketched on the front plane, and defined the 24mm offset starting position for the extrusion in the extrude feature. Having all the sketches on one plane will make the webs a bit easier to define, without as much 'projected geometry'. 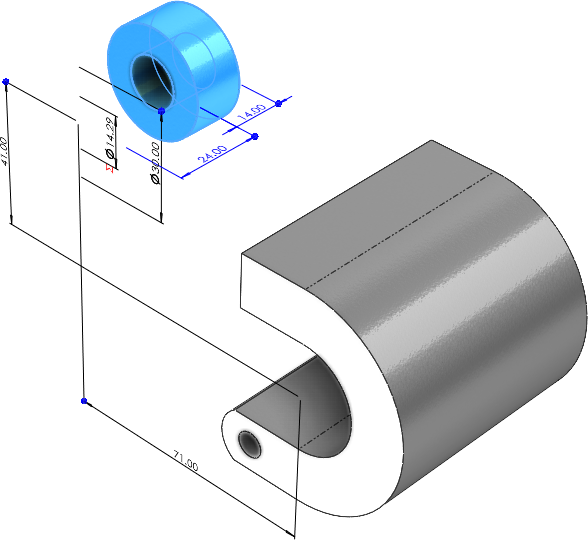 Repeat Step 2 for the other two circles.

Step 4 - Cut the 8mm hole in the bottom right cylinder. In order to avoid creating extra reference planes that aren't needed, I sketched this on the Right Plane, and defined the cut to start 'from vertex', picking up the centrepoint of the sketch which defined the cylinder, and then 'up to next'. This will dynamically rebuild to be cutting from the right place, to the right distance, regardless of how the model changes. 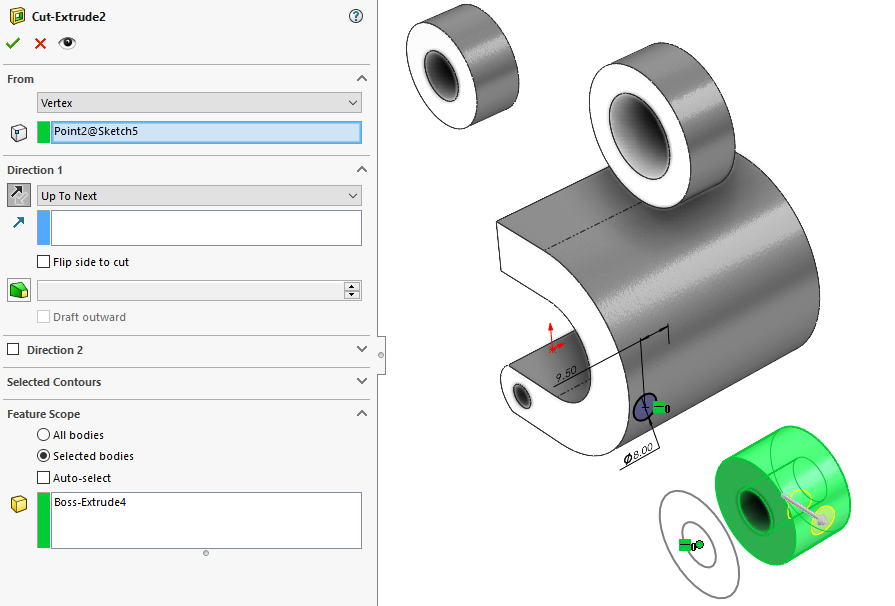 Step 5 - Extrude the 'arm'. This is defined by literally three dimensions, and the implied tangency and collinearity stuff that I mentioned in the other answer. 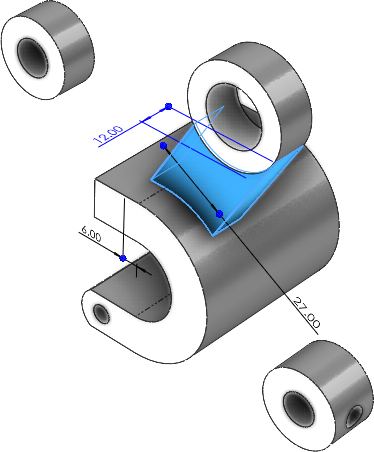 Step 6 - Extrude the main plate. Note that the R51 is not concentric with the central core... This is defined as 11mm, starting from the back of the arm. 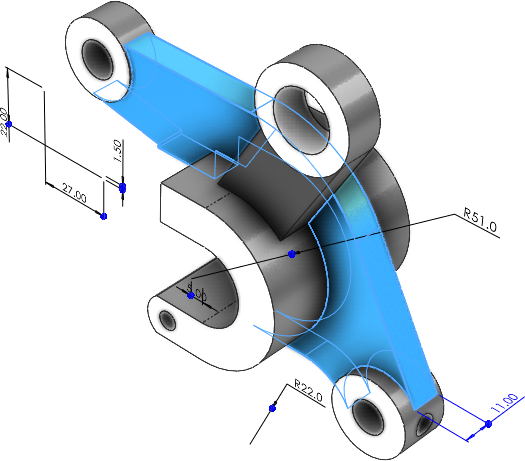 Step 7 - Add fillets. I had to do this in a few steps in order to get the best looking fillets - order of operations matters. This is a whole 'nother topic/answer in and of itself, so I'm not going into it here... 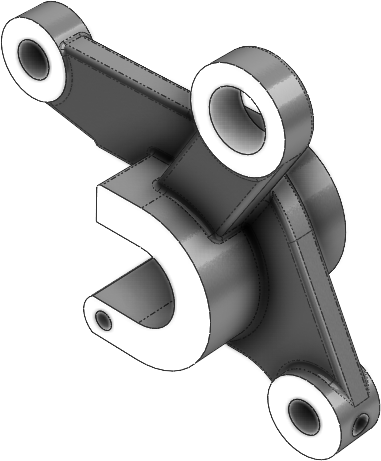 Step 8 - Realize you've forgotten to cut the notches. Don't forget there is a mirrored copy just visible via hidden detail on the original drawing. This is that '51' dimension again... 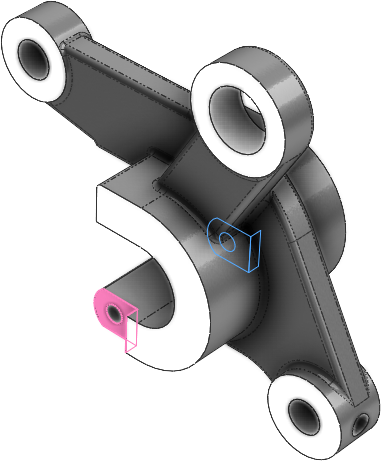 Not the answer you're looking for? Browse other questions tagged technical-drawing drafting drawings autodesk-inventor or ask your own question.