I have a friction damping system which is exited by a harmonic force FE (depicted on the left side). Is there a way to convert the friction damper to a linear or nonlinear damper, such that the damping at a given excitement frequency is equal?

I am only considering sliding friction.

A reasonable approximation would be sufficient as well. Any papers or articles on the topic would also be highly appreciated.

In general this is impossible, because for a given value of $F_e$, the friction damper dissipates a fixed amount of energy per cycle of vibration independent of the vibration frequency.

The only way to approximate this with a viscous damper would be to make $C$ a function of both the $F_e$ and the frequency $\omega$, which won't produce a useful equation of motion except in the special case where the machine only operates at one fixed frequency $\omega$.

Aside from that issue, a general way to make the approximation is to model one cycle of the stick-slip motion of the friction damper and find the energy dissipated during the cycle. Then choose $C$ to dissipate the same amount of energy.

For a simple slip-stick damper you can do this from first principles, though the details are messy, and you need the complete equation of motion of the system - you haven't specified how the mass and/or stiffness are connected to the damper.

A more general approach is to use the so-called Harmonic Balance Method to produce a numerical approximation. There are many variations on the basic idea (and many research papers describing them!) but one implementation is the NLVib function in Matlab.

The problem when trying to replace coulomb damping (friction) with viscous damping is that it produces a relatively constant force ($- \mu \cdot N$). (the sign is opposite to the sign of the velocity).

Viscous damping on the other hand is proportional to the velocity. $c\cdot \dot{x}$.

Therefore, its not always possible to substitute the one for the other.

The presence of the absolute value makes this DE difficult to solve analytically, so the most common solution is numerical.

I think a hydraulic device could approximate it.

General concept: For each direction: a spring-loaded check valve (ie with a cracking pressure) in series with a small-diameter-tube would realize a roughly constant pressure difference, as long as there is some very small flow (i.e. cylinder movement). This could then operate a pilot valve, opening the larger main valve, allowing much more flow once the pre-set amount of pressure (i.e. force on the cylinder) is reached. 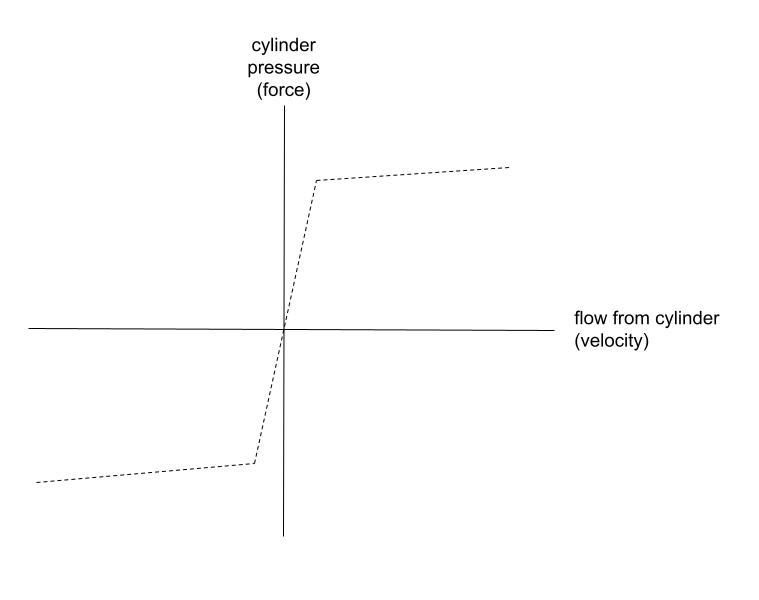 (it wouldn't be this neat in a real implementation)

Not the answer you're looking for? Browse other questions tagged mechanical-engineering friction or ask your own question.

5
Quantifying and measuring friction under extreme conditions
3
Suggestions for low friction surface materials for a "beltless static treadmill"
2
Good material for friction disk for a torque hinge?
7
Deriving the amplitude of a coulomb (dry friction) damped spring
1
Mechanical device that creates friction when rotating?
2
Materials to use for a low friction cable-pull
0
How to calculate the viscous damping coefficient given drag force
0
Friction factor for wormgear design materials
2
Friction versus ratcheting pawl