Assume that force is applied to a material like a rope, steel cable or a beam until it tears apart.

Does it make any difference for the breaking point if the force rises slowly or really fast?

Yes it can make a huge difference.

However, this will be very much depended on the material and its behavior.

There are two factors that can have an effect:

for example, strain rate is known to have a significant effect on steel: 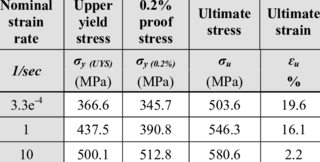 As you can see for increasing strain rate, the strength goes up (not that much), but the failure strain goes down (significantly). 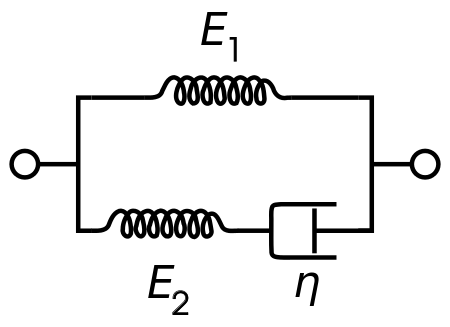 In quasi-static loading, the dashpot is not contributing to the "resistance". As the strain rate increases, the damping properties become important.

Dynamic behaviour of the structure.

During a high speed introduction of the loads, (and depending on properties like density and young's modulus), there can be development of stress waves that further increases the loads on the structure.

This is especially valid if the load introduction is by jerking suddenly the wire/rope with the hand. At the end of the pull (when there is suddenly the highest resistance on the hand), apart from the force that the arm is applying, there is also the inertial forces (deceleration from the hand). Essentially its an impact.

Every case is different.

A rope is going to flex the individual strands until one of them snaps, then the rest of strands will fail. If the tension is applied fast the process doesn't change drastically.

In steel cables if you apply the load fast you deny the individual strands from necking and they can break randomly with sharp edges.

A beam will simply bend under sudden application of excessive load and does not break. Many steel structures undergoing explosions or bombardment twist and bend, don't just tear apart.

Example for the influence of acceleration "a" - a boxer would break the opponent's jaw by a fast punch but it is not likely to occur if he presses his fist against the opponent's face with the same force applied. As the fast punch creates a phenomenon called "impact" - the recipient of the force feels a much larger force imposed on him than the original force exerted.

The other interesting fact of faster force will break up something easier than slowly applied force is "fatigue" - bend a piece of thin metal back and forth rapidly will break up the metal much faster than applying the force slowly. In the latter case, you might not be able to break the metal but weaken it.

Not the answer you're looking for? Browse other questions tagged mechanical-engineering materials material-science or ask your own question.

3
Are light coloured roofs more durable? If so, why aren't they more common?
1
How much strength does adding a T piece add?
2
Hinge or similar that breaks at a certain change in acceleration?
0
Measuring fracturability / airborne fuzziness of carbon fiber tow vs stainless steel tow
2
Latch Mechanics
0
What parameter to lower elastic elongation of a rod under tension
0
How to calculate the force of a cantilever beam at a given point of deflection?
1
Equivalent sheet metal thickness of different alloys