Why are screw holes in most of the door hinges in zigzag orientation?

What advantage does it provide? Explaining with a figure would be helpful.

I tried to draw a free body diagram and equated the sum of force and moments to zero, but still was not able to find out. 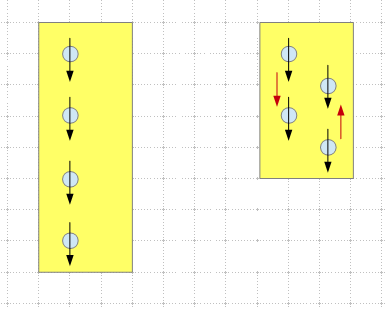 Staggering the screws will

Just adding to the rest of the answers, if the door hinge is thick enough to be assumed rigid, then the offset configuration offers better resistance to bending moments in at least two axis.

i.e: For the following reference system 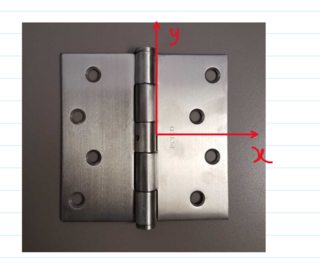 It is noteworthy, that for a pure pullout force (which is somewhat similar to the first case of Y-bending) the offset configuration will not have any additional advantage to the straight line.

So (just summing up) the zig-zag configuration offers:

It's so the screw heads on opposite leaves don't hit each other when the hinge is closed. The heads aren't always 100% flush.

Mechanically, this compromises some load cases, but not the limiting ones.

3
Free Body Diagram Problem
4
How does a pulley (with friction) satisfy equilibrium?
1
How to find the reaction forces, moments and the displacement of the fixed beam with a link?
1
Simple Free Body Diagram
0
Statical equilibrium in 2D
2
How do you calculate the shear force on the screws that connect a door to a jamb via hinges
0
Mechanics Statics: verifying reactions at supports