Why tensile test specimen is enlarged at its ends?

The tensile test specimen used for tension test has an enlarged cross sectional area at the ends. The sources I'm referring to, suggest that this is the case so that the failure occurs in the central region of the specimen where the stress distribution is uniform and is more easier to calculate (using P/A).

If what I have written isn't making sense, then if anyone could explain what would've been the problems faced with a uniform c/s area specimen, that would be enough too.

The stress is not uniform near the grip because there is a biaxial state of stress.

That is the reason that if the Cross-section was uniform the failure would start from the grip.

the mental image is the following: If you have a ballon that you apply force from one end, and at the same time you compress it laterally then it will break easier.

As far as I know, the enlarged part is used to grip the specimen.

I think the failure does not happen at the end. If its completely axial load, the whole specimen will elongate and become thin, then the failure would still happen around the middle. However, if it does uniform in cross-section, then it will have no place to grip the specimen. 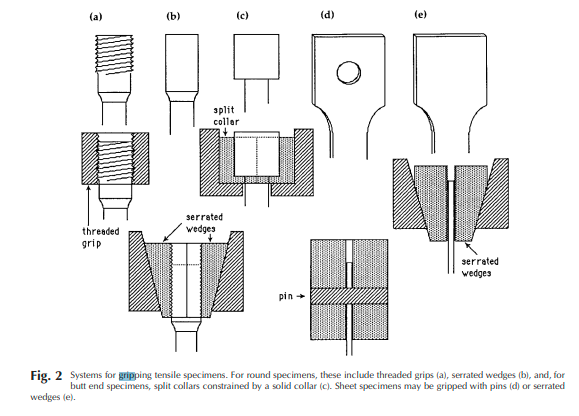 6
Why use a 'dogbone' shape for tensile testing specimens?
3
Beams in Bending: Bending stress / strain distrution
10
Why does the stress-strain curve decrease?
2
What's the difference between critical load and yield stress, and failure in general?
1
How do we know that deformations occur in a uniform fashion throughout the length of shaft?
0
Concept on two-force member
4
Why is local yielding considered the limiting case in context of buckling in Eurocode?
1
Specifications of Tensile Test Specimen?
0
Bar fixed at one end at heated