Can I create a whirlpool/vortex around a horizontal axis in a flat bottle using motor?

I am using this flat bottle:

I fixed a motor at the centre of one of the flat sides and attached an impeller. I thought this will create some kind of whirlpool effect but as you can guess, since the motor is horizontal, the water also rotated about a horizontal axis. But it did not create any much effects. I turned up the power but I was afraid my motor could not get any faster.

My question is: do you think if I install a more powerful and faster motor, it will eventually create a mini vortex/whirlpool? If you saw the picture, the width of bottle is only around 2cm so its not very taxing I think?

What I am originally trying to do is to create some kind of continuous cool effect in the bottle. I initially planned to do something like this lava lamp by using pump to continuously circulate water in oil instead of the alka seltzer but it ended up mixing the oil and water into a cloudy solution. Another option was to create bubbles but I don't like that as its very generic.

So is it possible to create horizontal whirlpool/vortex? Or is there any other cool effects you can suggest I can make? 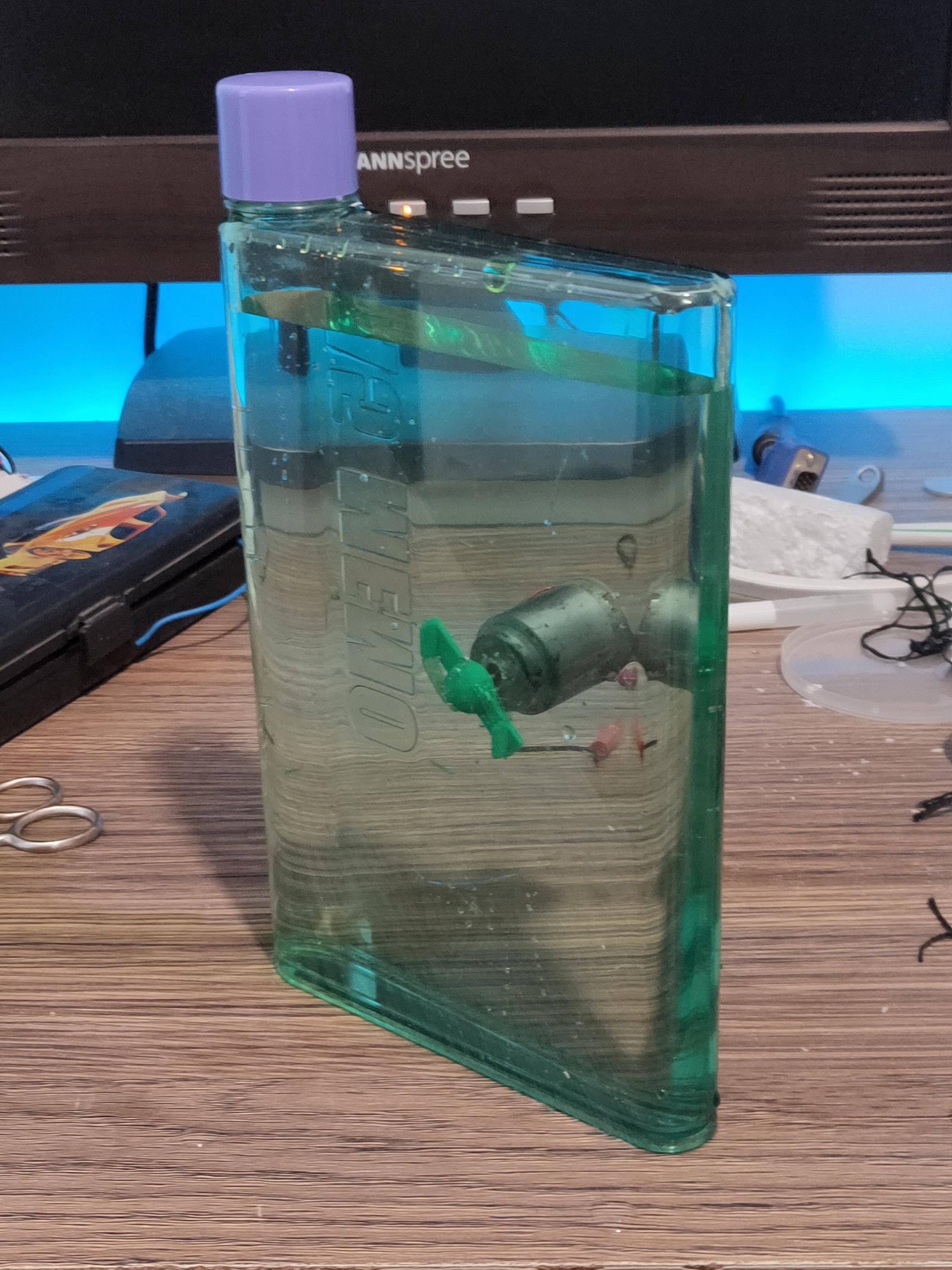 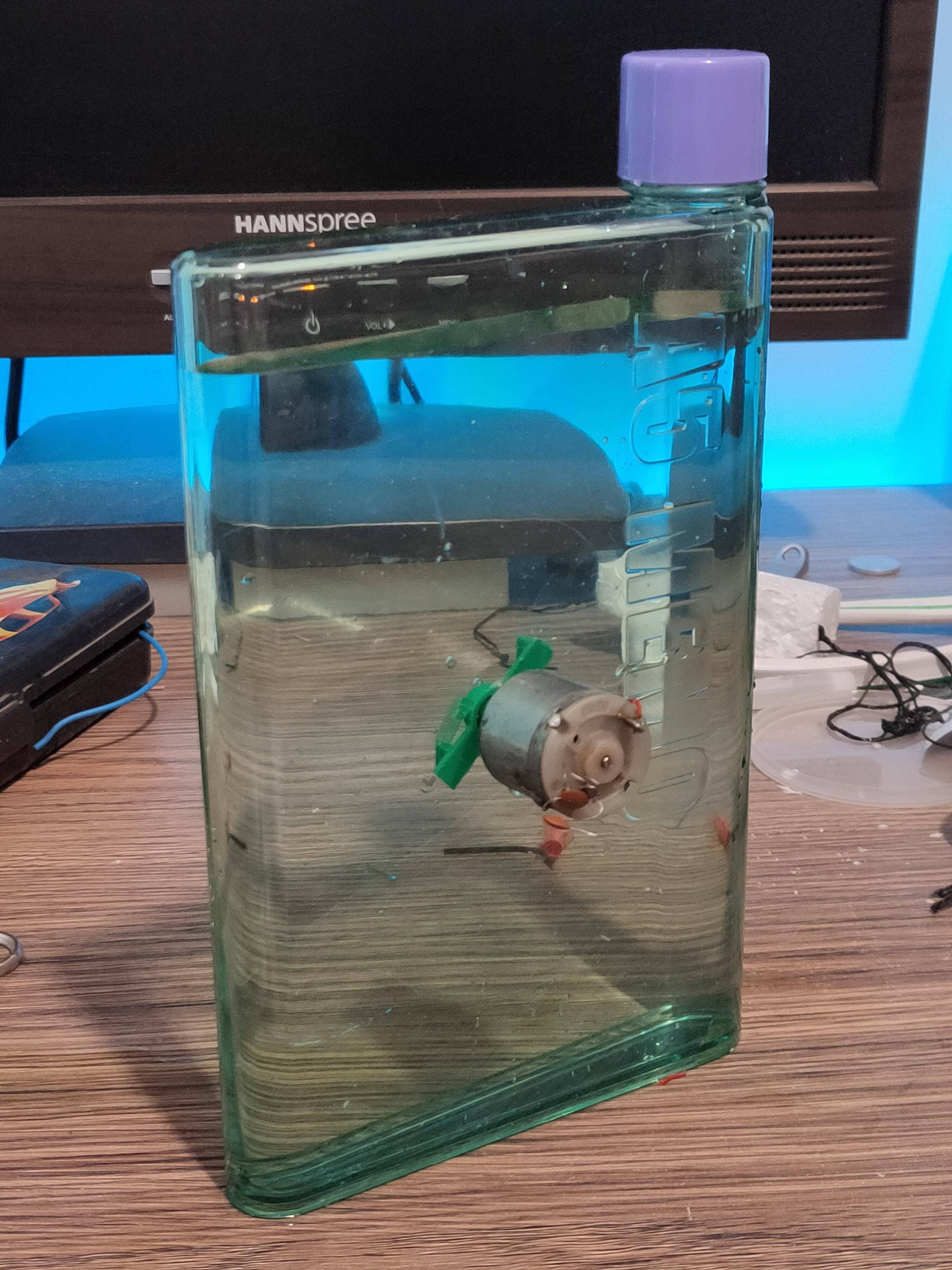 This is a very short answer on a very wide and interesting subject. 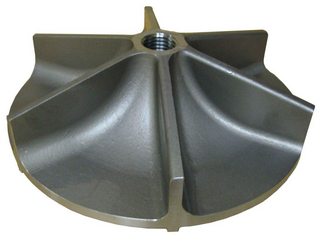 Different designs would require different power to achieve a similar effect depending on viscosity and density of the liquid.

I try to translate what you want to achieve into engineering terminology:

A process engineer designing a system to create a fine emulsion would choose a fast spinning impeller for high shear forces. So do the opposite:

Normally a vortex in a mixed vessel looks like in a kitchen mixer - upward at the walls of the vessel, inward at the surface of the fluid, downward at the center of the vortex, outward where the actuall mixer , the spinning part, is. Your vessel is so flat and the axis is horizontal so you won't achieve this three dimensional flow. Because your vessel is so flat it will likely be a more 2D flow.

The basics of the vortex are to generate varying velocity along the axis it rotates about and creating the drag effect, which involves the pressure differential. Due to the shallow depth of the bottle, I doubt the environment and geometry of the bottle meet the necessities for vorticity to occur, so, it seems unlikely.

Please read the linked articles that might provide useful clues.

What you are asking for, is called cavitation bubbles. Typically, this is a harmful phenomenon in the field of ship propeller screws. It is accompanied by vibration and noise, so likely you will not wish this will last long in your room. Visible cavitation will require more power and rotation speed than that motor gives, or smaller propeller. There are many articles and videos in the net about screw (propeller) cavitation.

Not the answer you're looking for? Browse other questions tagged mechanical-engineering fluid-mechanics applied-mechanics torque or ask your own question.

4
Tankless air compressor for electronics desoldering station
6
Multiphase Flow - Energy Coupling Parameter
4
What is this contraption?
1
What's the maximum water jet psi we can create?
1
Determining required torque for a chain and sprocket conveyor belt
1
How much energy do mass drivers need to project 1lb of material 1km/second
1
Torque Required for a stepper motor to rotate a socket wrench ratchet around an axis point
1
Torque required to rotate object around axis using Stepper Motor for Kinetic Machine
0
Replicate stepper motor with gasoline engine
0
Describe the magnitude of a force using real-life comparisons instead of numbers