Calculating Temperature of an Optical Fiber

Let's say there is 30W of light pumping into the fiber.

The diameter of optical fiber is 0.25mm.

Assuming a mass of 1g, for 6cm of fiber

But in real life, optical fibers do not get heated up, to this temperature, approximately 32 to 60 degrees Celcius.

I tried doing a simulation, with parameters:

And an internal Heat of 1W. 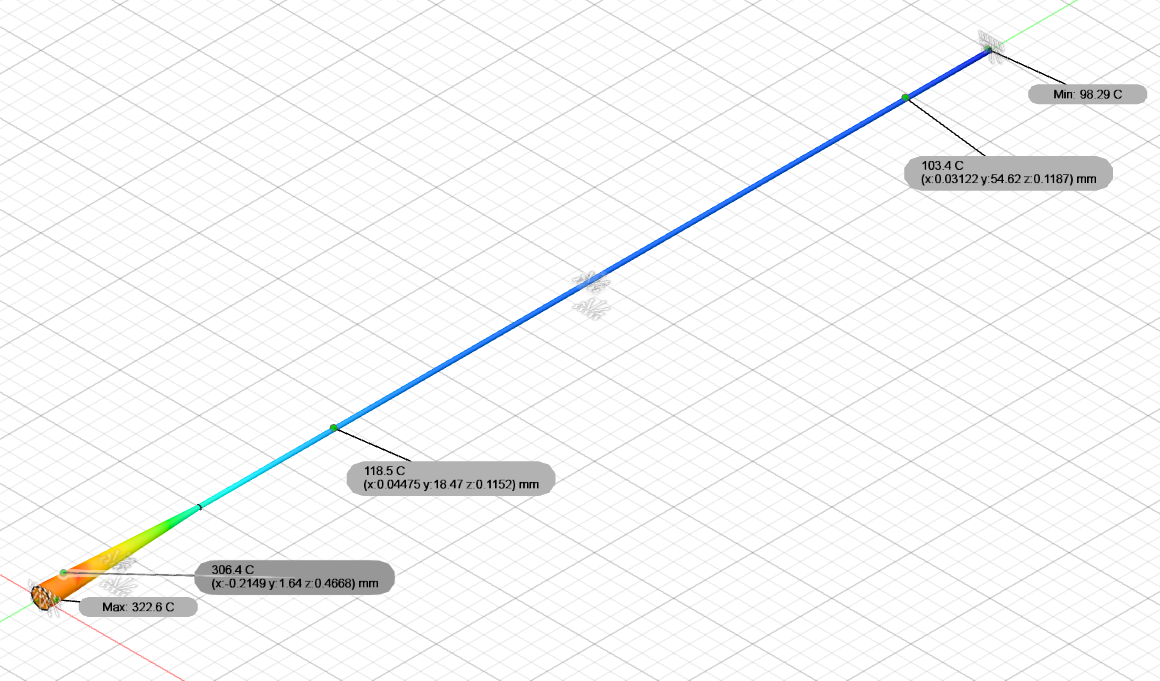 This is inconsistent with real life, ignoring other losses for fiber such as splicing and connection loss, why is this so?

If a model does not reflect reality, the model is not accurate enough for that situation. Consider some of the minutia in the workings of light.

First an alternate model for the fiber: As light passes through, some of it passes straight through, some is "absorbed." (quotes because I suggest including reflection and refraction in here as well as what is truly absorbed and transmitted at a different wavelength). Some of the "absorbed" just changes direction (reflection, refraction), some is truly absorbed and changes both direction and wavelength (some likely infrared), and some becomes heat. Heat increases temperature of the material and then transfers to materials of lesser temperature through conduction, convection, radiation. I suspect you have the heat transfer portion's model down, but the optical model needs to be refined based on the wavelength of the light and the atomic structure of the glass. Note that atomic structure at these levels would also be a function of temperature, and that light can interact with light making the wavelength fairly complex too. You can get as detailed as you need to and incorporate measured properties as necessary until your model matches reality. In fact, the very measurement that revealed the inaccuracy of the model can itself be used as a model (albeit not a very useful one with just a single point) for what would happen under those exact conditions.

Second, an alternative model for the sheath. (Even if there is no sheath, the outer surface exposed to air will have a different structure and different optical properties.) You can model it similar to the fiber, but with different properties. For example, the usual sheath will let significantly less light pass through compared to the fiber so that most of the light reaching the sheath will fall into the "absorbed" category. In other words, probably generating more watts of heat per watt of light compared to the fiber.

Finally, you may need to model the distribution of light entering the fiber, but this is unlikely unless you are looking at sub-mm of fiber or some fancy crystal structure.

For simplicity, some light goes in (30W), some light passes straight through (96.666%). The rest eventually makes it to the sheath, although a lot of it is still light that turns to heat at the sheath!

After the exchange of comments, (more specifically) that the glass is transparent, my "guess" is the following:

You state that the signal power loss is in the order of 1 W. Assuming the measurement system before and after can accurately measure the energy difference, this power drop can be attributed to the following things:

Both the above have been accounted for. However, if the fiber is transparent like glass and in the dark you can see light passing through the fiber that means that you have either optical losses (i.e. a different type of radiative), through the fiber. So the light coming out of the fiber, and not interacting with the walls (it is not absorbed and retransmitted as heat). I am not an expert on this field, but I found the following graph at fiberoptics4sale 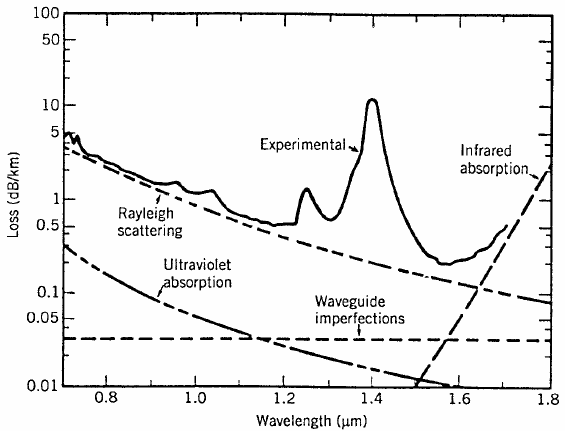 The graph shows that the Rayleigh scattering is much more important for a large portion of the spectrum (I don't know the wavelength of your light beam, so I could do much better).

In any case, the continuous 1W for such a small object is bound to raise the temperature significantly, so I would expect only a small portion of that to be converted to thermal energy.

Your assumption on temperature increase is flawed

You can't convert watts to temperature directly unless the object is perfectly insulated and the application of heat has a limited time. The equation from your link would result in a temperature increase directly proportional to time, increasing forever.

Temperature is a measure of "heat content," which changes based on heat_in minus heat_out. As soon as the fiber begins to heat up it will pass heat out from itself to the environment. The engineering work that has to be done is to determine the heat going out from the fiber.

Not the answer you're looking for? Browse other questions tagged optics photonics fiber-optics or ask your own question.

10
What is the focal distance of an optical mouse?
2
How to Determine Tensile Strength of PMMA Optical Fiber?
1
Heat loss in Optical Fiber
0
Is there any speed difference if we replace a 200-300 meters of copper cables with optical fiber cables? Whats the reason if it increases?