Why we say prestressed concrete is "more efficient"?

In my class my teacher said that prestressed concrete is more efficient, and when asked why he talk because of the constructing process. I believe because you have no cracked section hence you can use the whole section, another friend tells me because the compression from prestressing cancels out the tension at the bottom. Both seem valid, but what it really is? (If you can please cite sources)

The rebars just for the sake of being embedded in the concrete do not work! It has to be stretched to work. Hooks law, $ \ F=Kdx, \quad K = E*A$

That's why we place the rebars on the bottom not near the center of the beam, to give them elongation.

So a lot of good concrete that could be used for compression has to crack open stretching with rebar while moving the neutral axis of the beam way up wasting material to accommodate the elongation of the rebar. Just to make the rebar extend and go under tension to take the tension load.

But what if we pre-tension the rebar?

Then no need for the concrete on the bottom of the beam to stretch (at least not much), so a lot of section concrete is put to good use where it is most efficient, compression.

The beam now has much more bending moment resistance and because the lower part has not stretched it does not have a big mid-span deflection. 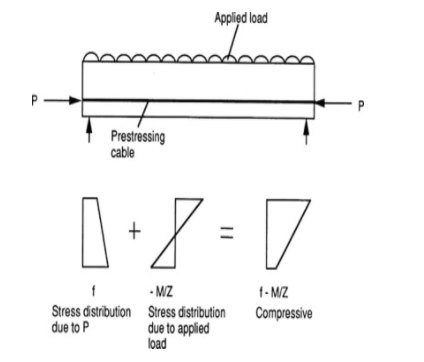 Efficiency is a relative term in comparing structures built using different materials and technologies. For prestressed concrete, it is most justifiable to compare it to its next kin - cast-in-place concrete.

i) For the same size and span length of a beam, the prestressed concrete usually can carry more load due to the superior strength obtained from the utilization of very high strength materials (high strength concrete and strands) in its construction.

ii) Unlike conventional cast-in-place concrete beams, for which deflection is usually a big concern - causing unsightly flexural cracks; prestressed concrete can eliminate a majority of the immediate deflection by proper design and tendon layout; also it can reduce the impact of long-term deflection by permitting restressing on unbonded tendons.

iii) As a result of (i) & (ii) above, the pressed concrete beam can be spanned much longer than the conventional cast-in-place concrete, which is often the most important factor in the selection of an efficient structural system - more useful open space with fewer joints.

Prestressed concrete elements are usually constructed at a convenient and controlled location, whether it is in the yard of the producer or on-site. The labor cost is kept to a minimum as there are fewer steel pieces to assemble and erect, and the erection of the standard segmental forms is less laborious and the forms are reusable. Also, the construction schedule is shortened as the prestressed beam does not require lengthy curing, and it can act as support during slab construction.

There must be other benefits that contribute to its efficiency. Let's see how others say.

Concrete performs best (and more consistently) when loaded in compression. (Putting concrete in tension is not good practice).

When a beam is pre-stressed essentially the rebars are acting as a spring that compresses the entire beam. Thus more of the material is in a state that can perform in a useful manner.

On the other hand, the rebars also perform better when in tension. Because, when the beam is prestressed, the rebars are extended and in a state of tension.

So both components of the reinforced concrete (rebars and concrete) are performing in their optimal loading conditions. So the same amount of material can achieve more in terms of structural stability. Thus the higher "efficiency" of the prestressed beams.

Not the answer you're looking for? Browse other questions tagged civil-engineering concrete or ask your own question.

7
Recipe for Roman concrete
1
How will using desert sand instead of concrete sand affect my concrete recipe?
4
Design Roller Compacted Concrete Pavement Section
2
Concrete Slab Deformation
0
How does Gypsum Concrete work?
5
Why is there this perforated pipe inside this vertical construction joint in a reinforced concrete wall?
3
Trapping heat by curing of concrete under plastic sheets
11
Why do air entrainment admixtures improve the freeze-thaw resistance of concrete?
2
How to calculate the required prestressed jacking pressure to apply to a pre-tension concrete beam?