If every action has an equal but opposite reaction, then how is acceleration possible?

Newton's thrid law states that "For every action, there must be an equal but opposite reaction". For example, if I push on a table, then the table won't move until I push table hard enough to overcome the friction between the table legs and the ground. Then I would be able to accelerate the table. But still, since I am pushing the table, I must experience an equal but opposite reaction by the table on my hand. In this case, the force that I am applying on the table is getting cancelled out by the force that the table is applying on my hand. If I just consider the table as an isolated system, then at the location of the application of force on the table, there is some force coming out of the table. They must get cancelled out. How can this still result in acceleration of the table?

When you push on a block, your hand applies a force on that block. An "opposite force" then comes into existence but exists elsewhere. It is not also applied onto the block. It is applied by the block onto your hand. Therefore there is still a net force on the block which causes it to accelerate.

They don't cancel out. Each force if it can move the object it is applying to does work on that object, otherwise it does nothing.

your hand force on the table is doing work. the reaction coming from the table is applying resistance to your body through your arms. And your body counter it by the friction of your foot.

the engine by friction force of the wheels is pushing the train by 1000 ton force. but the train is reacting by same force back. so the links on the engine get crushed under this load even though they have shock absorber. and they get replaced by maintenance crew.

IMO, Newton's Third Law defines the limiting state of motion. As shown in the illustration below, if $SF_1 = SF_2$, it is in a state of force equilibrium, thus no motion. If one of the reactive shear fraction forces is less than the other, then, the smaller one will slide. It is possible to return to the equilibrium after the smaller one is repositioned (lower the body and extend the hind leg) to gain an advantage ($\Delta F = \Delta ma$) 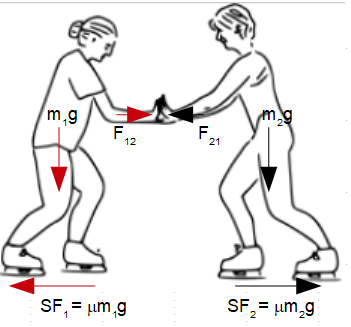 Another example: Note additional work is required to start the motion (pushing the block forward), which can be said as $\Delta Fd = \Delta ma*d$ 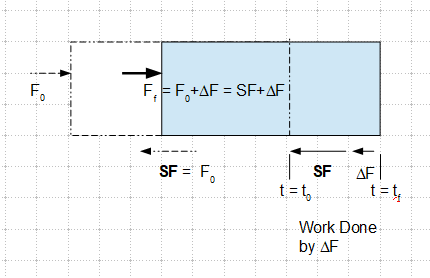 Note, this law is sometimes referred to as the action-reaction law. In the example above $F_f$ is the action and the terms combined on the right of the equal sign is the reaction. At any given moment, $Action = Reaction$. In the reaction, the term $\Delta F$ is responsible for initiating and continuing the motion until hitting a rigid subject, or you have exhausted your energy. And, it ($\Delta F$) is linked to the speed and acceleration of the block.

In our example, after you overcome the force of friction, the block starts accelerating. This generates inertia force.

Now, as you increase the force by your hand, the inertia force increases as well. The thing here is to note that you will not experience this force on your hand. This is the reason it is also called as an pseudo force. This force is experienced only when you try to change the state of rest or uniform velocity of the body which is mentioned in the Newton's first law.

So inertia force is actually a force invoked by an observer to maintain the validity of Isaac Newton's second law of motion in a reference frame that is rotating or otherwise accelerating at a constant rate.

Now considering your statement you reference frame is your own body or the block itself, which are non-inertial frame of reference.

But if your frame of reference is inertial then the force between your hand and the block is internal which will cancel each other out as explained in one of the answers given to this question.

Not the answer you're looking for? Browse other questions tagged acceleration or ask your own question.

1
Does the turboprop engine torque get transferred to the engine mount and ultimately aircraft when engine is active?

2
Calculate maximum acceleration of a car from rest (optimum launch)