Angular momentum of a multi-body system

I'm trying to compute the total angular momentum of a 3D multi-body, pendulum-like (as in, each body is connected to another one), mechanical system. Let us consider, for a simpler case, a 2D double pendulum. With some tips, I hope to transfer this to the more difficult 3D case myself. 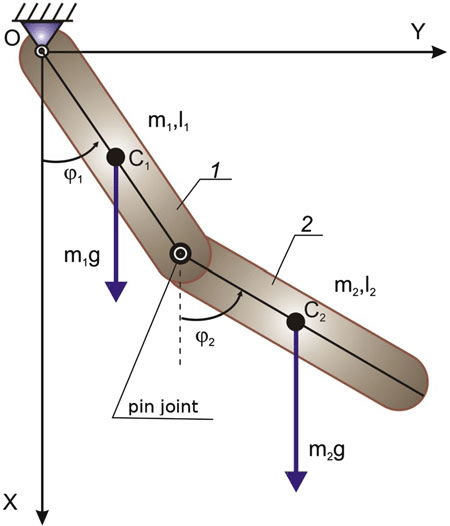 I appreciate all effort!

I'm going to give an intuitive explanation.

The idea behind the parallel axis theorem, is that if you have a rigid body, that is rotating about a point on it, other than the center of mass, the equivalent moment of inertia is how an observer on the point about which the body is rotating, will see.

For our case, let's assume that we have an observer at the pin point. in his belief, the rod number 2 is rotating around the pin point. What the observer can't see is his own movement. Now if another observer at point O looks at the hole scenario, will see a different story. each point on the second rod has a 2 speed components, one due to the 2nd rod rotating around the pin point, and the second is the speed at which the entire rod 2 is also moving because of rod 1's motion.

Is what the observer at the pin point sees, not the origin. This makes sense since the observer sees a different speed for those points, and assuming that $$L = r.P.sin(angle)$$

You can see that differing the value of the momentum (through changing the speed) changes the finalized value for angular momentum.

Now, why is the total angular momentum not equal to the sum of the two individual ones? think of this case, where the 2 rods are in one line, meaning that

So you can see it does not only rely on the sum of the squared values, rather the squared of the sum... a bit hard to get a hang of!

one might ask what is the generalized expression for this setup of pendulums? we can be certain that the initial condition has a major role, since as shown, if the 2 angles are equal, the scenario is totally different in a another scenario (in fact so different it's used as a classic example for chaos).

For that, you need to write down expressions (in their vector form ofc) for the distance of points on the second rod from the origin, and their velocity, and from their you will arrive at your final expression. If there are issues there, probably edit and add here or post a new question.

Not the answer you're looking for? Browse other questions tagged mechanical-engineering beam or ask your own question.

0
will a force with same frequency as natural frequency make system resonance (in multi-dof)?
1
why does the body have an no angular acceleration if the applied force passes the center of mass?
0
Simulating linear momentum/KE through angular momentum/KE
0
Momentum of a free-floating body being hit by a projectile
0
Does angular velocity of a body rotating on top of another rotating body add up or multiply?
0
Steering with momentum
0
Calculate press tonnage from impact momentum
0
Mass inertia tensor for rod non-symmetric regarding coordinate system origin
0
Can an angular momentum vector be a couple vector?