I have always wondered why the diesel electric submarine industry has not kept pace with the consumer market for high power/energy density batteries. We have seen a historical transition from lead acid, to nickel-metal hydride, to lithium ion batteries in the EV market.

With a few exceptions, like the last bunch of the Soryu class which have implemented lithium ion battery technology, most modern high tech diesel electric submarines still rely on lead acid batteries.

I have heard many arguments on this topic, but have found none of them to be particularly persuasive. These include:

Counter: This doesn’t account for space, which is vitally important, and lead acid batteries have relatively poor energy density.

B) Lithium ion is too hazardous; safety is important on a submarine

Counter: Nickel cadmium and nickel metal hydride are just as reliable in terms of charge cycle duration, and the latter has even greater specific power capability.

D) There’s an issue of cost

Counter: Yes lead acid technology is particularly cheap. But this doesn’t account for the high end diesel electrics (e.g. Type 212) which use expensive fuel cell technology along with modern electronics. It’s hard to believe that cost could be an issue considering that lithium ion is even more expensive than the alternatives listed, and is nevertheless (finally) being adopted in rare cases.

So what gives? Why was there and still is a battery technology lag in the diesel electric submarine industry? Especially since underwater endurance is one of the most important characteristics of such submarines.

Counter: This doesn’t account for space, which is vitally important, and lead acid batteries have relatively poor energy density.

From Appendix: Calculations for a full 70-day mission on one battery charge: 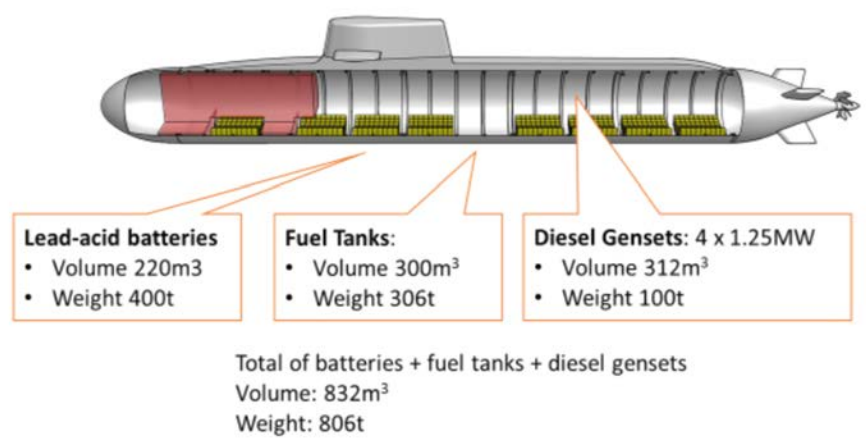 A lead-acid battery is about 13% of the displacement but only 3% of the volume of a 3,000-tonne conventional submarine. So if the 400 tonnes of lead–acid of a 3,000-tonne submarine are replaced by a light-metal battery, the volume will be the same (3% or about 220m3 ), but more weight must be added low in the submarine to keep its weight, stability and trim in balance

Lead-acid has a low energy density but a high mass. Lead-acid batteries supply power AND mass. If you replace them with lithium, you'd save space, say at least 50% giving you 1.5% more volume, but you'd have to replace it with more solid weight for trim, so not really. In any design, everything is a trade-off. 13% of displacement at 3% of volume seems like a reasonable trade-off. So A) is true.

B) Lithium ion is too hazardous; safety is important on a submarine

The size, type and design of a submarine battery must be matched to mission requirements.

He argues (and I agree) that battery selection is a key consideration in the design process.

Nearly all proponents of lithium-ion or light-metal batteries concentrate on the high energy per kilogram characteristic.

Due to the very high short-circuit currents and fast rise times, a lithium battery will need fire-hardened boundaries and advanced electrical protection systems. Each of the thousands of 500-amp-hour modules will need to contain safety-critical software-driven electronics to control voltages and currents within strict limits. At some stage during the life of the class, we could expect some failures. That would not make a good safety case for a submarine.

Interestingly, the UK Ministry of Defence has awarded a contract to develop a new chemistry battery to replace the existing lead–acid emergency backup batteries in the Royal Navy’s Astute class. It’s chosen not to use lithium-ion but rather nickel-zinc due to its substantially safer chemistry and high energy density.

Lithium ion does tend to burst into flames if damaged, which would be a problem on a sub. There are many battery technologies (existing and experimental) with greater energy densities. But subs are military and it does take time and money for mil spec certification and ultimately we are dealing with supply and demand. How many subs are built? How long does it take to get from design to water? Lead acid is still being used because it is a proven technology and there is no incentive to innovate. As far as the military is concerned, lithium ion is new technology. But new battery technologies are being considered.

So B) Counter is true.

Counter: Nickel cadmium and nickel metal hydride are just as reliable in terms of charge cycle duration, and the latter has even greater specific power capability.

Ni-Cads suffer from memory effect, which essentially means if you discharge them partially and recharge them, the cells remember this level and will not go beyond this point. Fixed by cycling, full discharge and charge cycles.

Lead acid batteries have the lowest specific power compared to other technologies. Small commercial batteries in lithium ion and nickel metal hydride are different from large batteries in submarines.

Each of these technologies is greater than lead-acid (Lead Antimony) from a energy density perspective and full discharge cycles (mostly), but neither Ni-MH or Li-ion have a projected useful life. Naval Architechs and the military are conservative. As far as they are concerned, new battery technologies are unproven and they will resist and not risk lives to use a new technology despite obvious energy benefits. Vessels like the Yara Birkeland, which is a fully autonomous, 120 TEU container vessel powered by lithium-ion batteries will allow the technologies to mature and issues to be worked out.

‘Fought to the last’: The ‘desperate’ final moments of Russian’s doomed Losharik sub

Kommersant reports Losharik had recently been refitted with Russian-made lithium-ion batteries, replacing the silver-zinc batteries initially installed more than a decade ago.

This will not help the adoption of lithium-ion batteries.

D) There’s an issue of cost

Counter: Yes lead acid technology is particularly cheap. But this doesn’t account for the high end diesel electrics (e.g. Type 212) which use expensive fuel cell technology along with modern electronics. It’s hard to believe that cost could be an issue considering that lithium ion is even more expensive than the alternatives listed, and is nevertheless (finally) being adopted in rare cases.

It's the military. Hard to see how cost of any system is an issue!

My true answer to Why do modern diesel electric submarines predominantly use lead acid batteries? is the same reason as why lead acid batteries are still used on commercial ships. Maintenance. You can pop the individual cells and test the electrolyte density to detect bad cells and bad batteries, add distilled water to replace evaporated, check batteries for corrosion, etc.

Tour of Battery Room on Zero Cat 120. You have to rely on electronics to identify bad cells.

Not the answer you're looking for? Browse other questions tagged battery or ask your own question.