Ask Question
Asked 1 month ago
Active 1 month ago
Viewed 93 times
-1
$\begingroup$
Closed. This question is opinion-based. It is not currently accepting answers.

I watched a video about ancient monuments and mega-structures, found here: https://youtu.be/khjdheYDhiw?t=328

Each of the foundation stones for one of the ancient structures weighs more than 1,000 tons. Another stone shown weighed over 1,600 tons.

It's not clear how they moved such massive stones, but one obvious possibility is that they used human power (perhaps via a long rope system).

I know there are many factors to consider that could complicate this such as what the incline/decline is, how the rope system distributes the weight, and the friction caused by the type of surface it's being pulled on. But I'd like to simplify this as much as possible. So imagine a perfectly flat plane with a sand or dirt surface. 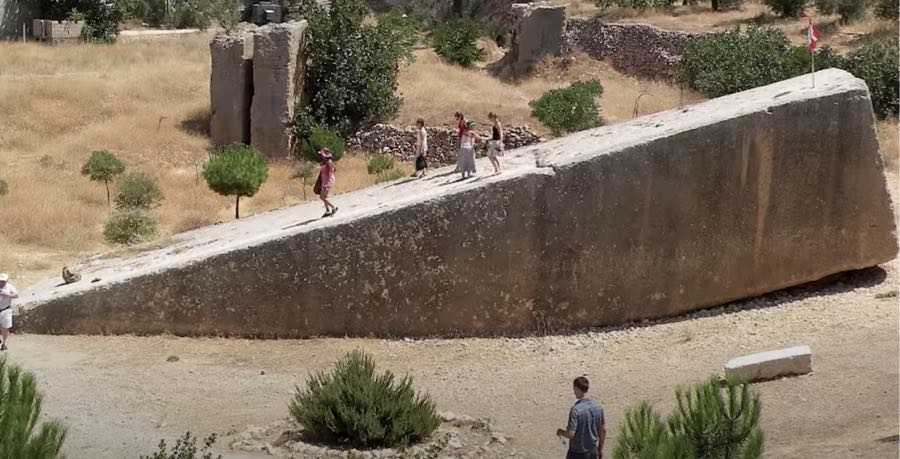 This is not an answer. It is an extended comment on why this calculation is impossible - IMHO - to be accurately answered.

For the calculations, I'll assume that the maximum pull force of a person on a rope is on average his body weight (think about pull ups - although many people can't do them). So a 80 kg person can produce a 800 N push force.

I will take the simplest case. I.e. a flat plane, with rigid surface (no dirt), and assuming you have perfectly round (and rigid) logs. In that scenario, the friction between the floor or the logs would not be affecting the rolling (there will be no friction losses because there will be only rolling).

In that case, only one person could actually move the mass - albeit very slowly. He would actually be able to consistently accelerate it, with an acceleration of:

so it would take him about 40 minutes at full force to get this stone to move at 1[m/s].

The moment you move away from the above assumption, (perfectly round log, or rigid surface) essentially the following condition occurs

In this scenario, you need to have a lot more information (i.e. internal angle of friction for the sand/dirt, thickness etc) in order to determine the forces of resistance.

In the worst case scenario (almost) where people would just drag the stone on a flat plane - without any wheels, then the coefficient of friction would play a role. Assuming a value of 0.1, then you'd still need to apply a force of $\mu\cdot W=\mu\cdot m\cdot g= 1600000 [N]$, that would mean that you'd need about 2000 people of average weight of 80 kg.

The simplest weight-moving mechanism in ancient times is pictorially shown below. The weight was placed on wood logs and rolling ahead. The movement was done by the pulling and pushing of the slaves using ropes, rods/levers, and hands. You can estimate the number of slaves required if you know the following parameters - $W$(weight), $\mu$(rolling friction coefficient), and pulling force/capacity per person.

Now, estimate the number of slaves required to initiate the movement:

The rolling coefficient can also be expressed as $\dfrac {\mu}{r}$, in which $r$ is the radius of the log (wheel). 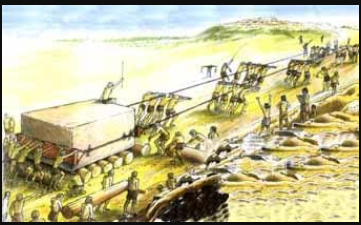 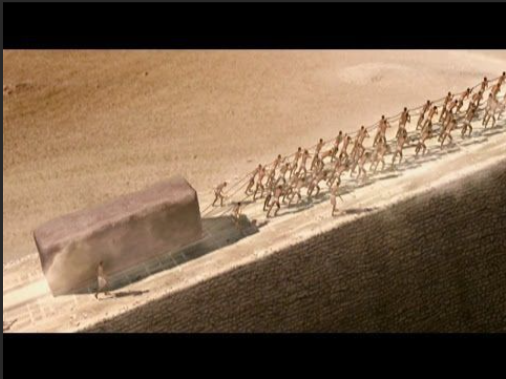 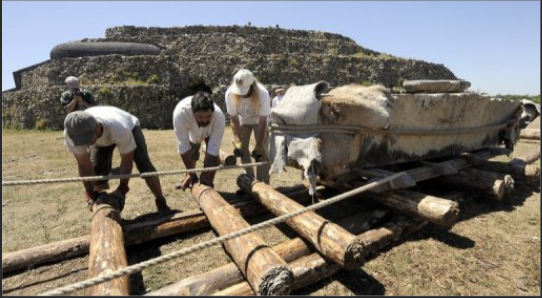 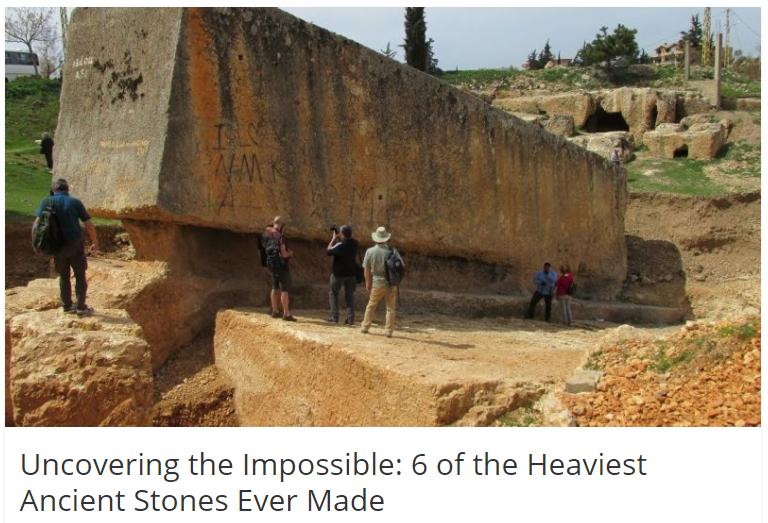 Note: This technic is still in use today when there is a need to move the entire house (less foundation) from one location to the other without tearing it apart.

5
How many units of HB are used for steel bridges?
17
How many train passes can railway tracks endure?
5
Is a Transatlantic tunnel technically possible today? How feasible would it be?
3
Definition of stiffness for structural dynamics: How would you find the stiffness of an unusual beam directly?
1
How would you calculate the force needed to rotate along the x axis vertical earth anchor in dirt?