I need a mechanism to switch the vertical position of an assembly in as square a profile as possible - i.e. a normal crank mechanism produces a sine wave profile, to explain myself better. I've seen some quick return mechanisms (and this) - these obviously travel slowly in one direction and 'quick return in the other - I need the same thing, as quickly as possible, and in both directions.

You can adjust the contours of the cam to create a more square profile.

The following mechanism also has a squarevelocity profile. See video at 0.29 for an animation 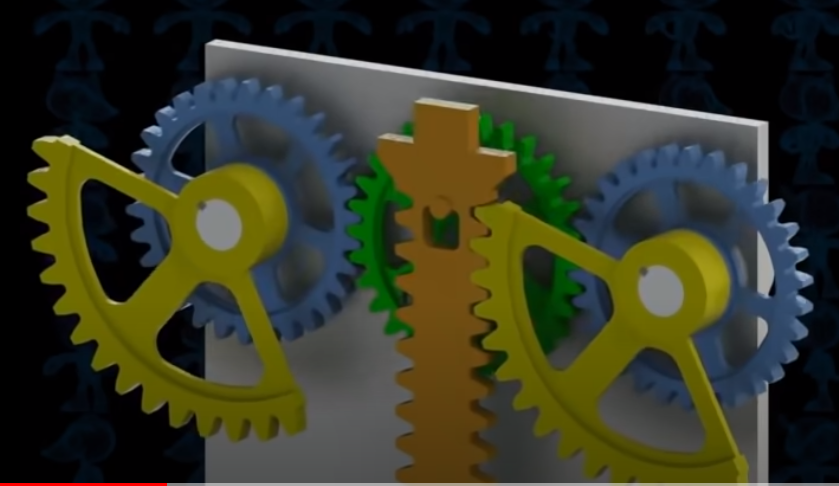 There are linear actuators different versions e.g. with a solinoid or with a planetary gear system e.g. see.

However if they are applicable to your problem is depended on :

There is a four-bar linkage that will do the trick: it is the mechanism in an old-school movie camera which engages the sprocket holes in the film, jerks the film down suddenly to the next frame while the shutter mechanism is shut, and then resets as the shutter opens.

Obviously you can not make a perfect square wave with any mechanism simply because they would need a infinite speed, acceleration, jerk (snap, crackle and pop). So no discontinuous functions and some finite raise time.

So from a design perspective there are many possible places to look at solutions. But the locations where I would concentrate my efforts are

First cams. Like said the canonical cam to start out with is the modified scotch yoke with a dwell because its simple to understand and easy to reason with. (not because its the best possible cam to do this, but gives you some insight into cam design in this case). The cam you got in @NMechns answer is okay but read a bit further when i talk a bit on the details of cam design. So the 2 dwell scotch yoke looks as follows: 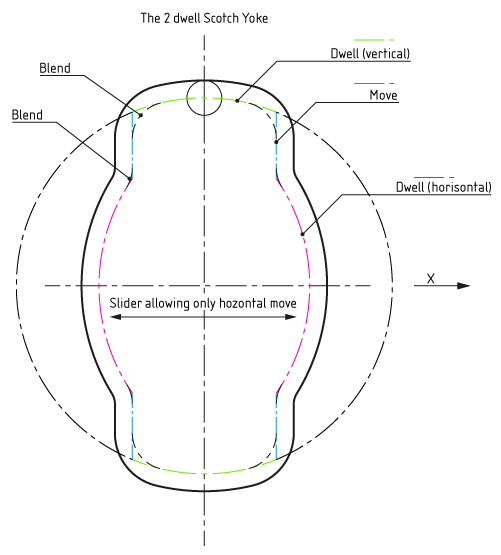 I have added an dwell in both the horizontal and vertical of the yoke. Just to show they are possible, other dwells could be built. each dwell consists of a offset base circle. The two dwell is not the one you are looking for but im just showing it for completeness, image 2 shows its movement function and its relationship to a non modified scotch yoke.

image 2: Graph if the x movement.

In reality you don't need the scotch vertical dwell you only need the horisontal one See image 3. In fact you never see the vertical dwell in practice because its problematic.

This should give the intuition needed to design the internal cam you need. If you need a faster raise time you can just slant the move lines a bit inward.

The role and shape of the blends

Remember when I said that you can not have discontinuities in your graph. Well if you do have discontinuities then your system is going to bounce. In general bad things happen if you bounce, either the cam follower loses contact or it causes a huge load in the rest of your system. The secondary result is that this causes the surfaces to erode reducing mechanism lifespan dramatically.

So for any high speed cam all of your shapes have to match:

Now these functions are a bit tricky to work with. But literature has good candidates.

Other things to watch out are:

Could a four bar do the job?

Not alone. I tried to find a suitable four bar in my catalog of known paths. No suitable on hit my eye. Its still possible i don´t have easy access to a four bar curve fitter so who knows. But a six bar can do it.

However, you can take a bi-stable mechanism and drive with a crank rocker. Then you could do this. The plus side is that this could be really fast. I dont have time to sketch this out but imagine a rocker next to a electrical latching switch and the rocker has two pins that move it form state to another one when moving back and one when moving there.

Anyway i dont have much more time for this.

Not the answer you're looking for? Browse other questions tagged mechanical-engineering mechanisms linear-motion or ask your own question.