Do windows add to strength or rigidity?

A friend who repairs washing machines told me that the window adds rigidity to the front cover and compresses the gasket. Also the windows of cars act against shear forces, he said.

Do you know anything on this? Are there more examples where a window is not just a hole but adds strength/rigidity to a structure?

Well, "adds strength" relative to what? A single-piece continuous hull is the strongest & most reliable but you can't see through it. Adding a windshield to the windshield frame of a car makes the structure much stronger than the relatively thin rectangular frame itself.

When weight is a concern, as with the beams and cross-braces on a bridge, a lot of material can be removed without significantly affecting the member's bending or shear limit.

Regarding the washing machine door, the glass will indeed give additional torsional and bending rigidity (strength is another matter). 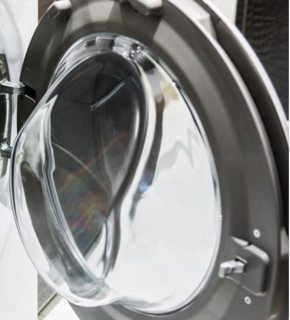 Although the glass has lower stiffness modulus, because the center line is offset due to the glasses cross-sectional area it increases the second moment of area I (bending) and polar moment of area $J_P$.

The $I, J_p$ are controlling bending and torsional deflection.

Regarding the car windshield, again the rigidity increases. The easiest way to explain it is with the following picture. The difference between rigidity is too much 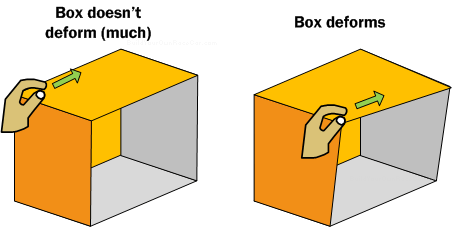 figure: box with sides vs boxes without sides (source: buildyourownracecar)

Take the extreme case; an aquarium. With no glass it is a handful of silicone rubber. With glass, it easily hold hundreds of pounds of water ,etc.

No, I would say in many cases they actually take away from the resilience and ductility of the structure. Let's look at two examples.

1- A driver loses control in a turn and the car starts to roll over.

The windshield will keep the cab rigid to some extent till the forces of the rotation and impact build up reaching a point where the glass shatters. The front window columns and the frame of the cab are suddenly exposed to sudden forces acting as a sledgehammer with large acceleration, causing it to a sudden collapse.

While if they had been given a chance to load gradually as the roll progressed, they could possibly deform slowly and take the crash impact. They are designed to do that, one hopes.

2- A 2-3 story building is subjected to an earthquake and the first-floor windows glasses randomly hold on for a while offering extra stiffness to the first floor while the floors above have taken the brunt of the lateral force and drifted excessively. Then suddenly the glass shatters and the first-floor framing which was not allowed to deform (read helping support lateral loads) is jerked into taking large shear and moment forces, leading to catastrophic failure.

Structures perform better when they are acting homogeneously and deform continuously and uniformly.

in response to a comment i thought i should elaborate.

In structural design, codes call for structurall seperation of the glazing and such partitions as tiled walls or stone slabs from the frame by flexible fasteners, expansion joints, or if not possible by discouraging the design by requiring penalty load factors.

Glass is lacking a very important property of steel, ductility. meaning it would fail catastrophically if stressed beyond its limit, while steel can be deformed at stress levels much beyond its yield point while still absorbing a lot of energy and offering safe exit.

In fact in new cars the windshild gasket and glue are designed to pop out in severe accidents to give the framing a chance to pereform, and obviously reduce the chance of the glass shards flying like shrapnel into the cab. Luxury cars have even air-bags and self deployed curtains to protect the passengers from side window glass.

Not the answer you're looking for? Browse other questions tagged stresses structures or ask your own question.

4
What angle - for a strut - provides the greatest vertical strength/support for a cantilever?
1
How much strength does adding a T piece add?
1
Breaking strength of stainless steel bar
4
Tensile strength to weight conversion
4
How to determine tensile strength while the normalised tensile strength is known?
2
strength of eggshell
4
How does stiffness/rigidity affect the bending moment of a beam
0
Mechanics of Solids / Strength of Materials
2
Strength of bolts
1
Mechanics: example of less mass/volume gives more strength