Why does thermal conductivity of a pipe matter in a double pipe heat exchanger?

My understanding is that thermal conductivity is responsible for the time until something will heat up. For example, if you hold a copper bar over a candle it will quickly become hot at the other end. If you instead hold a brass bar it will take a longer time, but the end result will be the same.

If this is correct (is it?) then why does thermal conductivity matter in a double pipe heat exchanger? It will take some more time for the pipe to heat up and start transferring heat, but once that happens it's all the same, is it not?

Since the rest of the answer is too long I will start with an example.

Imagine you could build a heat exchanger from wooden pipes. If you run through the liquid you would observe very little efficiency (i.e. the hot liquid would remain hot and the cold cold). There would be too little heat exchange, because the wood would not allow heat to pass through the material at any significant rate.

You have to remember that the problem of heat transfer between the hotter fluid (h) and the cooler (c) is a combined conductivity and convection problem. 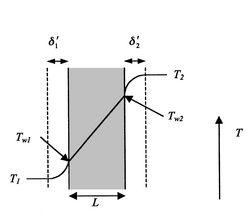 Steady state of a heat exchanger

The problem with heat exchanger is that they come into too many flavors. Usually you encounter the parallel and the counterflow (but there are several others). Below is the example of those types of heat exchangers. In this image you can see the temperature difference 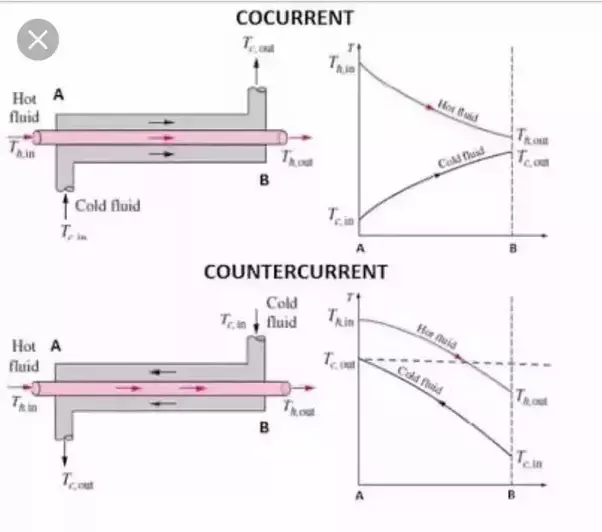 figure: Temperature difference along the length of the heat exchanger for different types of flows

In that image you can see immediately the problem. If you have a heat exchanger with a parallel flow you will have different temperature difference at different section of the heat exchanger (thus different heat transfer rates because the $\Delta T$ varies). (The same problem exists with the counterflow to a lesser extent.)

However, this is the temperature distribution of the steady state.

The transient state is (in the simplest case) when the heat exchanger starts its operation. Then the fluid that passes can be assumed to have a uniform distribution (i.e. does not change with location).

From the previous paragraphs, I was trying to highlight that the steady state will have a temperature distribution along the length of the heat exchanger that should remain constant (wrt to time).

However as we've seen before as the thermal conductivity (k) increases, then thermal resistance R decreases, and as R decreases the heat transfer rate increases. That means that:

for increasing thermal conductivity (k), there is more heat transfer for the same temperature difference.

Since in the steady state the temperature difference is constant, the heat exchange will be dominated by the thermal resistance, and therefore it would be affected by changes in the thermal conductivity.

Why is the effect not pronounced in metals

The reason the heat conductivity effect is as not pronounced in metals is that because Thermal Resistance R is determined by the equation:

Then, the lowest of the $h_1$, $h_2$ and $\frac{k}{L}$ will have the dominating effect on the heat conductivity. Since usually $h_1$, $h_2$ coefficients are significantly lower than $\frac{k}{L}$ (unless L becomes too great), any change of thermal conductivity is not affecting affecting significantly the thermal resistance. (this is exactly the point mart's second paragraph is trying to raise).

To my best knowledge, thermal conductivity is secondary consideration in most double pipe applications because the pipe wall will be very thin compared to the rest. Actual heat transfer through most HX is mostly determined by flow conditions.

I didn't realize how confusing the terms could be for a heat exchanger until I started typing it out:

I will refer to the hot side as:

I will refer to the cold side as:

The final temperature of something is all about the equilibrium between the heat flow in and out of a system. There is always heat flowing into and out of the system

So what happens if the cold fluid is removing heat faster than it can pass through the walls of the pipe from the hot fluid?

So if your goal is to raise the cold fluid to a given temperature, you need run a hotter fluid than you otherwise would (or run more of it relative to the cold fluid).

If your goal is to lower the hot fluid to a given temperature, you need run a colder fluid than you otherwise would (or run more of it relative to the hot fluid).

Not the answer you're looking for? Browse other questions tagged mechanical-engineering heat-transfer heat-exchanger heat or ask your own question.

1
thermal resistance and thermal time constant with ambient temperature
2
Thermal Conductivity of a Layered Composite
2
How to periodically shut down a recirculating hot water solar thermal system
1
Heat Exchanger Design (Log Mean Temp Difference or Epsilon NTU Method)
0
Aluminum or Copper, which one is better to control and maintain the temperature?
0
Arithmetic and Log mean temperatuer difference of a double pipe heat exchanger with parallel flow
3
Can aluminium foil be a thermal insulator?
0
Thermal Conductivity and Energy gain