I currently have a 6hp IC engine which I plan on using to drive the rear axle of a go-kart. I want to increase the torque delivered to the shaft by adding an electric motor in a sort of parallel hybrid drivetrain configuration.

What do I need to ensure neither power source is harmed and the torques add as intended? I'm assuming some sort of transmission is necessary but I am unclear on what exact type would be needed since I was planning on the kart having only one speed.

A differential gear - similar to the back axle of a rear-wheel drive car - might be good. IC engine goes in one side. Electric drive goes in the other. Power to wheels is taken off what would normally be the drive shaft.

It seems to me that this should allow either power source to stall and the other to provide drive but at half speed (if speed of both drives was matched to start with). It therefore would seem sensible to put the gearbox after the differential.

Hopefully this gives enough inspiration to cause you to abandon the project!

One commercially viable solution is that one of the Toyota Prius. The basic idea is the following (apparently there a few changes over the years since 1997 introduction): 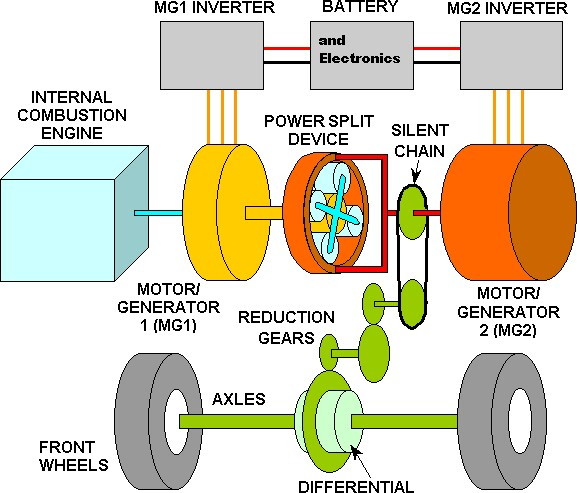 Here you can see MG1 and MG2 which can act both as motors and as generators. From what I understand MG1 utilizes this additional speed of the engine to produce electricity by acting as a generator. The electricity is fed to MG2 which acts as an electric motor and provides torque to the wheels.

And MG2 (Secondary motor-generator): in electric only mode is used as a motor to drives the wheels and additionally is used in regenerative braking as a generator to produce power for the battery energy storage while braking the vehicle. 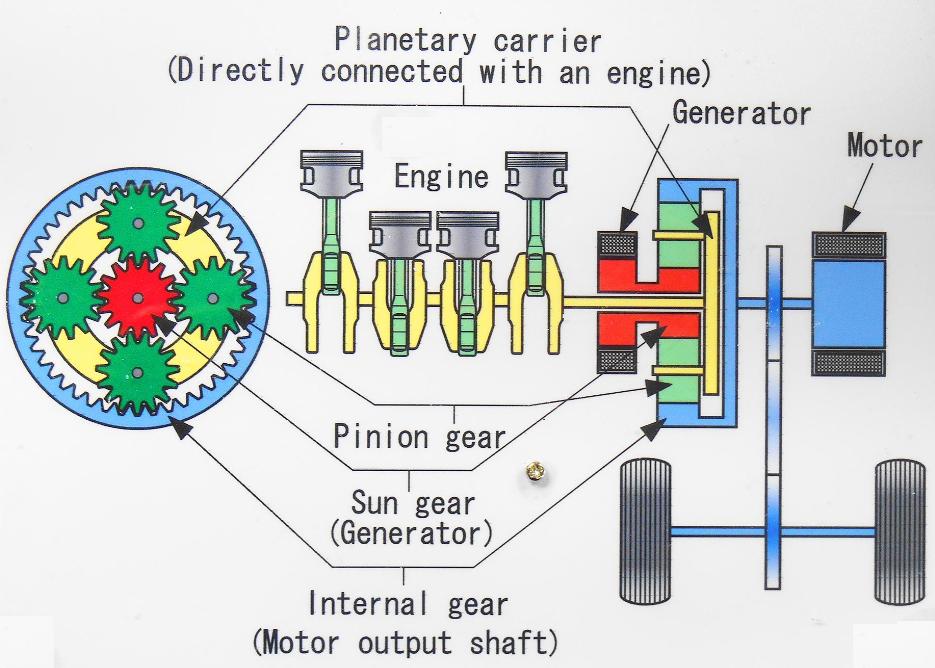 Finally , I agree with the opinion that this a bit too much as a project to undertake on its own.

There is a lot of literature on the web, just describing the toyota prius system (and I am guessing you can find a lot more for other cars)

2
How can you sync an electric motor with an IC engine?
0
Advice for designing internal structure of glider wing
1
Max torque given in engine specification is indicated torque or brake torque?
1
Does the engine size affect torque and RPM?
0
Is electric motor torque determined by Kv or by power (watts)